BRUSSELS — The European Union early Saturday abruptly reversed an attempt to restrict vaccine exports from the bloc into Britain, the latest misstep in the continent’s faltering vaccine rollout.

The bloc had come under harsh criticism on Friday from Britain, Ireland and the World Health Organization when it announced plans to use emergency measures under the Brexit deal to block Covid-19 vaccines from being shipped across the Irish border into Britain.

The reversal came as the European Commission and its president, Ursula von der Leyen, were already under fire for the comparatively slow rollout of vaccinations in the 27 member states, especially compared with Britain and the United States.

The Commission announced the restrictions without consulting member states or Britain, a former member — unusually aggressive behavior that is not typical of the bloc, said Mujtaba Rahman, the head of Europe for the Eurasia Group, a political risk consultancy.

“There’s clearly panic at the highest levels of the Commission, and the issue of the Northern Ireland agreement has been swept up in this bigger issue of the E.U.’s poor vaccine performance,’’ he said.

The drama unfolded just as the bloc’s plan to vaccinate 70 percent of its adult population by the summer was unraveling. Already slow in ordering and delivering the vaccines, the European Union was hit with a devastating blow when AstraZeneca announced that it would slash vaccine deliveries because of production problems.

The initial E.U. plan for export controls brought cries of outrage from both the Republic of Ireland, a member of the European Union, and Northern Ireland, a part of the United Kingdom. Both sides are committed to not recreating any land border between the two parts of the island of Ireland.

Triggering the emergency measures in the Brexit agreement so soon after Britain left the bloc’s authority at the end of 2020 seemed to call into question the European Union’s sincerity in following through with the deal regarding Ireland — which was one of the biggest sticking points to reaching the deal. Ireland’s prime minister, Micheal Martin, immediately raised the issue with Ms. von der Leyen. 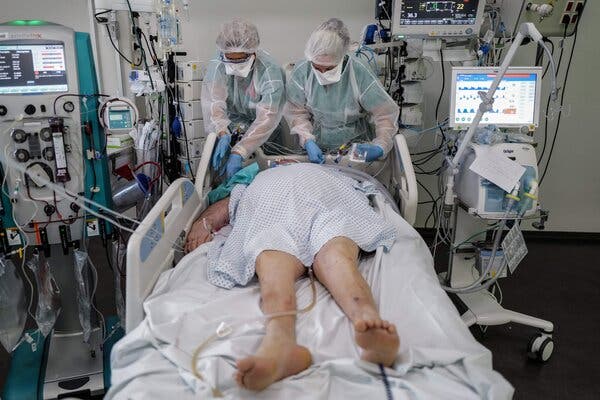 Britons who favored Brexit point to their country’s more rapid vaccination rollout as a benefit of leaving the bloc and its slower, collective processes.

Tom Tugendhat, a Conservative member of British Parliament who initially opposed Brexit but voted reluctantly for the deal, said on Twitter that the signals from the vaccine dispute were a cause for concern.

“Whatever your view on Brexit, it is now completely clear how we’re seen by the EU — we’re out,” he said, and “the good will is sparing.” He called for a policy that “rebuilds relationships.”

Ms. von der Leyen and the Commission were quick to back down, insisting that a mistake had been made and that any vaccine export controls would ensure that the Brexit agreement, which gave assurances that there would be no new border checks between Ireland and Northern Ireland, would be “unaffected.” That protocol essentially treats Northern Ireland as part of the European Union’s regulatory space.

But it was clear that the move to bring in export controls was aimed at preventing any vaccine doses produced within the European Union from being sent into Britain across the open border on the island of Ireland.

The British took it as an aggressive act. Mr. Johnson called Ms. von der Leyen and said afterward that he had “expressed his grave concern about the potential impact.”

The World Health Organization joined in the criticism of the E.U. export controls, saying that such measures risked prolonging the pandemic. Its director-general, Dr. Tedros Adhanom Ghebreyesus, said on Friday that “vaccine nationalism” could lead to a “protracted recovery.” Mariangela Simao, the assistant director-general for access to medicines, on Saturday called the move part of a “very worrying trend.”

After talking to Mr. Martin and Mr. Johnson and getting advice from the European Union ambassador in London, Ms. von der Leyen posted a tweet after midnight saying that “we agreed on the principle that there should not be restrictions on the export of vaccines by companies where they are fulfilling contractual responsibilities.”

The bloc still intends to introduce the export controls, which could prevent any vaccines made in the European Union from being sent abroad, but without involving Northern Ireland, which in any event gets its vaccines from Britain.

Scientists working on the AstraZeneca coronavirus vaccine at the University of Oxford last year.Credit…Andrew Testa for The New York Times

Earlier in the week, the Commission and Ms. von der Leyen had accused the British-Swedish company of not living up to its contract. They suggested that AstraZeneca, which is working with a vaccine developed at the University of Oxford, was giving Britain preferential treatment and even sending some vaccines made in the European Union there instead.

AstraZeneca disputed the charge, and its chief executive officer, Pascal Soriot, insisted that the contract with the European Union required only “best reasonable efforts” to meet delivery schedules.

Britain signed its own contract with the company three months before the European Union did, Mr. Soriot said, and under that contract, vaccines produced in Britain must go there first.

Lawyers disagreed over the language of the E.U. contract, which was only partly made public.

Ms. von der Leyen, who had previously left most of the vaccine dispute to her commissioners, said on Thursday that the bloc would introduce a temporary export-control mechanism to block exports of vaccines made in the European Union — a measure clearly aimed at AstraZeneca, which also manufactures in Belgium.

Approval to even use the AstraZeneca vaccine in the European Union came only on Friday. So the company could hardly be blamed for the existing shortfalls in vaccinations stemming from earlier Commission decisions to order in bulk for the whole bloc, which drove down the price of vaccines but delayed orders and deliveries.

Nor did it help bloc unity when first the German government and then President Emmanuel Macron of France cast doubt on whether the AstraZeneca vaccine was effective for people over age 65 — contradicting what the European Medicines Agency had said when it approved the vaccine for all adults.

For the German magazine Der Spiegel, no fan of Ms. von der Leyen, the mishandling of the vaccine rollout is her responsibility. “Europe is facing a vaccine disaster,” the magazine wrote, which “might ultimately turn out to be the greatest disaster of her entire political career.”

Coffins, some marked with “infection risk” or “corona,” in a crematorium in Meissen, eastern Germany, this month.Credit…Jens Schlueter/Agence France-Presse — Getty Images
Related Topics:AstrazenecaForHadPart