Thousands of people, some throwing fireworks and stones, joined an unauthorized protest against the Dutch government’s coronavirus restrictions in Amsterdam on Sunday, and riot police officers used water cannons, batons, attack dogs and horses to disperse the crowd.

Around a hundred were arrested, according to local media.

The protest came two days after the resignation of Prime Minister Mark Rutte and his cabinet over the way Dutch the tax authority has treated innocent people involved in a child-benefit scandal.

The protesters gathered on a central square lined with landmarks, including the Van Gogh Museum and the American Consulate, and waved placards saying “dictatorship,” “Freedom” and “We are the Netherlands.”

Videos showed that no one was wearing masks — though that is not mandatory in the Netherlands in the open air — and no one maintained social distance, one of the key health measures advised by the Dutch authorities.

Like most of Europe, the Netherlands is in a lockdown, in its case at least until Feb. 9. Infections are high but dropping slightly, with about 34 coronavirus cases per 100.000 inhabitants.

Those protesting against the pandemic restrictions are a relatively small but vocal coterie of groups and individuals, and they have taken aim at Mr. Rutte and his policies as well as at established media organizations. Much like the Trump loyalists who stormed the United States Capitol, they believe the system needs to be uprooted. 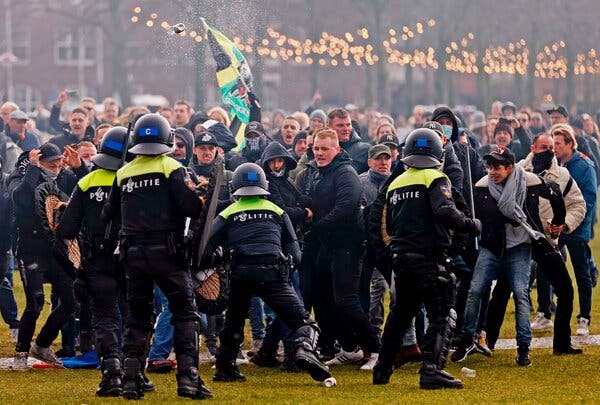 Riot police officers confronted some of the protesters on  the Museumplein square.Credit…Robin Van Lonkhuijsen/Agence France-Presse, via Getty Images

“These people live in their own truth, with their own news and own reality,” said Hans Nijenhuis, editor in chief of The Algemeen Dagblad, the largest-circulation newspaper in the Netherlands. “As we have seen in the States, we can’t just ignore their discontent.”

An application for Sunday’s protest by Michel Reijinga, who gathered supporters on Facebook, was turned down by the authorities, who cited the prohibition of all gatherings to prevent the spread of the coronavirus.

Despite this, thousands gathered at the Museumplein square, prompting the Amsterdam mayor, the police and the Netherlands Public Prosecution Service to send in the riot police.

There have been several protests in the Netherlands during the pandemic against lockdowns and other pandemic measures, but there have also been others in support of the Black Lives Matter movement.

On Sunday, some protesters spoke with frustration about the restrictions.

“We want to party and go to clubs, we are so tired of all these measures,” a younger woman could be heard saying on the livestream of a new Dutch broadcaster, Ongehoord Nederland.

The channel, which describes itself as providing “patriotic angles to the news,” recently achieved the threshold for gaining access to subsidized Dutch public television by having 60.000 people sign up as paid members.

“Traditional media is saying these people are silly and mad, but a demonstration such as this one is a sign of broader dissatisfaction,” said Arnold Karskens, the managing director of the channel.

Mr. Karskens, who has also opposed bans on Black Pete, a controversial Dutch traditional figure in blackface, said:“The truth is people are tired of the coronavirus measures. They feel there is no end in sight.”