Off the field, Travis Kelce’s life is unscripted.

Yes, sometimes it may seem as if the always playful Kelce is reading prepared lines so he can play the role of a goofy frat-party boy — the N.F.L.’s Midwestern version of Rob Gronkowski. But Kelce, the five-time All-Pro tight end for the reigning Super Bowl champion Kansas City Chiefs, insists that is not true.

For example, after last season’s A.F.C. championship game, he stole the postgame show by leaning into a CBS microphone to shout: “You’ve got to fight, for your right … to … parrr-tay!”

It was a line that might have appeared in character, delivered right on cue.

“Nah, it was all instincts,” Kelce said this week.

Then, after the Chiefs won the Super Bowl, there was Kelce making a memorable appearance at the end of a celebratory parade through downtown Kansas City. Kelce, a bit wobbly and with a World Wrestling Entertainment championship belt thrown over his shoulder, blurted to the crowd: “I’m wearing about half the beers I’ve been trying to drink.”

Fun-loving football players carving out a niche in the public consciousness is nothing new. But in Kelce’s case, there is a twist: His cavalier attitude when out of uniform belies a cunning, resourceful and almost scholarly approach to his work on the football field.

The frat boy goes to every class and gets straight A’s. He stays on script. 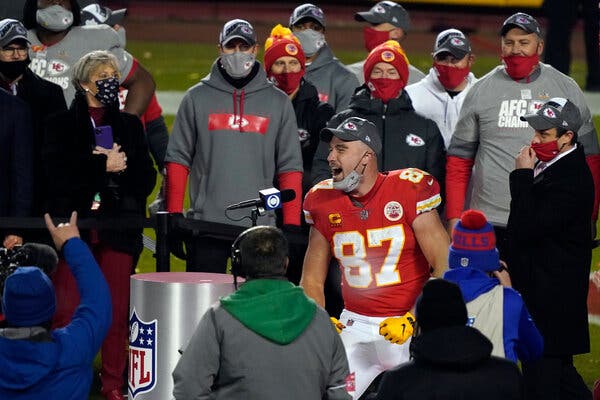 After the A.F.C. championship game last year, Kelce let Chiefs fans know they had to fight for their right to party.Credit…Jeff Roberson/Associated Press

Take it from the modern tight end archetype. “Travis has transformed our position,” said Gronkowski, whose Tampa Bay Buccaneers will meet the Chiefs in the Super Bowl on Sunday. “Crafty, smart guy.”

The defensive coaches who face the Chiefs know as much. They devise illusions in their coverages meant to hoodwink Kelce. Then the opponents line up against him and discover they have been duped.

“He’s sneaky and he’s got a lot of tricks,” Kevin Ross, Tampa Bay’s cornerbacks coach, said. “And he uses them very well.”

The Buccaneers’ defensive coordinator, Todd Bowles, who has been in the N.F.L. for two decades, noted that even when the perfect pass coverage has been called, Kelce immediately sniffs it out and already has prepared an ingenious counterattack.

“You marvel at watching him play, because if there’s a big play to be had, somehow he finds a way to get open,” Bowles said.

He added that while Kelce clearly spends many hours studying opponents, it is more important that he knows what to look for. “He’s savvy,” Bowles said, “probably one of the best I’ve seen.”

The evolution of Kelce’s aptitude as a tight end, a position that calls for both blocking and receiving skills, goes back to his days as a high school quarterback in Cleveland Heights, Ohio.

Kelce, who had yet to fill out his 6-foot-5 frame, chose to attend the University of Cincinnati because it was the rare place that would let him play quarterback and because his older brother, Jason, now a center with the Philadelphia Eagles, was a starter at Cincinnati. Travis remained a quarterback, albeit often one in the wildcat formation, for much of his time at Cincinnati, but tight end was clearly where he belonged, especially as his body matured. By his senior year, that was where he lined up, leading the team in receptions.

Selected by Kansas City in the 2013 N.F.L. draft, Kelce was the fifth tight end taken that year, but the Chiefs coaches soon learned that his time spent in quarterback meeting rooms would be vital.

“It gave me perspective of what’s going on with the quarterback, the head man on the field — the guy who’s got the keys to the car,” Kelce said this week. “It helped me go from just being an athletic guy running routes to being a playmaker accountable on every single play.

“I tell young guys that if you want to be great, you have to be able to play that chess match with the defensive coordinator out there. You can’t be a one-trick pony.”

Kelce’s advanced understanding of how to attack defenses, plus his adaptability, has allowed the Chiefs’ brain trust to move him all over the offensive formation and to run precise, but dicey, timing plays. One example: the underhand toss that Kansas City quarterback Patrick Mahomes threw to Kelce that resulted in a crucial touchdown in the Chiefs’ A.F.C. championship game victory over Buffalo last month.

Mahomes appreciates that Kelce still thinks like the quarterback he once was.

“The quarterbacking in his history definitely gives him that understanding of how to run routes,” Mahomes said. “He’s able to read coverages on the move and knows how to get himself, and others, open. It’s what makes him so special.”

Kelce and Mahomes have enriched their rich kinship off the field as well, going on couples vacations and double dates that include Kelce’s girlfriend, Kayla Nicole, and Mahomes’s fiancée, Brittany Matthews.

This week, however, the two sparred a bit at the Super Bowl media gathering, after Mahomes was asked to chooseanimals that would best represent himself and Kelce. Mahomes said he would like to be a wolf. “Kind of run around with my pack and being able to be a leader,” he said.

For Kelce, Mahomes said the animal would have to be “something funny,” then decided on a giraffe.

“He’s kind of just out there, grazing around the field, trying to make something happen,” Mahomes said.

“He threw me to the wolves,” Kelce said. Then, perhaps recalling that Chiefs wide receiver Tyreek Hill once said that Mahomes talked like Kermit the Frog, Kelce suggested a different animal for his quarterback.

“He’s already got the voice of a frog,” Kelce said.

A little repartee in the frat house.