Don Sutton’s work was done for the night, another Atlanta Braves broadcast complete, one of thousands of games he called over decades in the booth. But Sutton slipped into the visiting clubhouse anyway, not to ask a question but to shake a hand. It was 2018, and a Braves rookie, Mike Soroka, had beaten the Mets at Citi Field for his first victory in the majors. Sutton offered congratulations and wished Soroka many more.

I thought of this a year or so later when I spoke with the Yale baseball coach, John Stuper, about the 1982 World Series. Stuper was a rookie then, for the St. Louis Cardinals, who faced elimination in Game 6 against the Milwaukee Brewers. Sutton was a 17-year veteran still seeking his first championship. Stuper beat him with a complete game, and the Cardinals went on to win Game 7.

“Don Sutton graciously came into our clubhouse after the seventh game and came over to my locker and shook my hand,” Stuper said. “Guys were celebrating all around and he said, ‘This would never have happened without you.’ And that just meant the world to me. He probably doesn’t even remember doing it. But that’s the kind of guy he was.”

Sutton died on Tuesday at 75 years old, the ninth Hall of Famer baseball has lost in the last 10 months. He built his legacy on staggering durability: 5,282⅓ innings and 3,574 strikeouts, both of which place him seventh on the career list; 324 victories; a record 20 seasons of at least 30 starts; and the Dodgers’ franchise marks for wins, losses, innings, shutouts and strikeouts, among others.

Sutton was the Mike Mussina of his era: a slender right-hander with guile and a biting curveball who never had a serious arm injury. Both were remarkably dependable, yet sometimes remembered for what they never did: Neither won a Cy Young Award or threw a no-hitter, and both had just one 20-win season.

Just as Mussina’s Yankees career fit precisely into an era between championships (2002 to 2008), so did Sutton’s first run with the Dodgers, who won titles in 1965 and 1981. Sutton joined the team in 1966, when Sandy Koufax pitched his last game, and stayed through 1980, when Fernando Valenzuela pitched his first.

He returned in 1988 but was released in August, two months before the Dodgers won the World Series again. The next year, Sutton found work in the broadcast booth — he’d started in radio at age 23, working in the winter as a country music disc jockey — and that’s where I found him one summer morning in 1994, before a Braves game in Philadelphia.

We talked for 45 minutes or so, a fascinating conversation I remember vividly. I asked Sutton if it ever gnawed at him to have pitched so long and never quite won it all. He responded with a long, thoughtful answer about the farming life in which he was raised.

Sutton spent the 1980s playing for multiple teams. He won 26 games for the Milwaukee Brewers over three seasons, pitching in the 1982 World Series.Credit…Larry Stoudt/Associated Press
Sutton split the 1985 season between the Oakland Athletics and the California Angels. He won 15 games and kept his streak of 30-start seasons alive.Credit…Getty Images

“Mine is an uncommon attitude, and you can trace it back to the fact that it wasn’t an emotional experience for me, it was a job,” said Sutton, who was born in Clio, Ala., and moved as a child to the Florida panhandle. “I grew up in an atmosphere in the rural South where if we didn’t work, if we weren’t all there, if we didn’t put all our efforts into it and if we didn’t take pride in it, we didn’t eat. It was easy to take that approach to life into baseball.

“It made baseball easy, because I saw my dad working 10, 12 hours a day during all kinds of conditions just to get by. So I could certainly put that same effort into an easy job, which major league baseball was. It was an easy job, made easier because my dad taught me how to work. It wasn’t like for the first time in my life I had to do some work. I just transferred that to baseball.

“So it wasn’t like I thought if we won the world’s championship I was going to become an expert on cars and space travel and this kind of stuff. All I was going to do was be an athlete whose team had a little bit higher record.”

I remembered Sutton mainly for his work in the 1980s, when he wore a kaleidoscope of colors: the orange of the Astros, the baby blue of the Brewers, the green and gold of the A’s, the navy and red of the Angels. That was perhaps more emblematic of Sutton than all those years in Dodger blue.

He was 20 years old in spring training 1966, when Koufax and Don Drysdale staged a holdout, an early tremor in the era just before free agency. Years later, Sutton would famously say, “I’m the most loyal player money can buy,” an honest, realistic motto for players ever since.

“The names and the faces and the uniforms could have been different,” Sutton told me. “But I would have taken the same approach if I had been playing in Leningrad or outer Somalia. I didn’t care. I was a major league pitcher; I was not a Dodger, I was a man playing for the Dodgers. It would be like if you went to somebody and said: ‘Are you a U.S. Steel? Are you a General Motors?’ No, I’m not, I’m a person. And that was my approach to it. It wasn’t always the most popular one, but it worked for me.”

Sutton needed five ballots to be elected to the Hall of Fame, in 1998. Some voters considered him more of a compiler than an all-time great, or penalized him for doctoring baseballs; his nickname, Black & Decker, for the power tools company, did not make it onto his plaque in Cooperstown, N.Y. 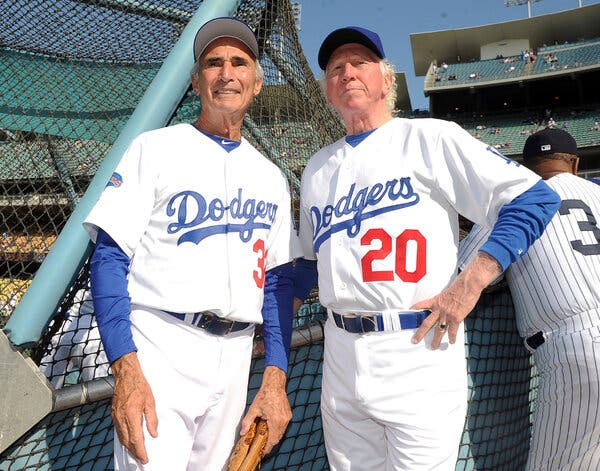 Sandy Koufax, left, pictured at an old-timers’ game in 2013, was still with the Dodgers for Sutton’s first season in Los Angeles. By the time Sutton retired, Orel Hershiser was the team’s ace.Credit…Keith Birmingham/The Orange County Register, via Associated Press

I asked Sutton about his curveball a few years ago for a book I wrote on the history of pitching. He had played one year of Little League as a shortstop, he explained, but switched to pitching in sixth grade because it seemed like more fun. Every day, he said, he’d take his glove to school and play catch with a teacher named Henry Roper, who taught him the curveball. He never took the mound without one.

“The simplest way I was taught was the curveball is a karate chop with a ball in your hand,” Sutton said. “So load up at a 90-degree angle with your upper arm and your lower arm and throw the karate chop, and the ball will come out spinning.”

What a simple, evocative way to explain the pitch, I thought, and I asked him more questions about the curve. I had hoped to move on to the darker arts of the craft — scuffing, sandpaper and the like — but Sutton soon had to leave. He had recently been inducted into the Braves’ Hall of Fame, he said, and was needed at a reception in his honor.

That was a good reason, to be sure, and while I never did ask Sutton about his other pitches, maybe that was just as well. His record was a powerful testament to a lifetime of work, of finding a way to do a job, do it well and do it forever, or something close to that. You wish you could shake his hand, one last time, for a job well done.