WASHINGTON — Lawmakers on Sunday burrowed into dueling positions over the impending impeachment trial of former President Donald J. Trump, deepening the schisms in an already divided Senate a day before the House will deliver its charge to lawmakers there.

Senator Mitt Romney of Utah, the only Republican who voted to convict Mr. Trump in his first impeachment trial, said on Sunday that he believed the former president had committed an impeachable offense, and that the effort to try him even after he left office was constitutional.

“I believe that what is being alleged and what we saw, which is incitement to insurrection, is an impeachable offense,” Mr. Romney said on “State of the Union” on CNN. “If not, what is?”

But even as Mr. Romney signaled his openness to convicting Mr. Trump, other Senate Republicans made clear that they opposed even the idea of a trial and would try to dismiss the charge before it began. Taken together, the comments underscored the rift that the riot at the Capitol on Jan. 6 and the ensuing fallout have created in the Republican conference, as senators weighed whether they would pay a steeper political price for breaking with the former president or for failing to.

Though the House will transmit the article of impeachment on Monday, Senate leaders agreed on Friday to delay the trial for two weeks, giving President Biden time to install his cabinet and Mr. Trump’s team time to prepare a defense. But the plan also guarantees that the trial will dominate Mr. Biden’s crucial first days in office, and it could inflame partisan tensions even as the president is pushing a message of unity.

Some Senate Republicans, including Mitch McConnell of Kentucky, the minority leader, have grown increasingly worried that if they do not intervene to distance themselves from Mr. Trump, their ties to the former president could hurt the party’s political fortunes for years. Others, skirting the question of whether Mr. Trump committed an impeachable offense, have argued that holding a Senate trial for a president who has already left office would be unconstitutional, and would further divide the nation.

Senator Marco Rubio, Republican of Florida, called holding a trial “stupid” and “counterproductive,” likening it to “taking a bunch of gasoline and pouring it on top of the fire.”

“The first chance I get to vote to end this trial,” he said, “I’ll do it because I think it’s really bad for America.”

In an interview on “Fox News Sunday” with Chris Wallace, Mr. Rubio compared the transition of power to that of President Richard M. Nixon. 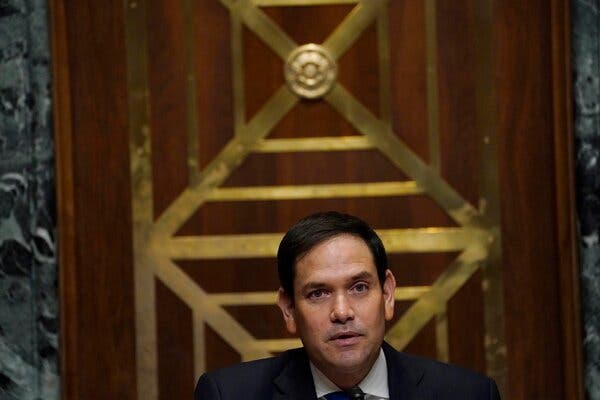 “The first chance I get to vote to end this trial, I’ll do it because I think it’s really bad for America,” Senator Marco Rubio, Republican of Florida, said on “Fox News Sunday.”Credit…for The New York Times

“In hindsight, I think we would all agree that President Ford’s pardon was important for the country to be able to move forward,” Mr. Rubio said, “and history held Richard Nixon quite accountable for what he did as a result.”

Asked if he thought Mr. Trump had committed an impeachable offense, Senator Mike Rounds, Republican of South Dakota, called it “a moot point” and argued that pursuing an impeachment trial against a former president would be both unconstitutional and a waste of time.

“If we start working on an impeachment, which it looks like we’re going to end up doing, we’ve only got a couple of weeks here in which to work actually through and allow this president an opportunity to form a cabinet,” Mr. Rounds said on “Meet the Press” on NBC. “A lot of us would prefer to maybe work through those issues instead.”

Representative Madeleine Dean, Democrat of Pennsylvania and one of the impeachment managers who will try the case against Mr. Trump, said on Sunday that she expected the trial to “go faster” than his trial in 2020, which lasted 21 days.

“Some people would like us to turn the page: ‘Oh, let’s move on,’” Ms. Dean said on “State of the Union.” “We must remember, I believe, that this impeachment trial, I hope conviction, ultimate disqualification, are the very first powerful steps toward unity.”

Ms. Dean declined to say whether impeachment managers would include a New York Times report on Friday that Mr. Trump had considered firing the acting attorney general while in office to wield the Justice Department’s power to try to force state lawmakers in Georgia to overturn its presidential election results. But the impeachment managers have previously signaled that they intend to present a relatively straightforward case, with the siege that played out in public view at the heart of their case.

Mr. Romney, citing both the Capitol riot and an hourlong call Mr. Trump placed to the Georgia secretary of state pressuring him to overturn the election results, said the allegations already in the article of impeachment “themselves are of a sufficient nature that the American people are outraged.”

The delay to the start of the trial also means that lawmakers will continue consideration of another coronavirus stimulus package. A bipartisan group of lawmakers, including Mr. Romney, will meet later on Sunday with Brian Deese, Mr. Biden’s top economic aide, to discuss the administration’s proposed $1.9 trillion bill. Republicans have largely spurned that offer, balking at the cost.

“I’m open to that discussion. I want to hear what the White House has to say,” Mr. Romney said. “But at the same time, I think people recognize it’s important that we don’t borrow hundreds of billions — actually trillions of dollars from the Chinese — for things that may not be absolutely necessary.”