After years of flirting with financial disaster, the Democratic Party entered 2021 not only in control of the White House, the House and the Senate but with more money in the bank than ever before at the start of a political cycle.

The Democratic National Committee will report to the Federal Election Commission on Sunday that it ended 2020 with $38.8 million in the bank and $3 million in debts, according to an advance look at its financial filings. In addition, there is roughly $40 million earmarked for the party, left over from its joint operations with the Biden campaign, according to people familiar with the matter. This gives the Democrats a roughly $75 million war chest at the start of President Biden’s tenure.

“This is a number that is unimaginable,” said Howard Dean, a former party chairman.

The D.N.C. was badly outmatched financially in recent years by the Republican National Committee — by as much as 50 to 1 in terms of cash less than 18 months ago — and the enormous $70 million balance could have significant political consequences for the 2022 midterm elections and beyond. The R.N.C. will also detail its finances entering 2021 on Sunday. It had $58 million in the bank as of late November, with President Trump’s baseless accusations of fraud helping raise tens of millions into its coffers in the days after the election.

Party data, resources and infrastructure undergird candidates up and down the ballot, and Democratic officials are already dreaming of early investments in voter registration that may accelerate the political realignment Democrat are hoping to bring about in key Sun Belt states.

A flush D.N.C. is a far cry from early 2019 when the party could barely pay its bills and even had to take out monthly $1 million loans — four times in five months, at one point — just to cover operational costs. As recently as September of that year, the party’s cash in the bank totaled less than $1 million more than its debts; that same month, the Republican National Committee had more than $53 million in the bank.

“We had to juggle who we were going to pay,” Tom Perez, who until earlier this month was the chairman of the D.N.C., said of the early part of his tenure, which began in 2017.

Now the party has more resources — and possibilities to invest — than ever before.

“We are built to last for years to come,” Mr. Perez said.

Mr. Perez has been succeeded as party chair by Jaime Harrison, who lost his bid last year to unseat Senator Lindsey Graham of South Carolina.

With Mr. Biden occupying the White House, the party also has an institutionalist president who is expected to invest far more than his predecessors in party-building efforts. Former President Barack Obama famously shunned the party apparatus in favor of his own organization, a move widely thought to have harmed the party as Democrats ceded control of state legislative chambers and governorships during his two terms.

Mr. Biden’s choice of Mr. Harrison, a former state party chairman in South Carolina, has buoyed the hopes of some state-level leaders, who often feel forgotten, that they will be better treated in the Biden era. Mr. Harrison has already pledged a “50-state” investment strategy, pushing to embed the party into communities and states that are off the traditional battleground map.

“Organize, organize, organize” is his early mantra. And while money does not ensure success — Mr. Harrison himself lost after breaking fund-raising records with his $132 million Senate run — it tends to make everything easier.

The D.N.C.’s financial picture did not automatically brighten because Democrats won the White House. After Mr. Obama’s 2008 victory, the party entered 2009 with more outstanding loans than cash on hand. And after 2012, the D.N.C.’s financial situation was even worse after it spent heavily on Mr. Obama’s re-election: The party began 2013 with $21 million in debts and less than $5 million in the bank. 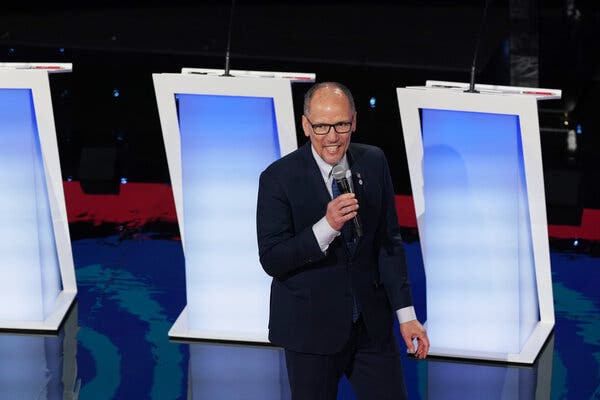 The D.N.C. headquarters that Mr. Perez took over in early 2017 was a bleak place. Donors were dispirited. Staff was demoralized. The party had just been hacked. Donald J. Trump was president. And money was scarce.

“Things were worse than I thought,” Mr. Perez recalled. “We were a wounded brand.”

Hillary Clinton, the 2016 Democratic presidential nominee, had accused the party of severe mismanagement after her defeat, saying her campaign had inherited “nothing”: “I mean, it was bankrupt. It was on the verge of insolvency. Its data was mediocre to poor.”

Michael Blake, who has been a party vice chair since 2017, did not disagree. “Imagine coming into the party and there being no plan to get people elected and trained and win,” he said. “It just wasn’t there. You were building the plane while you were flying it.”

Mr. Perez embarked on a monthslong “apology tour” to mend relationships, especially with wealthy party patrons who were fed up and some of whom had their private communications leaked in the Russian hacking of 2016.

His meetings succeeded in convincing big donors to give that year only 57 percent of the time, according to records he and the party kept. But many of those same donors eventually came around. By 2020, that figure had risen to 90 percent, Mr. Perez said.

The party had nearly 2 million contributors in 2020 and ended the year with $38.8 million across its main account and a second fund called the Democratic Grassroots Victory Fund, which, ironically, exists for big donors. It had about $3 million in debts, mostly for legal services.

It’s not just the cash in the bank that puts the D.N.C. on strong footing. Mr. Perez said the party now has close to 200 staff members — almost double the 110 workers who were on the payroll four years ago — and ongoing revenues are sufficient to maintain that size.

Donna Brazile, who has twice served as acting chair of the party, said she could hardly believe it when she recently learned how much money the party had on hand.

“It’s amazing,” Ms. Brazile said, adding that Democrats had the opportunity to spend moneyin often-forgotten places, like emerging swing states rather than just the current ones.

“The party rarely invests in places where there could be a future race, a future battleground,” she said, singling out Texas and North Carolina as states for more investment after Mr. Biden flipped Arizona and Georgia in November and Democrats won Senate seats in both states. Democrats’ hopes in Texas and North Carolina fizzled in 2020 at the presidential, Senate and House levels.

In a show of confidence, Mr. Biden is keeping some of the same leadership staff at the D.N.C., including Sam Cornale, who is being elevated to the top staff position as executive director. Mary Beth Cahill, a longtime party operative whom Mr. Biden chose as the party’s chief executive in mid-2020, is staying on as a senior adviser as well.

Jennifer O’Malley Dillon, Mr. Biden’s former campaign manager and now a deputy chief of staff, said the president and D.N.C. enjoyed “an historically close partnership” last year that will continue.Mr. Biden “is committed to investing in continued party building and collaboration with the D.N.C.,” she said.

The Republican National Committee will also file its financial disclosures on Sunday as party officials take on the complex task of untangling its finances and operations from Mr. Trump’s. In the aftermath of Mr. Biden’s victory, the R.N.C. raised more than $250 million in tandem with Mr. Trump as he promoted baseless conspiracy theories about widespread voter fraud; the party’s share was 25 percent of the donations in December.

As for Mr. Harrison, he will most likely face immediate and increased demands for financial assistance now that the depth of the party’s resources is public. A senior party official stressed that a significant share of the money is locked into accounts that are restricted to three purposes: legal fights, building needs and conventions, including approximately 90 percent of the $40 million still to be transferred from the joint account with Mr. Biden.

Mr. Dean, who spoke with Mr. Harrison this week, urged him not to heed requests from the top Democrats in Congress, Speaker Nancy Pelosi and Senator Chuck Schumer, the majority leader, when they inevitably ask for money to shore up particular candidates. He said the key was focusing on investments that last beyond individual campaigns.

“That money has to go outside the Beltway,” Mr. Dean said. “Schumer and Pelosi are going to want to keep it inside the Beltway — and the answer is no.”