In the years Myanmar was cowed by a military junta, people would tuck away secret photos of Daw Aung San Suu Kyi, talismans of the heroine of democracy who would save her country from a fearsome army even though she was under house arrest.

But after she and her party won historic elections in 2015 and again last year by a landslide — cementing civilian government and her own popularity within Myanmar — Ms. Aung San Suu Kyi came to be viewed by the outside world as something altogether different: a fallen patron saint who had made a Faustian pact with the generals and no longer deserved her Nobel Peace Prize.

In the end, Ms. Aung San Suu Kyi, 75, she could not protect her people, nor could she placate the generals. On Monday, the military, which had ruled the country for nearly five decades, seized power again in a coup, cutting short the governance of her National League for Democracy after just five years.

Ms. Aung San Suu Kyi was detained in a pre-dawn raid, along with her top ministers and a slew of pro-democracy figures. The rounding up of critics of the military continued into Monday night, and the nation’s telecommunications networks suffered constant interruptions.

Across the country, government billboards still carried her image and that of her party’s fighting peacock. But the army, under commander in chief Senior Gen. Min Aung Hlaing, was back in charge.

The disappearance of Ms. Aung San Suu Kyi, who represented two entirely different archetypes to two different audiences, domestic and foreign, proved her inability to do what so many expected: form a political equipoise with the military with whom she shared power. 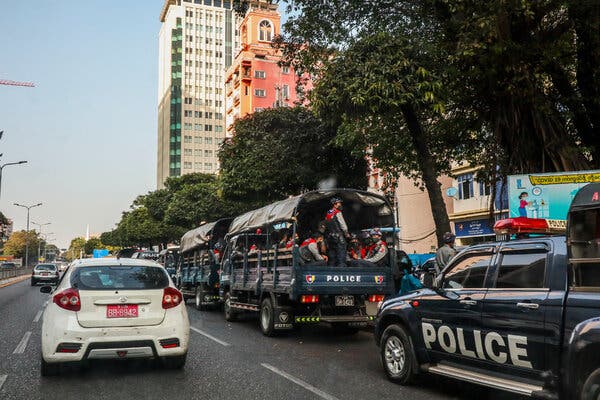 By allowing negotiations with General Min Aung Hlaing to wither, Ms. Aung San Suu Kyi had lost the military’s ear. And by defending the generals in their ethnic cleansing of Rohingya Muslims, she lost the trust of an international community that had championed her for decades.

“Aung San Suu Kyi rebuffed international critics by claiming she was not a human-rights activist but rather a politician. But the sad part is she hasn’t been very good at either,” said Phil Robertson, deputy Asia director for Human Rights Watch. “She failed a great moral test by covering up the military’s atrocities against the Rohingya. But the détente with the military never materialized, and her landslide election victory is now undone by a coup.”

The speed with which Myanmar’s democratic era unraveled was stunning, even for a country that had suffered nearly a half century of direct military rule and had spun with coup rumors for days.

In November, her National League for Democracy drubbed the military’s proxy party, as many voters once again picked Ms. Aung San Suu Kyi’s political force as the best — and only — weapon to contain the generals. Her accommodation of the army over the past five years was viewed by some as political jujitsu, rather than appeasement.

The military, which maintained significant power in the “discipline-flourishing democracy” it designed, complained of mass voter fraud. On Jan. 28, representatives of General Min Aung Hlaing sent Ms. Aung San Suu Kyi a letter ordering a recount and delay in the opening of Parliament, or else.

The military’s seizure of full power on Monday was accompanied by a declaration of a one-year state of emergency, shattering any illusions that Myanmar provided the world an exemplar, however flawed, of democracy on the ascent.

“She is the only person who could stand up to the military,” said U Aung Kyaw, a 73-year-old retired teacher. “We would all have voted for her forever, but today is the saddest day of my life because she is gone again.”

Ms. Aung San Suu Kyi cultivated close relations with the top military brass from the outset, and her National League for Democracy was formed in alliance with senior military officers. After emerging from house arrest in 2010, she dined often with one former member of the junta that had locked her up.

Her supporters said the coziness was more than Buddhist equanimity or political tactics. The daughter of the founder of the modern Myanmar army, Ms. Aung San Suu Kyi has said publicly that she has great affection for the military.

As the military stepped up its 2017 assault on Rohingya Muslims, Ms. Aung San Suu Kyi seemed to display a synchronicity of emotion with the generals that surpassed mere political utility.

United Nations investigators say the slaughter and village burnings, which caused three-quarters of a million members of the Muslim minority to flee to neighboring Bangladesh, were carried out with genocidal intent. But at the International Court of Justice in 2019, Ms. Aung San Suu Kyi, who served as Myanmar’s foreign minister and state counselor, dismissed the violence as an “internal conflict,” in which the army may have used some disproportionate force.

Her tone toward the Rohingya seemed almost contemptuous, and she followed the military’s lead in not mentioning their name, lest it give humanity to their identity.

“Some will be tempted to think she unsuccessfully kowtowed to the military, that she defended genocidaires for political favor and still lost,” said Matthew Smith, founder of Fortify Rights, a human rights watchdog group. “Aung San Suu Kyi didn’t defend the military in court to cater to the balance of power. She defended the military, as well as her own role in the atrocities. She was a part of the problem.”

Even as Ms. Aung San Suu Kyi was excusing the military for its decades of persecution, her relationship with General Min Aung Hlaing was fraying, according to her advisers and retired military officers. Her deepening popularity with Myanmar’s Buddhist majority increasingly came to be seen as a threat by the generals, they say, and she has not spoken to the army chief in at least a year — a dangerous silence in a country where politics are deeply personal.

Normal precedent held that General Min Aung Hlaing, whose family and acolytes have profited from his decade in power, was supposed to give up his position as army chief in 2016. He extended his tenure and vowed to finally retire this summer.

With little communication between the commander in chief and Ms. Aung San Suu Kyi, it grew harder for him to assure an exit in which his patronage network would survive, military and political analysts said. Through his proxies, General Min Aung Hlaing made it known that he might have political ambitions, too. Some even floated his name for president, a position that Ms. Aung San Suu Kyi is constitutionally barred from holding.

With ultimate authority in his hands for at least a year, following the coup on Monday, the army chief has maneuvered back into full relevance, no matter how many voters chose Ms. Aung San Suu Kyi. By Monday evening, the army had announced the outlines of a new cabinet, studded with military officers both active and retired.

The military’s brazen return is a reminder that for all the abuses committed by Myanmar’s clutch of generals during their decades in power — systematic oppression of ethnic minorities, massacres of pro-democracy protesters, the dismantlement of a once promising economy — not a single high-ranking military officer has been fully held to account in the courts.

Barbara Woodward, the United Nations ambassador for Britain, which holds the Security Council presidency for February, said that the Council would meet on Tuesday about the crisis in Myanmar. “We’ll want to have as constructive a discussion as possible and look at a range of measures,” she said, and she would not rule out possible sanctions against the coup instigators.

“We want to move back toward respect for the democratic will of the people,” the ambassador told reporters.

On Monday, as dusk fell on a nation still in shock over the military takeover, the old fears and survival tactics emerged again, unpracticed but still within muscle memory. Individuals took down their National League for Democracy flags. They spoke in code.

“We’re worried the military will cast a progressively wider net in its arrests,” said Mr. Smith of Fortify Rights. “I fear we’re only seeing the first stage right now.”

On Facebook late on Monday afternoon, U Ko Ko Gyi, a former student democracy activist who spent more than 17 years in prison, posted that he had so far evaded the dragnet that had captured fellow senior politicians.

But he took a family photo as a precaution, he wrote. He delivered his goodbyes. His children did not know what was happening.

Downtown Yangon on Monday, where old and fearful habits of self-protection were revived by the coup.Credit…The New York Times
Related Topics:ForHadMyanmarSheWho