Women’s rights advocates and thousands of allies in Poland vowed on Thursday to continue to fight a near-total ban on abortions, calling it a breach of human rights and a sign that the country is regressing.

The constitutional court ruling, which abruptly came into effect late Wednesday, tightened Poland’s already restrictive laws to further ban abortions in cases of fetal abnormalities. It spurred thousands of outraged Poles to take to the streets to express their defiance, despite limits on public gatherings because of the coronavirus pandemic.

When the ruling was first announced in October, it set off a month of protests on a scale not seen since the 1989 collapse of communism.

“This decision is a declaration of war,” Marta Lempart, a protest organizer, said in an phone interview on Thursday. Further protests were planned for each night this week.

It was unclear precisely why the government, after delaying implementation of the court ruling for months in the face of protests, moved suddenly to bring it into legal force on Wednesday. The action could pose political risks for the governing Law and Justice Party judging by polls that have shown an overwhelming majority of people against the ban.

Though doctors performing the procedure will face up to three years in prison, Ms. Lempart said she and other advocates are calling on them to defy the ban.

“Everyone has a choice,” she said. “Will you be an officer of the system, or will you be an honest citizen? We are speaking to every single doctor who will defy this decision: We are with you, and we will help you.”

The new protests come as Poland is partly locked down and struggling through the economic repercussions of a pandemic and a sluggish vaccine rollout. But the threat of the coronavirus is not keeping protesters, most of whom have been masked, off the streets.

“The state and its current authorities have taken the final decision to deprive women of their right to decide about themselves, endanger their lives and, not infrequently, sentence them to torture,” Adam Bodnar, the country’s human rights officer, said in a statement. 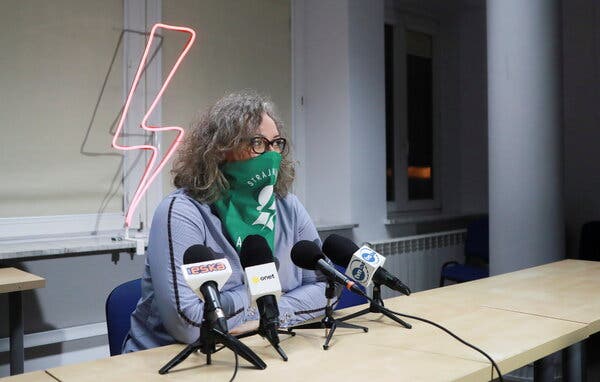 “This decision is a declaration of war,” said Marta Lempart, a protest organizer.Credit…Jacek Marczewski/Agencja Gazeta Via Reuters

The Constitutional Tribunal, the country’s top court, which issued the ruling, said that “human life has value in every phase of its evolution, and as a value, the source of which is in the constitutional laws, it should be protected by lawmakers.”

Far-right lawmakers and supporters of the ban welcomed legal enforcement of the ruling.

Anita Czerwinska, a spokeswoman for the Law and Justice party, described the protests as “a cynical battle against the government.”

Even before the tribunal’s decision, Poland’s abortion laws were among the most restrictive in Europe, allowing for termination of pregnancies only in cases of rape or incest, a threat to a woman’s life and fetal abnormalities. In practice, most legal abortions — 1,074 of 1,100 performed in 2019 — resulted from fetal abnormalities.

The right-wing Law and Justice party tried to implement a total abortion ban in 2016 and 2018, but backed off after mass demonstrations. This time, the government introduced the ban using the tribunal, which it effectively took over in 2016 as part of a judiciary overhaul that has been criticized at home and abroad.

The decision by the tribunal cannot be appealed.

“The only possible action is on the international level, through the European Court of Human Rights and the U.N. committees,” said Mr. Bodnar, the human rights officer. “On the national level, the only way this decision could be reversed is by changing the government.”

The next elections are scheduled in 2023.

The ruling has a very personal dimension for millions of Polish women.

“Women are really scared to get pregnant right now,” said Dominika Sitnicka, a journalist at OKO.press, a news outlet that conducts research and analysis. “Yesterday was not just a symbol of something. It was doomsday.”

As a result of the ban, Polish women will be forced to “travel abroad or have clandestine abortions — for those who can afford it,” said Dunja Mijatović, human rights commissioner for Council of Europe.

Abortion has long been a contentious issue in Poland, a staunchly Roman Catholic country, and the current debate has underlined a societal divide between traditional religious values and more secular ones.

The Polish word for “apostasy,” or the official procedure of leaving the church, has been trending on Google, while the levels of support for the institution among young Poles have reached a historical low.

The government has tried to frame the abortion debate as an attack on the church and therefore an attack on the people, said Edit Zgut, a fellow at the German Marshall of the United States, a move that could further polarize an already divided society.

Many Polish women say they are tired of being used as pawns in the culture wars.

“It actually does not matter why the government decided to publish the ruling right now,” Ms. Lempart said. “I can only guess which corruption scandal they are trying to cover this time. But this is not a strategic move from their side: they are clearly incapable of ruling the country, so they are attacking women.”