MELBOURNE, Australia — Those who celebrate Australia Day, the country’s national holiday, associate it with barbecues and pool parties. But for those who protest against it, it is a reminder of the continent’s brutal colonization.

On Tuesday, tens of thousands of people marched through Australia’s major cities in opposition to the holiday, which they instead refer to as Invasion Day. It is a blunt reframing of the legacy of the arrival of the British 233 years ago, which set in motion centuries of oppression of Indigenous people.

Year upon year, these protests have grown and gained political traction, and Tuesday’s were bolstered by the global Black Lives Matter movement. Here is a look at this contentious day. 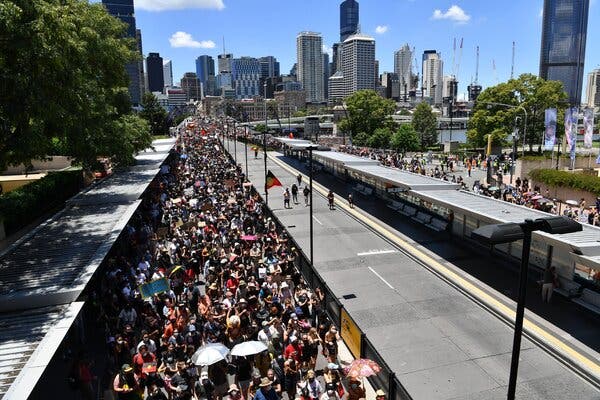 What is Australia Day?

Australia Day, on Jan. 26, marks the date that a British fleet sailed into Sydney Harbor in 1788 to start a penal colony. The mariners raised a flag on land that the British described as “Terra Nullius” (nobody’s land), though Aboriginal people had inhabited the continent for at least 65,000 years.

The public holiday was first formally recognized in 1818, and it has been commemorated nationally since 1994. It takes place during the Southern Hemisphere’s summer, so many Australians spend the day at the beach or with family and friends.

Since the holiday’s beginning, however, Indigenous Australians have been excluded from celebrations. In 1888, when Sir Henry Parkes, the father of the Australian federation, was asked how First Nations people might be involved, he remarked that it would serve only to “remind them that we have robbed them.”

Indigenous performers holding a smoking ceremony in Sydney on Tuesday.Credit…Dean Lewins/EPA, via Shutterstock

What are protesters calling for?

Australians who protest the public holiday argue that it not only excludes Aboriginal and Torres Strait Islander people but also actively celebrates the day their land was taken.

Since 1938, protesters have periodically commemorated the national holiday with a day of mourning. (That same year, several Aboriginal men were forced to participate in a re-enactment of the British landing.)

Two Aboriginal activists, Jack Patten and William Ferguson, wrote at the time: “We, representing the Aborigines, now ask you, the reader of this appeal, to pause in the midst of your sesqui-centenary rejoicings and ask yourself honestly whether your ‘conscience’ is clear in regard to the treatment of the Australian blacks by the Australian whites during the period of 150 years’ history which you celebrate?”

Since then, the demonstrations have involved sit-down protests, rallies and marches on Parliament House in Canberra. Protesters have called for a range of changes, from recognizing Indigenous Australians in the country’s Constitution and creating a treaty between them and the Commonwealth, to reducing high rates of Indigenous incarceration and deaths in custody.

Previously, activists have pushed for changing the date of Australia Day — suggestions have included Jan. 1 (the date Australia was federated), the fourth Friday in January (because it would make for a good long weekend) or May 8 (because the abbreviation M8 sounds like “mate”).

But this year, the messaging shifted more toward abolishing the day altogether.

“There’s a growing awareness and growing solidarity right around the world among Indigenous people everywhere,” said Lidia Thorpe, the first Aboriginal senator elected in the state of Victoria. “There is an uprising.”

Some of the Invasion Day ralliers in Sydney.Credit…Dean Lewins/EPA, via Shutterstock

On Tuesday, thousands of people took to the streets in Sydney, Melbourne, Brisbane, Canberra, Darwin and Perth in protest. They wore Aboriginal flags draped across their shoulders, chanted and held signs reading “Pay the Rent,” “Abolish the Date,” and “No Pride in Genocide.”

Before dawn on Tuesday, the Sydney Opera House lit its sails with the artwork of Frances Belle-Parker, an Indigenous artist, while an Aboriginal flag was raised next to the Australian flag on Sydney Harbour Bridge.

“Solidarity is key,” said Frankie Saliba, an activist, as he marched through downtown Melbourne holding a painted sign that read “Landback,” referring to the movement to return land to its original Indigenous owners.

Another protester, Emily Hart, 11, said she hoped more of her peers would get involved in the protests. “We need to acknowledge this is not our land,” she said.

Though protests were largely peaceful — with masked activists marching in groups of 100 in Melbourne to adhere to social distancing rules — some protesters clashed with the police and were arrested in Sydney after coronavirus regulations were breached, leading organizers to cancel the remainder of the event.

Organizers in Perth and Hobert said the turnout was the largest they had experienced.

Why not change the date?

Support for the Invasion Day movement has been steadily rising, with even mainstream organizations like Cricket Australia removing the name “Australia Day” from their promotional material.

Still, less than a third of Australians say that Australia Day should be moved from Jan. 26, according to a recent poll conducted by Ipsos. Australia’s conservative political leaders have expressed the same view, at times minimizing the abuse of Aboriginal people.

“When those 12 ships turned up in Sydney all those years ago, it wasn’t a particularly flash day for the people on those vessels either,” Scott Morrison, the country’s prime minister, told reporters last week. At a ceremony in Canberra on Tuesday, Mr. Morrison added that Australians had “risen above” their “brutal beginnings.”

Paul Fletcher, Australia’s minister for communications, excoriated the Australian Broadcasting Corporation for including the term “Invasion Day” in an article headline, alongside the holiday’s formal name, pushing the national broadcaster to remove the words.

Marcia Langton, an anthropologist and professor of Indigenous studies at the University of Melbourne, called Mr. Morrison’s comments “cretinous” and an insult to the hundreds of thousands of Indigenous Australians she and others estimate lost their lives in the decades following European settlement.

“The arguments for Australia Day now are clearly morally and intellectually defective,” she said. “It’s not a national day anymore; it’s a day for division.”

The Sydney Opera House lit its sails with the artwork of Frances Belle-Parker, an Indigenous artist.Credit…Dean Lewins/EPA, via Shutterstock