Laying bare a yearlong cascade of failures, a World Health Organization panel recounts in a damning report how governments and public health organizations worldwide responded slowly and ineffectively to the coronavirus, despite years of warnings.

The interim report, an early blueprint for reform, describes the faulty assumptions, ineffective planning and sluggish responses — including missteps by the W.H.O., itself — that helped fuel a pandemic that has killed more than two million people.

“We have failed in our collective capacity to come together in solidarity to create a protective web of human security,” the Independent Panel for Pandemic Preparedness and Response writes.

Many of the failings, such as the inability of governments to obtain protective equipment or do widespread contact tracing, have long been painfully clear over the course of the pandemic. But the report is stark in its assessment that, time and again, those who were responsible for protecting and leading failed to do either.

The panel, led by Helen Clark, a former prime minister of New Zealand, and Ellen Johnson Sirleaf, a former president of Liberia, is still conducting its investigation. But in drafting an interim report, and laying out the scope of its inquiry, the panel makes clear that the world needs to rethink its approach to outbreaks.

The report describes one failure leading to another, from the “slow, cumbersome and indecisive” pandemic alert system, to the years of preparedness plans that failed to deliver, to the disjointed and even obstructive responses of national governments.

Public health officials stumbled, too. Investigators said they could not understand why a World Health Organization committee waited until Jan. 30 to declare an international health emergency. (The Chinese government had lobbied other governments against declaring such an emergency).

And despite the decades of predictions that a viral pandemic was inevitable, and years of committees, task forces and high-level panels aimed at preparing the W.H.O. for that emergency, reforms were slow to come. “The failure to enact fundamental change despite the warnings issued has left the world dangerously exposed, as the Covid-19 pandemic proves,” the report says.

But the W.H.O.’s stumbles did not excuse the repeated failing of world leaders. For even after health officials gave a clear warning signal, the report notes, “In far too many countries, this signal was ignored.”

The report also faults public health leaders for responding slowly to early evidence that people without symptoms could spread the new coronavirus. Early reports out of China, and one in Germany, documented this phenomenon. But leading health agencies, including the World Health Organization, provided contradictory and sometimes misleading advice, a New York Times investigation previously found.

W.H.O.’s director general, Tedros Adhanom Ghebreyesus, appointed the panel to review the world’s Covid-19 response. Although the panel said the report was based on hundreds of documents, expert consultations and more than 100 interviews with frontline responders, it is not clear if the investigators have spoken to key health officials or reviewed internal documents.

Many of the initial findings have been previously identified or been obvious for many months. But the collection of mistakes remains shocking even when it is not surprising, and by spelling them out, the panel hopes to chart a course for change. 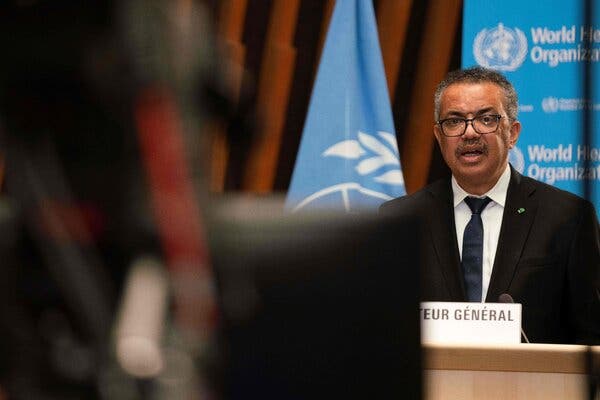 The W.H.O. released the interim report on Monday, a day ahead of schedule, after it was leaked to news organizations. The organization declined to comment before its member governments had reviewed it.

Details in the 34-page report are thin, but it says that China had genome sequencing evidence that a novel virus was circulating in Wuhan in December 2019. Health authorities there could have moved more quickly and decisively to contain the outbreak, the report says, yet country after country repeated many of the same mistakes.

“There were lost opportunities to apply basic public health measures,” the report reads.

Instead of rallying behind proven health responses, governments and their citizens were fractured. Mask-wearing and social distancing became political statements. Conspiracy theories spread wildly. And governments failed to conduct the routine testing and contact-tracing needed to control the disease.

Too often, investigators found, national leaders made health decisions with an eye on keeping their economies afloat, though they did not single out many nations for criticism. That proved to be a false choice. The panel found that countries that responded forcefully and effectively to the outbreak also fared better economically even as the global economy lost more than $7 trillion.

“This is clearly a case where billions can save trillions,” the report says.

That conclusion is an implicit rebuke of countries like the United States, where President Trump demanded the country stay open for business. “We cannot let the cure be worse than the problem itself,” he said in late March, when 30,000 Americans had tested positive.

That figure is now over 23 million, and the country leads the world with nearly 400,000 deaths.

“Health containment measures should have been implemented immediately in any country with a likely case,” the report said. “They were not.”

The Covid-19 pandemic has already forced public health officials to reconsider some of their assumptions. It had long been accepted, for example, that travel bans did more harm than good by delaying medical help and unfairly punishing countries. That thinking has shifted, and the panel declared that travel restrictions have “most likely been helpful in curbing transmission.”

The interim report suggests that its final document will address more systemic challenges facing the World Health Organization, which operates by the consensus of national governments and has no authority to enforce its own rules. The report said there was a wide chasm between what was expected of the organization and how much money it receives.

Mr. Trump withdrew the United States from the organization, taking away its largest source of funding, but President-elect Joseph R. Biden Jr. has said he would rejoin it.

Looking forward, the panel noted that inequality imperiled the world’s vaccine rollout. To demonstrate that disparity, the report includes a chart showing when countries expected to vaccinate their populations.

Rich countries like the United States expect to be nearly finished with their campaigns by the end of the year; poor countries are unlikely to have even vaccinated their vulnerable populations by then. Their vaccine campaigns are expected to continue until the end of 2023.

“Whether you happen to be born in Liberia, or New Zealand, or anywhere else, should not be the factor that determines your place in the vaccine queue,” the report says.