WASHINGTON — In the weeks before taking office, President Biden and his aides spent time digging into books about Franklin D. Roosevelt, both biographies and volumes exploring his iconic first 100 days, on the theory that no president since then has taken office with the country in a crisis quite so grave.

They devised their own opening-days blitz by essentially compressing 100 days into 10. Mr. Biden has now signed about 45 executive orders, memorandums or proclamations enacting or at least initiating major policy shifts on a wide array of issues, including the coronavirus pandemic, racial justice, immigration, climate change and transgender rights.

But if Mr. Biden has gotten off to the fastest start of any president since Roosevelt, the speed bumps ahead threaten to drain his momentum. He heads into a more grinding February featuring contentious legislative negotiations over his $1.9 trillion coronavirus relief package, a molasseslike process to confirm the rest of his senior team and the unwelcome and unpredictable distraction of a Senate impeachment trial of his predecessor.

Even as he assembles a government and seeks to sweep away the vestiges of President Donald J. Trump’s tenure, Mr. Biden finds himself managing the outsize aspirations of the progressive wing of his party while exploring the possibilities of working with a restive opposition that has resisted him from the start. All of which comes as the American death toll from the coronavirus will pass 500,000 within weeks and homeland security officials are warning of more domestic terrorism from extremist Trump supporters like those who stormed the Capitol this month.

“The administration is doing a good job of using executive powers quickly to undo some of the damage of the Trump years and send signals about its own priorities,” said Alasdair S. Roberts, director of the School of Public Policy at the University of Massachusetts Amherst, who has written about Roosevelt’s first 100 days.

The challenge, Mr. Roberts said, is redefining expectations so Americans do not assume that a raft of Roosevelt-style major legislation will follow. “The prospects by that standard aren’t good, and they aren’t improved just because the administration got off to a quick start through executive actions,” he said. “F.D.R. governed in a simpler world.”

The most daunting challenge for Mr. Biden will be balancing his stated desire for bipartisanship with his sense of urgency to get a large pandemic relief package passed quickly. Unlike Roosevelt, who had an overwhelming Democratic Congress, Mr. Biden has the barest of majorities — and party leaders who would rather roll Republicans than compromise with them. Mr. Biden will have to decide how much effort to devote to seeking Republican support at the cost of delaying passage or curtailing its scale.

With enhanced unemployment benefits expiring in mid-March, the White House sees that as a deadline for action. Should the president proceed without bipartisan support, he and his Democratic allies may resort to procedural maneuvers to overcome resistance in the Senate that are likely to enrage Republicans. 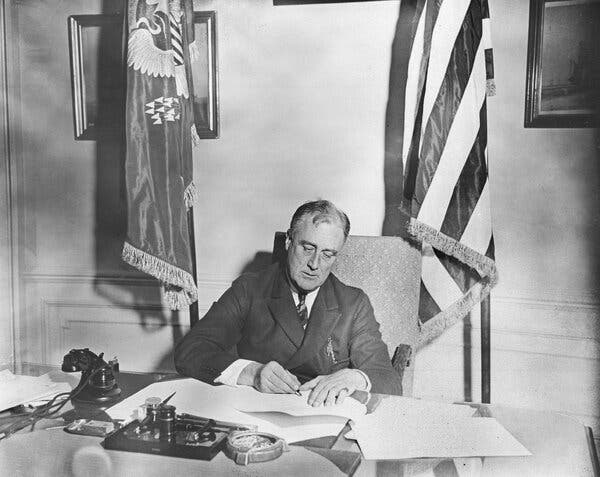 President Franklin D. Roosevelt signing the Emergency Banking Act in 1933. Mr. Roosevelt came to office after three years of economic calamity and responded with a burst of legislation.Credit…Associated Press

In making that decision, Mr. Biden and his team are focused on the experience of another president who took office in perilous times, Barack Obama, for whom Mr. Biden served as vice president. At the depth of the Great Recession, Mr. Obama pushed through a stimulus program 24 days after taking office in 2009 with almost no support from Republicans who showed little interest in Mr. Obama’s ostensibly bipartisan goals.

The lesson Mr. Biden and his advisers have taken from that experience was not that Mr. Obama failed to compromise enough to win over Republicans but that he compromised too much. While Mr. Obama’s economic advisers at the time believed he needed a much bigger program to jump-start the economy, he limited it to $800 billion, figuring it was the most he could get politically. Mr. Biden’s team considers that a mistake, making them more committed to sticking to the $1.9 trillion figure.

“We believe that we can move swiftly,” said Anita Dunn, a senior adviser to Mr. Biden. “He would like to do it with bipartisan support. We believe we should be able to get bipartisan support given the depth of the emergency and the fact that there is a March 15 cliff here because of the unemployment.”

Other White House officials sounded less sanguine on the prospect of bipartisan support for the coronavirus package and noted that there would be other opportunities for across-the-aisle cooperation on issues like infrastructure, the opioid epidemic, rural broadband, mental health and national service.

Aides said Mr. Biden had regularly spoken on the phone with congressional Republicans but because of virus-related restrictions, he had not had them to the White House to signal in a visible way his willingness to consult the other party. And his burst of executive actions drew criticism from Republicans who said such unilateral action hardly represented unity.

Senator Mitch McConnell of Kentucky, the Republican leader, issued a statement headlined, “Biden Says Compromise But Governs Left.” Even Senator Patrick J. Toomey of Pennsylvania, one of the five Republicans who broke with Mr. Trump and voted to proceed with an impeachment trial, complained that Mr. Biden had “started a record-breaking, left-wing executive order binge that has not stopped.”

Lanhee J. Chen, a scholar at Stanford’s Hoover Institution who advised Mitt Romney during his 2012 presidential campaign, said Mr. Biden could not afford to alienate Republicans given his party’s narrow control of Congress. “The danger for Biden is that he squanders whatever good will he may have built with some Republicans over these last several months and leaves himself trying to push through partisan legislation with very little margin for error in the Senate,” he said.

The executive actions came with such a fire-hose intensity that individual moves got lost in the crowd. But White House officials said they chose not to spread them out over a longer period to reinforce a message of energy and change. And while they risked appearing scattershot in their approach by taking on so many issues at once, they reversed many Trump administration policies of concern to different liberal interest groups that are part of his coalition.

Other actions were more symbolic or amounted to intentions to do more down the road. And like Mr. Trump, Mr. Biden quickly ran into trouble in the courts when a federal judge in Texas temporarily blocked his 100-day pause on deportations of immigrants in the country illegally. But liberal leaders expressed support.

“So far, so good,” said Adam Green, a founder of the Progressive Change Campaign Committee, a grass-roots group that supported Senator Elizabeth Warren of Massachusetts over Mr. Biden in the Democratic presidential primaries. But the real measure of Mr. Biden, he added, is still ahead.

“If the first week was a test of whether Biden was willing to go big,” Mr. Green said, “the next couple weeks are a test of the Democratic theory of the fight — do we preemptively negotiate with Republicans and deny what Americans actually need in order that Mitch McConnell and other congressional Republicans feel good? Or do we put really good proposals on the table?”

While Mr. Biden’s talk of unity has yet to actually produce much of it, he has lowered the temperature and has more public support than Mr. Trump had at any point during his presidency. Mr. Biden’s approval ratings in initial polls range from 54 percent (Monmouth University) to 56 percent (Morning Consult) to 63 percent (Hill-HarrisX). Mr. Trump’s rating at a similar point in 2017 was around 46 percent in the Morning Consult poll.

Yet it is not the overwhelming approval that many new presidents had, a reflection of far more divided times. From Dwight D. Eisenhower to George Bush, every newly elected president was in the 60s or 70s for his first six months, according to figures compiled by the polling website FiveThirtyEight. Bill Clinton, however, averaged just 50.5 percent and George W. Bush just 53.9 percent. Mr. Obama had more lift at 60.2 percent, but Mr. Trump averaged 41.4 percent, the lowest of any president in the history of polling.

The question is how long Mr. Biden can hang onto Americans who backed him out of opposition to Mr. Trump, not out of agreement with his ideology, particularly so-called Never Trump Republicans, many of whom still prefer conservative policy prescriptions.

“I’m sure at some point Biden will do something I disagree with, but for now their focus on Covid is important and appropriate,” said Rick Wilson, a longtime Republican operative who helped found the Lincoln Project that worked to defeat Mr. Trump. “He’s running into the hard edge of a Trump-controlled party and I suspect the honeymoon was over for the G.O.P. before it started.”

To get ready to tackle the enormous challenges he was inheriting, Mr. Biden and his team studied books on Roosevelt like Jean Edward Smith’s “FDR” and Jonathan Alter’s “The Defining Moment” as well as other classics like Arthur M. Schlesinger Jr.’s “A Thousand Days” on John F. Kennedy’s abbreviated presidency. Mr. Biden has also consulted regularly with the historian Jon Meacham, who helped write his Inaugural Address.

Roosevelt came to office in 1933 after three years of economic calamity and responded with a burst of legislation that transformed America and the government’s role in society even if it did not fully end the Great Depression. Mr. Biden’s executive actions are less permanent because they can be reversed by future presidents. But they emulate Roosevelt’s desire for determined energy.

“Biden’s executive orders are going to be more enduring than Obama’s and more along the lines of a lot of what Roosevelt did early on,” Mr. Alter said in an interview. If the administration can vaccinate more than 100 million people for the coronavirus in its first 100 days, Mr. Biden will have mobilized a response to the pandemic even faster than Roosevelt’s early New Deal programs responded to the Depression.

“Biden’s mobilization will eclipse that and if he is seen as having gotten control of the virus by the end of his first 100 days, it will set him up for all sorts of other accomplishments,” said Mr. Alter.

But how Mr. Biden times his policy initiatives and whether he can frame them under a memorable Rooseveltian rubric like the New Deal will be critical, he added.

“We still don’t know whether the sequencing and the framing will be up to the challenge,” Mr. Alter said. “The sequencing is how do you build on success so that one success builds on another. And if you don’t roll them out in the right order, you can have a problem.” But Mr. Alter pronounced himself optimistic. “He really does have a fighting chance.”