CHARLOTTESVILLE, Va. — Susan Bro recognized the palpable anger and open bigotry on display in the mob that attacked the United States Capitol this month. It reminded her of the outpouring of hate that killed her daughter, Heather Heyer.

That was in 2017, when white supremacists, self-avowed neo-Nazis and right-wing militias marched on Charlottesville in the name of intolerance — and former President Donald Trump — and one of them drove a car into a crowd, fatally injuring Ms. Heyer. More than three years later, Ms. Bro and other Charlottesville residents say they have a message for the nation after the latest episode of white violence in Washington, and for President Biden, who is emphasizing themes of healing and unity in the face of right-wing extremism.

“Look at the lessons learned from Charlottesville,” she said. “The rush to hug each other and sing ‘Kumbaya’ is not an effective strategy.”

The Capitol attack and Mr. Trump’s handling of it felt eerily familiar to many residents of Charlottesville, where the 2017 Unite the Right rally not only forever tied the former president to violence committed by white extremists, but also inspired Mr. Biden to run for president and undertake “a battle for the soul of this nation.”

After the rally and Ms. Heyer’s death, Mr. Trump declared that there were “very fine people on both sides” of the conflict and defended the actions of the right-wing mob. It was all a harbinger of things to come: the mix of misinformation and prejudice that Mr. Trump had inspired among a segment of Republicans; the reliance on false equivalency with progressive protesters; the willingness to use the bully pulpit of the presidency to inflame tensions; and the continued episodes of violence.

Charlottesville also showed the electoral backlash that Mr. Trump’s actions inspired, and how a movement to affirm multiracial democracy has grown in response to threats. Locally, a surge of activism helped elect the city’s first Black female mayor, Nikuyah Walker, and changes have been instituted like the creation of a civilian review police board.

Mr. Biden regularly invoked Charlottesville during a campaign in which he reclaimed five states that Mr. Trump had won in 2016. And though Mr. Biden nodded to the violence here and at the Capitol during his inaugural address on Wednesday, he framed the solutions in the sort of terms that Ms. Bro questioned, demonstrating a belief that kindness and compassion could overcome systemic discrimination.

“I know speaking of unity can sound to some like a foolish fantasy these days,” Mr. Biden said. “I know the forces that divide us are deep and they are real. But I also know they are not new. Our history has been a constant struggle between the American ideal that we all are created equal, and the harsh, ugly reality that racism, nativism, fear and demonization have long torn us apart.” 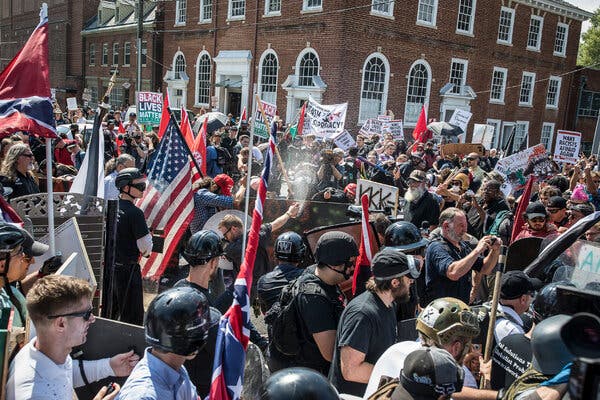 In August 2017, white supremacists violently clashed with counterprotesters in Charlottesville during what is locally called the “Summer of Hate.”Credit…Edu Bayer for The New York Times

Mr. Biden’s tone was echoed by several other inaugural speakers, who delivered a clear and unified message: Democracy was tested in Mr. Trump’s administration, through events like the mob violence in Charlottesville and Washington. They argued that Mr. Biden had been elected to directly confront it — and that he knew the gravity of the challenge.

“We can join forces, stop the shouting, and lower the temperature,” Mr. Biden said. “For without unity, there is no peace — only bitterness and fury.”

But in interviews this week, Charlottesville activists, religious leaders and civil rights groups who endured the events of 2017 urged Mr. Biden and the Democratic Party to go beyond seeing unity as the ultimate political goal and prioritize a sense of justice that uplifts the historically marginalized. When Mr. Biden called Ms. Bro on the day he entered the presidential race in 2019, she pressed him on his policy commitments to correcting racial inequities. She declined to endorse him, she said, focused more on supporting the antiracism movement than any individual candidate.

Local leaders say this is the legacy of the “Summer of Hate,” as the white supremacist actions and violence of 2017 are known in Charlottesville. When the election of Mr. Trump and the violence that followed punctured the myth of a post-racial America, particularly among white liberals, these leaders committed themselves to the long arc of insulating democracy from white supremacy and misinformation.

“We were the canary in the coal mine,” said Jalane Schmidt, an activist and professor who teaches at the University of Virginia and was involved in the 2017 activism. She compared the current political moment to the aftermath of the Civil War, framing the choice for Mr. Biden’s administration as either committing to sweeping change akin to Reconstruction or going along with the type of compromise that brought its end.

“We have a whole major political party that, too large of a section of it, supports undemocratic practices, voter suppression and the coddling of these conspiracy theories,” Dr. Schmidt said, referring to Republicans. “So healing? Unity? You can’t do that with people who don’t adhere to basic democratic principles.”

The Rev. Phil Woodson, the associate pastor at First Methodist United Church, who was among the counterprotesters facing down the mob in 2017, said, “For as much as Charlottesville may have been the impetus for his presidential campaign, Joe Biden hasn’t been to Charlottesville.”

In effect, their words challenge Mr. Biden, Democrats and the country to see this month’s attack at the Capitol not as an isolated riot inspired by a divisive president, but as the latest flash point in a longer civil rights struggle that threatens the nation’s core values. And if the mob violence in Washington was foreshadowed in Charlottesville, they said, then Mr. Biden should take heed of how the community responded.

Ms. Walker’s election was not only a historic first; she is also a progressive who replaced a more centrist mayor. Still, she and the City Council have been pushed by activists seeking to restructure the relationship with the local police department and to give more power to the city’s human rights commission. Ms. Walker did not respond to multiple requests to be interviewed.

At Market Street Park in downtown Charlottesville, where infamous scenes of neo-Nazis carrying tiki torches were broadcast throughout the world, the statue of Robert E. Lee still remains. A memorial for Ms. Heyer was constructed near the street where she died, making for a chilling representation of two American legacies — those who have died in an attempt to help the country live up to its promise of equality, and those who have fought to oppose it.

Sena Magill, the vice mayor of the city, said her husband had almost died in a stroke brought on by the events in 2017. She said that if the city had any lesson to offer America about unity and healing, it was this: Understand the difficulty of that process.

“Three and a half years later, we’re still trying to figure it out,” Ms. Magill said. “But we know that this push cannot just be about being against Trump.”

Mr. Biden’s rhetorical embrace of Charlottesville, meanwhile, has not sat easy with everyone. Several residents said they wished he had visited the city during his presidential campaign.

Ibby Han, who was a student activist at University of Virginia in 2017 and now leads a grass-roots network of progressive campus organizers, said it was “jarring” to see footage of Mr. Biden’s presidential announcement include the actions of her and other counterprotesters.

She compared it to when local leaders hailed a “unity concert” that she felt had been held too soon after the violence.

“Thousands of people showed up for this unity concert, but part of me felt like, ‘Well, if all of those people had also showed up to counterprotest the white supremacists, maybe the outcome would have been a little different?’” Ms. Han said. “When I hear those calls from Biden for unity, I’m thinking again, ‘What are the steps for justice that needs to happen before we can get there?’”

Charlottesville’s struggle also reflects the country’s broader divisions. In Tulsa, Okla., a city that has balanced a desire for racial reconciliation with the painful memory of the 1921 race riot and massacre, Black leaders have talked about a formal, three-step process of racial reconciliation: acknowledgment, apology and atonement. In Minneapolis, where the police killing of George Floyd helped ignite last summer’s racial justice movement, city councilors have wrestled with whether to remove money from the Police Department to support social services at a time of rising gun violence in Black communities.

These local efforts, led largely by Democrats, are an attempt to match the party’s verbal commitment to combat systemic racism with tangible results. In Washington, House Democrats passed the George Floyd Justice in Policing Act last summer, which would remake federal guidelines around police training and misconduct. Mr. Biden has supported the bill, while affirming his administration’s broader commitment to social justice.

“The dream of justice for all will be deferred no longer,” Mr. Biden said in his inauguration speech, warning of a “rise of political extremism, white supremacy, domestic terrorism that we must confront and we will defeat.”

Susan Bro, whose daughter, Heather Heyer, was killed during the 2017 white supremacist violence in Charlottesville, pressed Mr. Biden on his policy commitments to correcting racial inequalities during a phone call on the day he announced his campaign.Credit…Matt Eich for The New York Times

But an open question remains: whether Mr. Biden’s desire for civility is at odds with confronting the threat that white supremacy presents to democracy. Some in Charlottesville believe the two values are opposed, and while broader calls for racial equality have become politically popular, the policies that can bring it about still unsettle some people.

“I don’t think Democrats are really handling this with the amount of urgency that they should,” said Constance Paige Young, an activist who was injured in 2017. “Because I don’t think enough Democrats understand the type of threat to the country that this stuff poses.”

The truth is much bleaker to the activists in Charlottesville. For them, this year’s mob violence took aim at the peaceful transfer of presidential power, but it’s the broader transfer of democratic power — from a largely white America to a rising multicultural coalition — that is testing the nation. Mr. Biden should not pitch unity to those who oppose shared political power, they say, but should unite the country in defeating those who stand in the way.

“I can tell you, I had anger when Heather was killed, but it was channeled into energy,” Ms. Bro said. “On Jan. 6, the anger drained me.”

”I’m afraid what’s going to happen is the same thing that always happens — we talk it to death and no real change,” she said.