WASHINGTON — The acting chief of the Capitol Police called on Thursday for “vast improvements” to security on the Capitol grounds, including permanent fencing and “the availability of ready, backup forces,” setting off a debate over how far to go in hardening the iconic location against continuing threats.

Soon after the statement by the acting chief, Yogananda D. Pittman, Mayor Muriel E. Bowser of Washington issued a statement resisting permanent fencing and extended reliance on a military presence in the wake of the storming of the Capitol on Jan. 6.

Lawmakers in the past have generally resisted turning the Capitol into a heavily secured fortress, wanting it to remain as open as possible to the public. The House and the Senate and other federal agencies have moved to conduct their own studies of the security lapses on Jan. 6 and are likely to have further recommendations.

But the conflicting visions set out by Chief Pittman and Ms. Bowser underscored the tension between making the Capitol as safe as possible and continuing to provide access to a towering symbol of democracy.

Their clash played out on a day when the Capitol Police reported two new arrests around the Capitol grounds, one of a man who allegedly tried to bypass a security checkpoint and another of an armed man with ammunition. The Department of Homeland Security also warned on Wednesday that the United States faced a growing threat from “violent domestic extremists” who might have been emboldened by the Jan. 6 assault.

Still, lawmakers of both parties quickly signaled reluctance to have the Capitol ringed in by a fence.

Representative Jennifer Wexton, Democrat of Virginia, said it would wall off “the symbol of our democracy.”

“A fence didn’t fail us,” she said in a tweet. “Law enforcement leaders did.”

Ms. Bowser said on Twitter that while some upcoming “potentially volatile events” would require extra security, she would not accept fencing and additional troops “as a long-term fixture” in Washington.

“When the time is right, the fencing around the White House and U.S. Capitol, just like the plywood we’ve seen on our businesses for too long, will be taken down,” she said.

Chief Pittman, who took over the department on Jan. 8 after her predecessor resigned, had directed her staff to assess the Capitol complex security upon assuming the post. She noted that experts had argued for greater security measures for the Capitol even before the Sept. 11 attacks. Additionally, a security assessment in 2006 recommended a permanent fence.

“In light of recent events, I can unequivocally say that vast improvements to the physical security infrastructure must be made to include permanent fencing, and the availability of ready, backup forces in close proximity to the Capitol,” she said in a statement.

The District of Columbia is under the jurisdiction of a constellation of law enforcement agencies: the Metropolitan Police Department, the Capitol Police and the U.S. Secret Service, among others. Poor planning and communication among various law enforcement agencies — federal, state and local — contributed to the failures on display.

In the aftermath, the reviews of the failures have been just as disjointed. Speaker Nancy Pelosi ordered retired Lt. Gen. Russel Honoré to lead a review of security at the Capitol Complex. The Capitol Police inspector general also has an additional review, Chief Pittman said, and the acting chief of the Metropolitan Police has offered to Congress an assessment of the Capitol riot from his department and the District of Columbia’s government.

Even while the fence remains on Capitol grounds, new threats have emerged. On Thursday, officers stopped a man trying to gain access at a security checkpoint near the Capitol, according to the Capitol Police.

The officers told the man, later identified by the Metropolitan Police Department as Donald Barr, 51, of Macomb Township, Mich., that he could not enter, but he tried to bypass them. He then “actively resisted arrest,” the Capitol Police said in a statement. He has been charged with felony destruction of property and two counts of assaulting a police officer, among other charges. 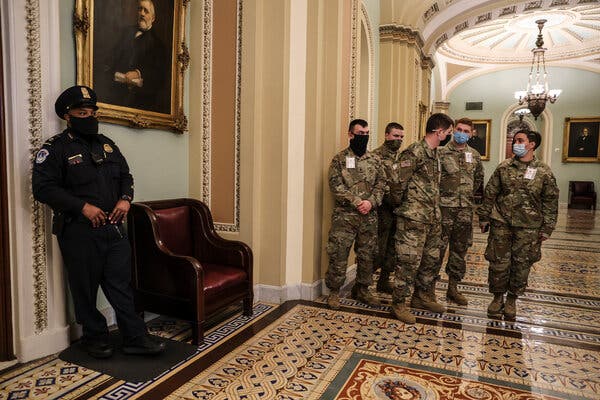 Members of the National Guard at the Capitol on Thursday.Credit…Oliver Contreras for The New York Times

A day earlier, the Capitol Police arrested a 71-year-old man, later identified by the Metropolitan Police Department as Dennis Westover of South Charleston, W.V., for possession of unregistered ammunition, carrying a pistol without a license and unlawful possession of a firearm.

An officer approached him after he exited his car and began walking, asking if he had a gun inside the vehicle, according to a Capitol Police statement on Thursday. Mr. Westover responded that he had a pistol in the center console of his car.

New details about the Capitol rioters that emerged in recent days also suggest that the authorities believe some of those who converged on the building had coordinated and planned an attack. One person who stormed the Capitol, a self-described leader of a militia group, solicited recruits shortly after Election Day for a “basic training class” before the inauguration, federal prosecutors said in an indictment filed Wednesday.

In a 15-page court document, prosecutors brought new allegations against three rioters who they said had connections to militia groups, claiming that they initiated a plan to recruit “as large a following as possible” ahead of Jan. 6.

Jessica Marie Watkins of Champaign County, Ohio, who the F.B.I. says was a member of the far-right Oath Keepers, sent messages to a number of potential recruits for the Ohio State Regular Militia six days after the November election. Donovan Ray Crowl, 50, whom the F.B.I. has identified as a member of the same Ohio militia group, attended a training camp in North Carolina in December.

Ms. Watkins, 38, who described herself on social media as a “C.O.,” or commanding officer, of the Ohio group, told recruits that the group was planning a weeklong “basic training class” in early January. She told one recruit, “I need you fighting fit” by Inauguration Day and told another that the training class was a “military style” exercise run by a Marine drill sergeant, prosecutors said.

Thomas Edward Caldwell, 65, another rioter included in the indictment and an apparent leader of the Oath Keepers, told Ms. Watkins that he believed “we will have to get violent to stop this.”

Chief Judge Beryl A. Howell of the U.S. District Court for the District of Columbia held a hearing on Thursday in the criminal case against Richard Barnett, the Capitol rioter pictured sitting at a desk in Ms. Pelosi’s office with his feet up. In ordering that Mr. Barnett be detained pending his trial, Judge Howell called him, “brazen,” “entitled” and “dangerous.”