WASHINGTON — It was the culminating moment of a transfer of power: President Biden and the first lady, Jill Biden, walked up the driveway to their new home on Wednesday, ascended the steps to the North Portico, waved to the crowd as a military band played “Hail to the Chief,” turned to head inside — and came face-to-face with a closed door.

As the world watched and a small crowd of Biden family members came up behind them, the first couple waited.

Was the president supposed to open the pair of big wooden doors himself? Had former President Donald J. Trump, who had left eight hours earlier, locked him out?

Soon enough the doors were swung open, and the Bidens entered. The awkward moment had lasted only a handful of seconds — about 10, if you time it — but it did not go unnoticed in Washington.

“There was a protocol breach when the front doors were not held open for the first family as they arrived at the North Portico,” said Lea Berman, who served as a White House social secretary for President George W. Bush.

“The delay in opening the door did puzzle me a bit,” said Betty Monkman, who was a White House curator for 30 years and helped supervise changeovers between previous administrations.

The breach turned out to be a small but curious bit of disarray in the chaotic two-and-a-half months between Election Day and Inauguration Day. Nothing was normal in the transition from the Trump to the Biden administration, and turning over the White House to new occupants was no exception.

For one, there was no chief usher to greet the Bidens when they arrived. Although it is unclear exactly what caused the delay with the doors — which are normally opened by Marine guards — the chief usher of the White House, who manages the residence, had been fired less than five hours earlier.

Timothy Harleth, the Trumps’ chief usher and a former rooms manager of the Trump International Hotel in Washington, was busy moving furniture on Inauguration Day when he was told at 11:30 a.m. that his services were no longer needed, people familiar with the process said.

The incoming president’s counsel called the White House counsel on Wednesday, according to a person familiar with the process, and said the Bidens planned to bring in their own person. Mr. Harleth’s departure was first reported by CNN. 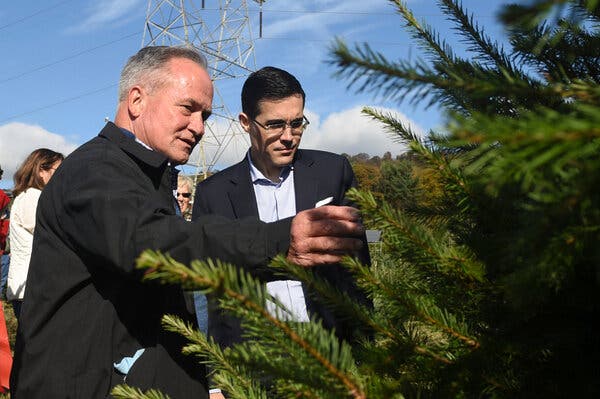 Timothy Harleth, right, the former chief usher at the White House, was formerly an employee of the Trump International Hotel in Washington.Credit…Jacqueline Dormer/Republican-Herald, via Associated Press

Mr. Harleth was chosen by Melania Trump in 2017, when she was first lady. His duties included handling personnel issues and overseeing budgets for the family residence.

“He was selected because of his impressive work history and management skills,” Mrs. Trump said in 2017.

The job has traditionally been nonpolitical, but Mrs. Trump’s decision to hire a Trump Organization employee added partisanship to the role, even though Mr. Harleth tried to frame his work there as one stop in a long career in the hospitality industry. The White House job was well-compensated — former chief ushers say salaries run in the $200,000 range — but the days are long, particularly if the president is an early riser or a night owl; Mr. Trump was both. (Mr. Biden is not a morning person, people familiar with his schedule say.)

Since Election Day, Mr. Harleth had found himself in an untenable position: trying to begin preparations for a new resident in the White House, even as its occupant refused to concede that he would be leaving the premises. Mr. Trump never met with Mr. Biden at the White House, as is tradition. Mrs. Trump also never invited Dr. Biden to take a look at the residence before move-in day.

It is not clear who Dr. Biden will select to replace Mr. Harleth, although there are several deputy chief ushers who are said to still be in their roles.

“It has been an honor to serve as chief usher, a position whose loyalty is not to a specific president, but rather to the institution of the presidency,” Mr. Harleth said in a statement. “I am proud that I had the opportunity to lead the residence staff to receive the incoming first family with the utmost respect and dignity, not just for this administration, but for the future success of the office of the president.”