LONDON — Britain’s disclosure Friday that a new variant of the virus could be deadlier than the original raised a stir about why such alarming information was put out when the evidence was so inconclusive. But there is little debate over its impact: It has silenced those who called for life to go back to normal any time soon.

The British government is expected to announce in coming days that it will prolong and tighten the nationwide lockdown imposed by Prime Minister Boris Johnson this month. Schools may stay closed until Easter, while travelers arriving from overseas could be required to quarantine in hotels for 10 days.

For Mr. Johnson, who has faced unrelenting pressure from members of his own Conservative Party to begin easing restrictions, the warning about the variant was a powerful argument that Britain could be in the middle of a severe new phase of the pandemic — and that relaxing restrictions now could be calamitous.

While scientists agree that the evidence of the variant’s greater lethality is preliminary, inconclusive and based on limited data, they said it nonetheless served the government’s purposes in the debate over lockdowns, in which Mr. Johnson, pulled between science and politics, has often shown an aversion to taking hard steps.

“It’s odd to be making such an announcement, which has serious implications and is clearly concerning for the general public, without having a full data set and a more thorough analysis,” said Lawrence Young, a virologist at Warwick Medical School. “I wonder whether it was about reinforcing the tough message about needing to stick to lockdown and justifying increased border controls.” 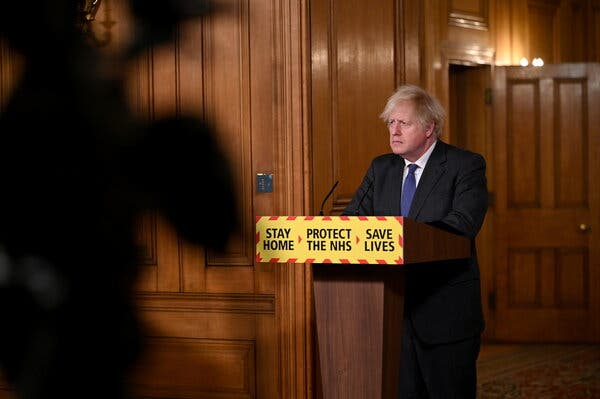 Prime Minister Boris Johnson of Britain confirmed Friday that a new variant of the coronavirus could be not only more transmissible but also deadlier than the original. Credit…Pool photo by Leon Neal

Devi Sridhar, the head of the global public health program at the University of Edinburgh, said, “This preliminary data indicates why lifting restrictions should be done in a cautious and measured way.”

The interests of scientists and government officials have not always been aligned during Britain’s struggle with the pandemic. Tensions have flared when Mr. Johnson has moved to reopen the economy while scientists warned about new infections.

During his briefing at Downing Street on Friday, Mr. Johnson, some noted, had little choice but to confirm concerns that the new variant pummeling Britain was not only more contagious but also may be more lethal. Hours earlier, a prominent epidemiologist, Neil Ferguson of Imperial College London, told a TV journalist, Robert Peston, that a government scientific committee had concluded that it was a “realistic possibility” that the variant could be 30 percent more lethal than the original version of the coronavirus.

The prime minister’s initial announcement that the variant may be associated with higher death rates was short on details, not making clear just how uncertain many experts were about the data. And while government scientists later published a summary of studies outlining the variant’s possible effects, the number of deaths they analyzed was small and uncertainties about the data yielded a broad range of estimates.

“We have not seen the evidence, which in itself is disturbing,” said David King, a former chief scientific adviser to the government who has been critical of how Mr. Johnson has handled the pandemic. “I would simply have welcomed the science emerging together with an account in the form of a preprint.”

Dr. Ferguson himself has become something of a lightning rod during the pandemic. Last March, his models projected that if the virus were allowed to spread uncontrolled, it could cause as many as 510,000 deaths in Britain. Those numbers stunned Mr. Johnson and led him to impose the country’s first lockdown, though he waited a week to act.

The south bank of the Thames early  this month. Britain is undergoing its third lockdown since the start of the pandemic.Credit…Andrew Testa for The New York Times

At the time, some scientists criticized Dr. Ferguson, saying that he was too eager for publicity and that his projections were exaggerated. They accused him of having published inflated death projections during previous epidemics. After he pushed for suppression measures, Britain’s tabloids labeled him “Professor Lockdown.”

Dr. Ferguson later resigned from the government’s Scientific Advisory Group for Emergencies, or SAGE, after admitting he breached lockdown rules by inviting a woman into his home.

But as a member of a key SAGE committee, the New and Emerging Respiratory Virus Threats Advisory Group, which issued a report on the variant’s lethality on Friday evening, Dr. Ferguson has played a leading role in raising an alarm over the new variant. And with Britain’s death toll approaching 100,000, even after multiple lockdowns, his projections no longer look so fantastical.

Government scientists defended the decision to publicize the findings in the interest of transparency. The disclosure reflected fast-changing thinking among infectious disease experts about the potential for mutations to change the path of the virus. Variants discovered earlier in the pandemic received scant public attention.

Still, virologists said they were troubled by the lack of a strong theory for how or why the variant first detected in Britain might be causing more people to die. On top of other concerns about the new data — the low numbers of deaths the findings were based on and how harrowing conditions in hospitals could themselves account for higher death rates — the uncertainty about why it might be more dangerous was reason to wait for more data, they said.

A doctor speaking Sunday with a patient in a car in West London. Health services are under increasing pressure.Credit…Adrian Dennis/Agence France-Presse — Getty Images

“You can see a mechanism whereby the transmission rate would be a bit higher,” said Ian Jones, professor of virology at the University of Reading. “But why that should lead to a higher death rate is not so easy to see.”

Mutations in the new variant allow it to latch more easily onto human cells, making it even more contagious. Virologists said that same property could, in theory, allow it to infect more cells than older variants would have, creating a wider infection that in turn could provoke a more aggressive, and potentially more dangerous, immune response.

But without any lab data to suggest that might be happening, scientists said it was far too early to make sense of the models suggesting higher death rates.

Even the most reputable methods of studying the effects of the variant produced a wide range of estimates of additional risk, ranging from its having virtually no impact on death rates to its increasing the risk of death by 65 percent.

Still, the fact that so many models evaluated by government scientists suggested higher death rates has alarmed scientists.

“At moment, on balance, I’d say it probably is valid,” said Paul Hunter, a professor of medicine at the University of East Anglia. “I can’t believe all these different groups would have come up with all the same conclusions and made all the same errors about controlling for possible biases. But it’s not beyond the range of possibilities.”

Even so, scientists said that beyond strengthening the government’s argument for not yet relaxing restrictions, the new variant would demand the same range of policy responses that earlier versions of the virus did.

“What more can we do just because we know this is more lethal?” Professor Hunter said. “The answer is probably nothing.”