LONDON — Britain, swamped by a fast-spreading coronavirus variant and desperate to keep other mutations out of the country, tightened its travel restrictions on Wednesday, requiring British citizens arriving from 22 high-risk countries to quarantine in hotels for 10 days at their own expense.

The policy edges Britain closer to the strict hotel quarantines imposed by Australia and several Asian countries. But it falls short of a blanket requirement, drawing criticism that it will not seal off the country from dangerous new variants, even as it cripples the already wounded travel and aviation industries.

“There are still too many people coming in and out of our country every day,” Priti Patel, the home secretary, said in Parliament, announcing the new measures, which are also designed to stop Britons from leaving the country.

“Going on holiday is not an exemption,” Ms. Patel added, noting there were reports of people turning up at St. Pancras Station in London, lugging their skis, to board the Eurostar train on their way to Alpine ski resorts.

For now, the hotel quarantine restrictions will be limited to countries already deemed to be high risk because of the emergence of variants, like South Africa and Brazil, and other South American countries. But Ms. Patel said the government could expand the list to include other countries with a prevalence of new variants of the virus.

Under the new rules, arriving passengers would be taken from the airport to nearby hotels, where they would be required to isolate in their rooms for 10 days at their own expense. With a few exceptions, non-British citizens from these 22 countries are already banned from traveling to Britain. Departing travelers would need to provide a reason for their trip and could be turned away at the airport or train station.

Public health experts said the plan had too many loopholes, especially given London’s status as an international hub. “It won’t be effective because people will just connect in other countries to avoid quarantine,” said Devi Sridhar, head of the global public health program at the University of Edinburgh.

The debate over how sweeping to make the policy, and whether to include all those arriving in Britain, divided the cabinet of Prime Minister Boris Johnson. British newspapers reported that Ms. Patel was among those ministers who argued for going further, but was overruled by Mr. Johnson — a divide that was picked up by the opposition parties. 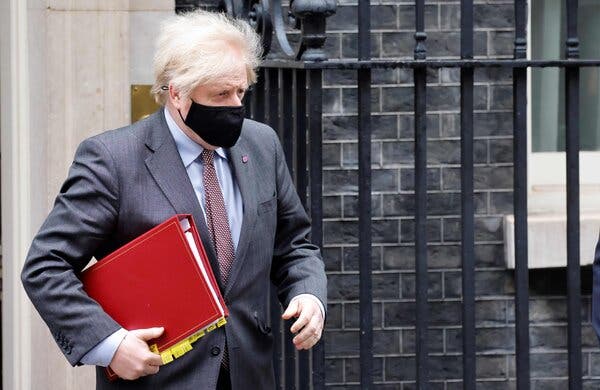 In a tense exchange on Tuesday, Joanna Cherry, a lawmaker from the Scottish National Party, asked Ms. Patel why she had not acted until now, given that she publicly acknowledged that it would have been a good idea to close borders earlier.

“What stopped her?” Ms. Cherry asked. “Was it her cabinet colleagues and if so, why didn’t she resign and speak out given the risk of increased transmission from people entering the country?”

Britain’s new travel policy came on a day when the prime minister offered a tentative road map for emerging from the third national lockdown since the onset of the pandemic last March but made clear there would be no relaxation in February. Mr. Johnson warned that schools would not reopen until March 8 — and then only if Britain controls hospital admissions and achieves its target of vaccinating 15 million of the country’s most vulnerable people by the middle of February.

That message was a disappointment to parents who had hoped schools might reopen after a midterm break in February. And it underscored how dire the situation is in Britain, with more than 37,000 people in hospitals with Covid-19, nearly twice the number of patients as during the first peak of the pandemic last spring.

Opposition leaders accused the government of sending mixed messages — a recurring failure that they said was part of the reason Britain had run up the highest death toll in Europe, with more than 100,000 fatalities. On Wednesday, Britain reported 1,725 additional deaths, making it the second-deadliest day of the pandemic.

“Our schools are closed, and our borders are open,” the Labour Party leader, Keir Starmer, declared to Parliament, speaking on a video link from home where he was self-isolating, “and my biggest concern is that the prime minister still has not learned the lessons of last year. I fear that as a result we will see more tragedy and more grim milestones.”

To help reopen schools, Mr. Starmer called on the government to use the February break to vaccinate teachers and school staff, ahead of other candidates.

Waiting to receive an injection of the Oxford-AstraZeneca Covid-19 vaccine on Tuesday in Brighton, Britain.Credit…Ben Stansall/Agence France-Presse — Getty Images

But the government contends that its priorities for the vaccine are determined by scientific advice, targeting the most vulnerable, many by age. Officials argue that teachers are at no higher risk of dying from coronavirus than people in other occupations. Mr. Johnson challenged Mr. Starmer “to explain which vaccines he would take from which vulnerable groups to make sense of his policy.”

While the quarantine rules were not as sweeping as they could have been, the travel industry expressed alarm about the impact of growing restrictions.

“The U.K. travel and tourism sector is in a fight for survival,” Gloria Guevara Manzo, chief executive officer of the World Travel & Tourism Council, an industry organization, said in a statement. “With the sector in such a fragile state, the introduction of hotel quarantines by the U.K. government could force the complete collapse of travel and tourism.”

In a letter to Mr. Johnson, British Airways, Virgin Atlantic, easyJet and other airlines appealed for more government aid and warned that the country’s airlines “cannot survive a second summer season without meaningful revenue, or additional support.”

But Mr. Johnson’s plan for a route out of lockdown suggested there is little hope of fast relaxation of restrictions. Under the timetable announced Wednesday, the government will review the effectiveness of its vaccination campaign, as well as evidence of whether the lockdown has reduced infections and hospital admissions.

“This will be a timetable that is inevitably going to be subject to adjustment,” Mr. Johnson said. Nevertheless, he called it “a road-map which we can take together and use to defeat the virus.”