MEXICO CITY — They had survived for months in a dusty encampment near the Mexican bank of the Rio Grande, relying on donated food and tents, exposed to the elements and the constant threat of crime.

The American border, always in sight, stood as both a beacon and a taunt. The migrants had requested refuge there, but had been sent back by the administration of former President Donald J. Trump and told to wait in Mexico.

So, with President Biden now in the White House, migrants who had wept with joy and relief at his election hoped he would transform immigration policy and improve their chances of getting into the United States.

But only days into Mr. Biden’s term, many of those same migrants have already grown impatient, their optimism souring to disappointment.

“They said, ‘If we win, we’re going to solve this problem.’ But the days are going by and I don’t see anything,” said Joel Fernández Cabrera, 52, a Cuban asylum seeker who has been living off and on in the camp, in the city of Matamoros, for a year while his petition for asylum remains stuck in the American court system. “We’re beginning to disbelieve this administration.”

The impatience is a reflection of the soaring demand for relief among migrants amid an economically crippling pandemic and after four years of efforts by the Trump administration to choke off both legal and illegal immigration to the United States.

It is also an indication of the magnitude of the challenge facing the Biden administration, which has sought to temperthe expectations and pent-up frustration of migrants and their advocates, and avert a flood of migration to the southwest border.

“He’s our only hope,” said Gabriela, 28, a Bolivian asylum seeker who has been stuck in the camp for more than a year. She requested that she be identified by only her first name because she and her three-year-old son were fleeing death threats. 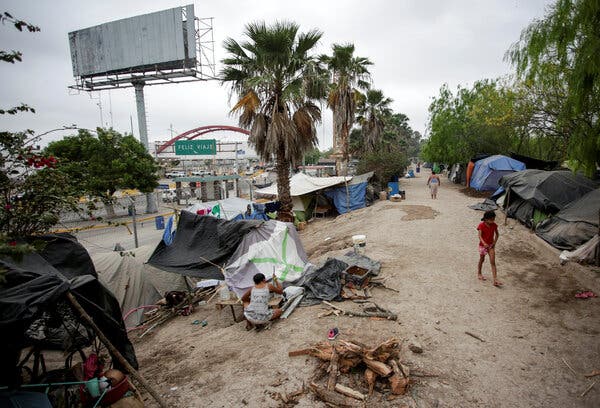 An encampment of more than 2,000 migrants seeking asylum in the United States last year in Matamoros. Many here are relying on donated food and tents, exposed to the elements and the constant threat of crime.Credit…Daniel Becerril/Reuters

Mr. Biden raised expectations in the Matamoros camp and elsewhere by running on pledges to swiftly reverse many of Mr. Trump’s most restrictive migration policies, including ending a program, popularly known as “Remain in Mexico,” that has forced tens of thousands of migrants to wait in the country while their cases are pending in American immigration court.

The new president wasted no time. On his first day in office, he unveiled immigration reform legislation that would create a path to citizenship for an estimated 11 million undocumented immigrants who were in the United States before the start of 2021. This measure, if it passes, would be perhaps the most ambitious immigration redesign since 1986, when President Ronald Reagan signed into law a bill giving legal status to three million immigrants.

Mr. Biden also signed a wave of executive orders that, among other aims, halted construction of the border wall and repealed a ban on travel to the United States from several predominantly Muslim countries.

In addition, he suspended the Remain in Mexico program, though he did not end it or say what would happen to people stuck in Mexico.

But despite the quick action, Mr. Biden and his advisers have been careful about communicating that he wants to avoid moving too fast.

The demand for relief among migrants in the region — some seeking protection from persecution, and many others trying to escape poverty and corruption — is enormous. The pandemic has devastated economies, costing jobs and spurring crime. Two major hurricanes that swept through Central America late last year destroyed homes and inflicted billions of dollars in damage in the region.

With lockdowns easing in recent months, northbound migration from Central America and elsewhere has been accelerating, with many trying to make it to the United States border and some hoping that with Mr. Biden in office, they stand a better chance of getting in.

A migrant camp in Matamoros in 2019.Credit…Eric Gay/Associated Press

An enormous caravan of migrants, numbering as many as 7,000, that set off from San Pedro Sula, Honduras, earlier this month before being broken up by Guatemalan security forces was the most obvious expression of this need and hope. But the uptick is also being felt in smaller ways, including growing numbers of migrants filling shelters along the traditional migratory routes.

“The people aren’t going to be stopped by repression,” said Father Mauro Verzeletti, director of the Casa del Migrante migrant shelter in Guatemala City. “The people are suffering.”

Demand is so high, Mr. Verzeletti said, that the shelter recently rented an annex to handle overflow from the main building.

José Luis Rodríguez Romero, 24, and his wife and three children were among those migrants staying at the shelter this week. Mr. Rodríguez, an agricultural laborer from Honduras, had been without work for a year, in part because of the pandemic.

He said he was hopeful that Mr. Biden would take a more humane approach to the needs of poor migrants in the region.

“We only want to work,” Mr. Rodríguez explained. Mr. Trump, he continued, “was a little bit hard on migrants, supposedly. And now this government will help us. That’s what we hope for.”

The demand for protection has also been reflected in soaring numbers of asylum petitions in Mexico in recent weeks.

Andrés Alfonso Ramírez Silva, general coordinator of the government agency that processes asylum petitions, predicted that the total for 2021 would set records, in part because the delays in jump-starting the American asylum system may mean that many migrants who yearn to make it to the United States will end up applying for protection in Mexico instead.

Immigrants’ advocates in the region have a laundry list of expectations for the Biden administration, among the most urgent of which is ending the Remain in Mexico policy, formally known as the Migrant Protection Protocols.

Migrants seeking asylum in the United States lining up for food at an encampment in Matamoros last year.Credit…Daniel Becerril/Reuters

Advocates also want the Biden administration to cancel a measure that allows border authorities to quickly expel migrants when they cross the border, including those seeking asylum. Trump administration officials had argued this was needed to prevent the spread of the coronavirus in detention centers.

Aides to Mr. Biden have said he eventually intends to abolish some if not all of these rules and will resume processing asylum seekers at ports of entry along the border. But they have cautioned that the process will begin slowly.

Still, migrants and their advocates said they hope that the administration will move quickly to at least allow the re-entry of those Remain in Mexico migrants now stuck in Mexico. Since the policy took effect in January 2019, some of the estimated 60,000 migrants who have been forced to wait in Mexico have been subjected to muggings, kidnap, sexual assault and other crimes.

Some have given up and returned to their home countries, but according to the Transactional Records Access Clearinghouse, a research group at Syracuse University, there are officially still more than 28,000 people left in the program, with many living in migrant shelters, overcrowded rented rooms, cheap hotels and the Matamoros tent camp.

“I hope that this man is going to help us, that he’s going to let us fight for asylum from inside the country,” Yakelyn Azucena Aragón Estrada, 34, a Guatemalan migrant in the Remain in Mexico program who, since 2019, has been waiting with her young son in Tijuana.

“Because here there’s no security, there’s a lot of crime,” she said.

The burden of tamping down expectations has fallen to migrants’ advocates and migration officials in the region, as they also deal with a growing number of northbound migrants.

“The constant message is: Don’t get impatient,” said Enrique Valenzuela, coordinator of the population council in the Mexican state of Chihuahua, which oversees statewide migrant issues. “The population finds itself in an uncertain situation, everyone waiting. But things aren’t going to change from one day to the next.”