The American public has given President Biden favorable reviews since he took office last month, and the policies that he is hurrying to put in place appear broadly popular, according to polls.

And notably, as he signs a wave of executive actions and pushes a major $1.9 trillion coronavirus relief bill, Mr. Biden is facing muted opposition from Republicans so far — a reflection of the party’s weakened position as it juggles two increasingly divided factions.

“I think that Republicans have found Biden to be much more progressive than they thought he was going to be, but I think we’re too busy trying to kill each other to really focus on it,” said Sarah Chamberlain, the president of the Republican Main Street Partnership, a group of centrist Republicans that includes more than 60 members of the House and Senate.

This week, the House’s G.O.P. caucus met to discuss the fate of two lawmakers representing opposite ends of the party’s identity: Representative Marjorie Taylor Greene of Georgia and Representative Liz Cheney of Wyoming, the chamber’s No. 3 Republican. Ms. Greene is one of the chamber’s most fervent loyalists to former President Donald J. Trump, while Ms. Cheney is pushing to unlink the party from his brand of populism.

The result of the meeting on Wednesday was a kind of stalemate, with the Republican leadership allowing Ms. Greene to keep her committee assignments despite a history of offensive and conspiracy-minded statements, and Ms. Cheney comfortably retaining her top position against a mutiny from Trump allies. On Thursday, the entire House voted to strip Ms. Greene of her committee positions over widespread G.O.P. opposition.

This intraparty division gives Mr. Biden the “upper hand” as he pushes his legislative agenda forward, said Doug Schwartz, the director of polling at Quinnipiac University, which released a nationwide poll on Wednesday. “He’s advocating policies that have solid support in the public, so Republicans are in more of a defensive posture, as they’re opposing popular policies,” Mr. Schwartz said. 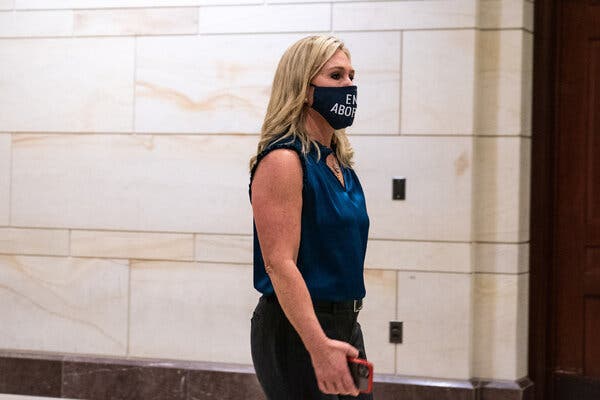 The Republican Party has been split over how to address past inflammatory comments by Representative Marjorie Taylor Greene of Georgia, a Trump loyalist.Credit…Anna Moneymaker for The New York Times

The public’s dissatisfaction with the state of affairs in the United States remains high: Roughly seven in 10 said they were unhappy with the way things were going, according to the Quinnipiac poll. But optimism is on the rise, and many are attaching their hopes to the new president. When asked about the coming four years under Mr. Biden, 61 percent of Americans described themselves as optimistic.

In a Monmouth University poll released last week, 42 percent of Americans said the country was headed in the right direction — considerably less than half, but still more than in any Monmouth poll going back to 2013.

The Quinnipiac survey found that more than two-thirds of Americans supported Mr. Biden’s coronavirus relief package, with wide majorities also backing certain key elements — including a permanent increase to a $15 minimum wage and a round of $1,400 stimulus checks to individuals. On the question of the stimulus payments, even 64 percent of Republicans supported them.

On a range of other Biden policies, the poll found widespread support: rejoining the Paris climate accord, opening a pathway to citizenship for undocumented immigrants and ending Mr. Trump’s ban on travel from some predominantly Muslim countries.

It bears mentioning that pollsters across the country undercounted support for Mr. Trump in November for the second straight time; until survey researchers complete a full post-mortem analysis of 2020 polling, it will be impossible to rule out the possibility that some polls may still be missing a share of his supporters.

Still, “in general, the smart Republicans are trying to pick their battles,” said Robert Cahaly, a Republican pollster in Georgia who has worked with candidates in both the party’s populist wing and its establishment.

Mr. Biden, for his part, will be looking to capitalize on Republicans’ compromised position. “In the end, America wanted a president that was more empathetic, but people do not want a president that looks weak,” Mr. Cahaly said.

But he and other Republican strategists cautioned that if Mr. Biden moved too hastily on legislation that was seen as left-leaning, he could face a backlash from some of the disaffected Republicans who supported him in November. Ms. Chamberlain said that if Mr. Biden’s environmental policies were perceived as harming the economy, he could find himself in a hole. “I think you let them pass laws left and right, and then you expose them for what they are,” Ms. Chamberlain said of her suggested strategy for Republicans.

Americans are not holding their breath for a new dawn of bipartisanship. Just 21 percent of respondents in the Monmouth poll said they were highly confident that Mr. Biden would be able to persuade lawmakers in Washington to work together more. Another 39 percent were somewhat confident.

While Mr. Biden receives favorable job reviews over all, 16 percent of Americans in both the Monmouth and Quinnipiac polls said they hadn’t made up their minds. Many of these people are onetime G.O.P. voters who lost faith in the party under Mr. Trump and are waiting to see how Mr. Biden governs, said the longtime Republican pollster Whit Ayres.

And there is evidence that those who are hanging back are giving him the benefit of the doubt. In an Associated Press/NORC poll released on Thursday, in which respondents were pushed to give an answer, his approval rose to 61 percent. Thirty-eight percent disapproved.

Opinions of the Republican Party, meanwhile, are much darker.

The party’s rank and file is now heavily tilted toward the Trump faithful. “The Trump base is so big as a share of the party because so many of my type of Republicans have left the party,” said Ms. Chamberlain, the head of the centrist group. “But they want to come back to the party.”

These staunch pro-Trump Republicans express deep frustration with their representation in Washington. Most G.O.P. voters continue to think the vote in November was rigged, echoing Mr. Trump’s false claims, and many are irritated that legislators in Washington were not able to keep him in power.

Partly as a result, only 50 percent of Republicans said they were satisfied with G.O.P. lawmakers in Washington, according to the Quinnipiac poll. That’s down from 83 percent among Republican voters nationwide in a Quinnipiac survey a year ago.

“Two people can both look at the same house and dislike it, but for different reasons,” Mr. Cahaly said. “There’s just an element of Republicans that want their old party back and hate the new populism. Then there are Republicans who like the idea of this being a working person’s party and wish the old Republicans would just go be Democrats. This fight is going to take place in primaries, in town halls. This party is in a little bit of a civil war.”