WASHINGTON — Senate Democrats on Thursday maneuvered through a series of politically tricky amendments that Republicans wanted to attach to a virus relief package as lawmakers pressed forward with a budget plan that includes President Biden’s $1.9 trillion economic aid proposal.

In a marathon session — known as a vote-a-rama and for which more than 800 amendments were drafted — that was expected to stretch into the early-morning hours, senators in both parties planned test votes to showcase their dueling priorities. In an evenly split Senate, any amendment required the majority’s support to pass, and therefore several failed on a 50-to-50 tie.

Among the Republican proposals that failed to garner enough support were measures to reduce funding to states like New York under investigation over coronavirus deaths in nursing homes, to prohibit funding for schools that do not reopen for in-person classes once teachers are vaccinated, and to block funds from so-called sanctuary jurisdictions that do not cooperate with federal law enforcement.

Senator Patty Murray, Democrat of Washington and chairwoman of the education committee, called the effort to put restrictions on sending aid to schools “simply a political show.”

“If we withhold funds and schools cannot implement health safety protocols, then we are acting counter to actually getting students back in the classroom,” Ms. Murray said.

Democrats did, however, rally around some amendments from Republicans. The Senate, by unanimous vote, agreed to a motion from Senators Marco Rubio and Rick Scott, both Republicans of Florida, to block tax increases on small businesses during the pandemic. Lawmakers also backed a measure from Senator Roger Wicker, Republican of Mississippi, and Senator Kyrsten Sinema, Democrat of Arizona, to establish a fund to provide grants to food and drinking establishments affected by the coronavirus crisis. And, by a vote of 58 to 42, they agreed to prohibit stimulus money from going to undocumented immigrants — something that is not included in Mr. Biden’s economic rescue plan.

On the Senate floor Wednesday in the lead-up to Thursday’s vote, Senator Brian Schatz, Democrat of Hawaii, dismissed the entire undertaking as a way to “try to set each other up, that we’ll somehow trick someone into taking a bad position that can be turned into a campaign advertisement.”

“Everybody should ignore it if they can. Do anything to not watch vote-a-rama,” Mr. Schatz said. “It is boring and it is the worst part of the United States Senate.”

Among the amendments that passed with bipartisan support — by a vote of 99 to 1 — on Thursday was a measure from Senator Joe Manchin III, Democrat of West Virginia, and Senator Susan Collins, Republican of Maine, to restrict $1,400 direct checks included in Mr. Biden’s plan from going to high earners. Democrats have largely agreed to limit payouts for Americans with higher incomes.

“Do we want stimulus checks to go to households with family incomes of $300,000?” asked Ms. Collins.

“We cannot repeat the mistakes of the past,” said Senator Chuck Schumer, Democrat of New York and the majority leader. “We cannot do too little.”

Before the vote, Senator Mitch McConnell, Republican of Kentucky and the minority leader, had indicated that the amendments were meant to force Democrats into taking a position on some issues they might wish to avoid.

“We’re going to put senators on the record,” he said. “We’ll see how our colleagues vote on these basic, common-sense steps.”

The roughly 12-hour rush of vote-casting came as Speaker Nancy Pelosi signaled that House Democrats were open to dropping a $15 federal minimum wage from Mr. Biden’s plan should the proposal be ruled out of bounds under the Senate’s strict budget process rules. Administration officials and some Senate Democrats were bracing for such a possibility. 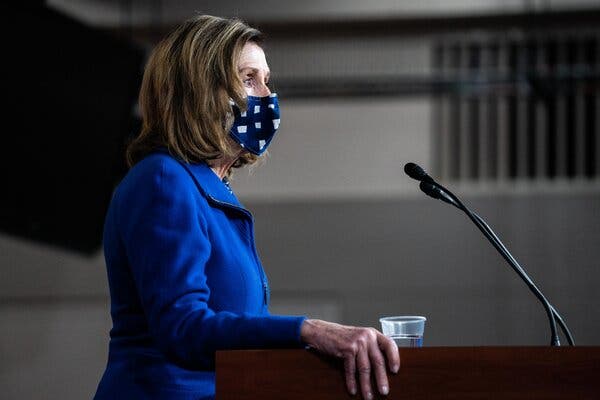 Speaker Nancy Pelosi signaled that House Democrats were open to dropping an increase in the federal minimum wage.Credit…Anna Moneymaker for The New York Times

The speaker said Democrats would not give up on trying to raise the wage to $15 an hour if they were forced to jettison it from the stimulus measure.

“It’s not the last bill we’ll pass,” Ms. Pelosi said. “This is the rescue package.”

During the voting, Ms. Collins, who led a group of 10 senators who met with Mr. Biden this week with hopes of persuading him to embrace a smaller, $618 billion stimulus package, released a letter to the White House that argued that Mr. Biden was overestimating the money needed to reopen schools and help state and local governments.

In an interview, she urged the president to take advantage of money already approved in previous stimulus packages.

“There are hundreds of billions of dollars in unspent funds,” Ms. Collins said.

Democrats were expected to introduce legislation and begin committee debate in the House next week, aiming to move the plan through the budget reconciliation process. They could then circumvent a filibuster, which can only be overcome with 60 votes, and instead pass with a simple majority, allowing the package to be enacted without Republican votes.

While details remain in flux, people familiar with the plan said it would largely mirror Mr. Biden’s $1.9 trillion proposal. The most significant deviation, they said, was likely to be lowering the cost of providing direct payments to Americans.

At Mr. Biden’s insistence, the maximum amount of those payments would remain at $1,400. But Democrats and the administration are discussing phasing them out for higher-income Americans at a faster rate than the $600 payments that Congress approved in December, meaning those earning more would get smaller checks.

Democrats could further reduce the cost of the plan by lowering the income threshold at which the payments begin to phase out. Mr. Biden has proposed beginning the phaseout for individuals earning $75,000 a year and couples earning $150,000 a year. Lawmakers are discussing reducing those thresholds to $50,000 for individuals and $100,000 for couples, though they have not made a final decision on whether to do so.

Among the Republican ideas that appeared to gain some traction with the White House was a proposal from Senator Mitt Romney of Utah, who unveiled a plan to send payments of up to $1,250 per month to families with children, in an effort to encourage Americans to have more children while reducing child poverty rates.

Mr. Romney’s Family Security Act would provide $350 a month for each child up to 5 years old and $250 a month for children ages 6 to 17, via the Social Security Administration. The payments would be capped at $1,250 per family per month, and they would phase out for individual parents earning above $200,000 a year and couples earning more than $400,000.

To offset the costs of the new benefit, Mr. Romney proposed eliminating other government safety net spending, including the Temporary Assistance for Needy Families program and the expanded “head of household” deduction for parents who do not itemize their income tax returns.

The plan drew praise as an example of the possibilities of bipartisan action, with the White House chief of staff, Ron Klain, writing in a tweet that it was an “encouraging sign.”