WASHINGTON — President Biden is using his first full day in office on Thursday to go on the offensive against the coronavirus, promising to make aggressive use of his executive authority to tame and perhaps bring to an end the worst public health crisis in a century.

In a 200-page “National Strategy for the Covid-19 Response and Pandemic Preparedness,” previewed in a 21-page summary on Wednesday evening by Mr. Biden’s advisers, the new administration outlines the kind of centralized federal response that Democrats have long demanded and President Donald J. Trump refused. To carry it out, Mr. Biden will sign a dozen executive orders or actions in an afternoon White House ceremony.

But the Biden plan is in some respects overly optimistic and in others, not as aggressive at it appears. His promise to inject 100 million vaccines in his first hundred days is aiming low, since those 100 days should see twice that number of doses available. Because the currently approved coronavirus vaccines require two doses, Mr. Biden is promising only to vaccinate 50 million Americans.

Beyond that 100-day mark is where the problem lies. Federal health officials and corporate executives agree that it will be impossible to increase the immediate supply of vaccines before April at the earliest because of lack of manufacturing capacity. And no use of federal authority can quickly change that.

Just hours after taking office, the Biden team pointed fingers at their predecessors.

“What we’re inheriting is so much worse than we could have imagined,” said Jeff Zients, the new White House Covid-19 response coordinator, adding, “The cooperation or lack of cooperation from the Trump administration has been an impediment. We don’t have the visibility that we would hope to have into supply and allocations.”

On Capitol Hill, the No. 2 House Republican, Representative Steve Scalise of Louisiana, said Mr. Biden’s promise to get “100 million shots into the arms of the American people” within his first 100 days in office was insufficient.

“Comments made about vaccine supply and distribution by the White House’s coronavirus czar are old Washington spin,” Mr. Scalise said in a statement. “The fact is the Biden administration inherited contracts for 300 million doses of vaccines for two approved vaccines and two in the final stage of clinical trials.”

The release of the national strategy, coming one day after Mr. Biden was inaugurated at a ceremony full of pomp and ritual but robbed by the pandemic of the usual crowds, is an effort by the new president to signal to the public that his approach will be far more assertive on a range of fronts — from ordering federal agencies to invoke the Defense Production Act to boost the manufacture of necessary supplies, to requiring mask-wearing “in airports, on certain modes of public transportation, including many trains, airplanes, maritime vessels, and intercity buses.” according to a fact sheet issued by the Biden administration. 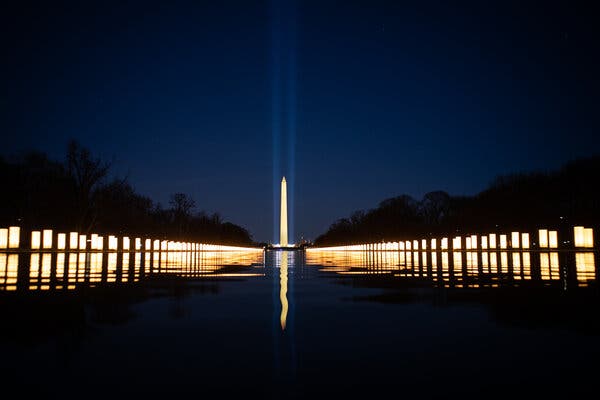 A national Covid memorial in Washington on the eve of the inauguration.Credit…Todd Heisler/The New York Times

With its nominees for top health positions not yet confirmed by Congress, the Biden team said it has asked Mr. Trump’s surgeon general, Dr. Jerome Adams, to stay on as an adviser and to help with the transition. But in a sign of the tensions between the Trump and Biden administrations, Dr. Adams said on Twitter no such offer had been made, and that in fact he was instructed to tender his resignation. He did so on Wednesday, in a Facebook post saying it had been “the honor of my life” to serve in the position.

The Biden team said it had identified 12 “immediate supply shortfalls” that were critical to the pandemic response, including N95 surgical masks and isolation gowns, as well as swabs, reagents and pipettes used in testing — deficiencies that have dogged the nation for nearly a year. Jen Psaki, the new White House press secretary, told reporters on Wednesday evening that Mr. Biden “absolutely remains committed” to invoking the Defense Production Act, a Korean War-era law, to bolster supplies.

Senator Marco Rubio, Republican of Florida, praised Mr. Biden’s plan to invoke the act as a way to reverse “the hollowing out of America’s manufacturing destroyed jobs, families and communities across this country.”

Mr. Biden’s strategy is organized around seven goals, including restoring trust with the American people by conducting “regular expert-led, science-based briefings” and advancing equity “across racial, ethnic and rural/urban lines” — another departure from Mr. Trump’s approach.

“The federal government should be the source of truth for the public to make clear, accessible and scientifically accurate information about Covid-19,” Mr. Zients said, adding that the new administration would be “honest, transparent and straightforward with the American people to rebuild that trust.”

Mr. Biden intends to use his executive authority to create a new office for pandemic response within the White House, while also engaging various federal agencies in a more aggressive effort to combat the novel coronavirus.

The administration is asking Congress for $1.9 trillion for pandemic relief, and White House officials said they will need much of that money to put their Covid-19 plan into place.

“On the asymptomatic screening side, we’re woefully undercapacity, so we need the money in order to really ramp up testing, which is so important to reopening schools and businesses,” Mr. Zients said. “We need the testing. We need the money from Congress to fund the national strategy that the president will lay out.”

To protect the health of workers, he will order the Occupational Safety and Health Administration to “immediately release clear guidance for employers.”

He also intends to direct the departments of Education and Health and Human Services to issue new guidance on how to safely reopen schools — a major point of contention during the Trump administration, whose officials interfered with the school reopening guidance issued by the Centers for Disease Control and Prevention to press administrators to bring students back.

To “address the disproportionate and severe impact of Covid-19 on communities of color and other underserved populations,” Mr. Biden will create a Covid-19 Health Equity Task Force. Another executive order will establish a Pandemic Testing Board, an idea drawn from President Franklin D. Roosevelt’s War Production Board, to ramp up testing and direct studies, including large-scale randomized trials, to identify treatments for Covid-19.

Jean Riordan getting a Covid-19 vaccine on Tuesday from Joseph Goldwater, a registered nurse at a HealthPartners medical campus in Minneapolis.Credit…Octavio Jones for The New York Times

Mr. Zients characterized the goal of getting 100 million vaccine shots into Americans’ arms as “ambitious but achievable,” but demurred when asked if the figure could be boosted to 200 million. The president has already directed the Federal Emergency Management Agency to begin standing up federally supported community vaccination centers, with the goal of having 100 centers in operation within the next month.

Some of Mr. Biden’s actions, though, echo those of Mr. Trump. For instance, Mr. Biden will issue an executive order requiring international travel travelers to produce a negative coronavirus test before departing for the United States — a requirement that is already in place. And he will move to expand eligibility for vaccination to people 65 and older, a step the Trump administration had already taken.

“We will encourage states to begin opening up eligibility to include folks over 65 and frontline essential workers like educators, teachers, first responders and grocery store workers,” said Dr. Bechera Choucair, a former Chicago public health commissioner who is now the Covid vaccine coordinator. “So, more people, more places, more supply.”

In addition to laying out the president’s strategy, Wednesday’s call was a chance for the new administration to introduce the leaders of its Covid-19 response team: Mr. Zients, TimManning, the supply commander; Dr. Choucair, Carole Johnson, the testing coordinator, and Dr. Marcella Nunez-Smith, Mr. Biden’s top adviser on issues of race and health equity, who will lead the new equity task force.

Dr. Nunez-Smith said her task force would issue specific recommendations to the president to erase racial inequities in the Covid-19 response, but said it was too early to know whether recommendations for vaccination would be changed. The current recommendations, drafted by the C.D.C.’s Advisory Committee on Immunization Practices, known as the ACIP, do not explicitly prioritize vaccination for people of color, who have been disproportionately harmed by the pandemic.

But Dr. Nunez-Smith noted that they do prioritize frontline workers, many of whom are people of color. “I think there’s a rationale for why the recommendations don’t explicitly, at least for ACIP and C.D.C., name racial categories,” she said.