WASHINGTON — President-elect Joseph R. Biden Jr. will propose far-reaching legislation on Wednesday to give the 11 million undocumented immigrants living in the United States a chance to become citizens in as little as eight years, part of an ambitious and politically perilous attempt to undo the effects of President Trump’s four-year assault on immigration.

Under the proposal that Mr. Biden will send to Congress on his first day in office, current recipients of Deferred Action for Childhood Arrivals, known as “Dreamers,” and others in temporary programs that were set up to shield some undocumented immigrants from deportation would be allowed to immediately apply for permanent legal residency, according to transition officials who were briefed on Mr. Biden’s plan.

The legislation would also restore and expand programs for refugees and asylum seekers after efforts by Mr. Trump and Stephen Miller, the White House aide who was the architect of the president’s immigration agenda, to effectively prevent entry into the United States for those seeking shelter from poverty, violence and war. Mr. Biden’s bill would provide new funding for foreign aid for Central American countries, increase opportunities for foreigners to work in the United States and enhance security at the border through new technologies instead of through the border wall Mr. Trump tried to build.

Mr. Biden’s proposal is the latest effort in a decades-long attempt to reimagine the nation’s immigration system by presidents from both parties, including George W. Bush and Barack Obama. As the Biden era opens, advocates for immigrants and anti-immigrant restrictionists alike are already bracing for the fight.

Immigration was not the only issue Mr. Biden sought to emphasize on the eve of his inauguration as the nation’s 46th president. In a somber, sundown ceremony at the Lincoln Memorial on Tuesday, Mr. Biden paid tribute to the victims of the pandemic that he has pledged to aggressively tame.

“To heal we must remember,” Mr. Biden said, standing in front of the Reflecting Pool, which was surrounded by 400 lights meant to mark the 400,000 victims of the coronavirus.

At the heart of Mr. Biden’s immigration plan is a proposal to grant temporary legal status for five years to many of the estimated 11 million undocumented immigrants already living in the United States. They would then be eligible for a green card after paying taxes, submitting to a background check and meeting other requirements.

Three years after that, they could apply for citizenship, gaining full status much more quickly than the 13-year path envisioned by bipartisan legislation that failed in 2013.

Senator Chuck Schumer of New York, who will become the majority leader on Wednesday, vowed to quickly take up Mr. Biden’s immigration proposal, calling it “one of the most important things a Democratic Congress can do.” 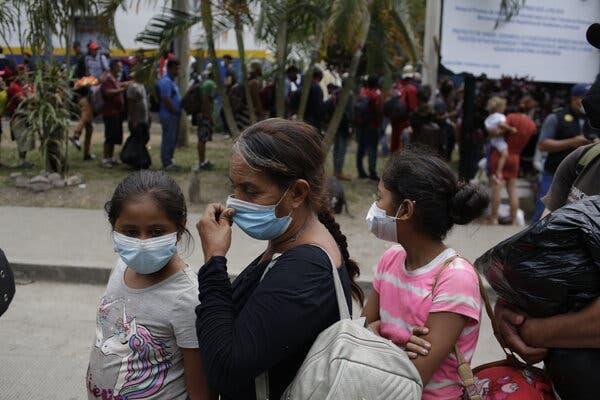 A family from Honduras in El Florido, Guatemala, on Monday stopped before seeking asylum in the United States after a caravan of migrants clashed with the police.Credit…Getty Images

But those who have long pushed for restrictions on immigration are sure to loudly object. Senator Josh Hawley, Republican of Missouri, hinted at his likely intentions on Tuesday by saying he would block the Senate’s swift confirmation of Alejandro Mayorkas, Mr. Biden’s pick to lead the Department of Homeland Security, citing the president-elect’s immigration policies as a reason.

Representative Ken Buck, Republican of Colorado, posted a video on Twitter of a surging mob of migrants, adding: “This is what happens when you announce plans to grant amnesty to millions of illegal immigrants. Joe Biden’s open borders plan has consequences.”

Mr. Miller, in an interview on his last full day in the White House, predicted that Mr. Biden’s immigration proposal will ignite a tremendous political clash in Congress that will backfire on the new president. “A big push for a massive immigration bill in the middle of a pandemic will incite a lot of passion,” Mr. Miller said. “That is the fuel that can lead to a big midterm shellacking.”

As a candidate, Mr. Biden promised that he would not postpone action on immigration as Mr. Obama did in the early days of his administration, only to lose his majority in the House before addressing the issue. Mr. Biden pledged to send a bill to Congress on his first day in office — a pledge he will make good on on Wednesday, officials said.

Immigration activists, who campaigned aggressively for Mr. Biden during the 2020 election, said Tuesday that they had high expectations for the new administration’s plans to reverse Mr. Trump’s legacy and the effort to overhaul the existing immigration system.

“We are truly in the cusp of a new day, and I could not be more thrilled,” said Lorella Praeli, the president of Community Change Action, a group advocating immigration reform. “The new administration and Congress will face a political mandate to deliver on the vision for a more just and free country.”

Ms. Praeli, a onetime undocumented immigrant from Peru who became a citizen in 2015, said that “11 million of us live and work every day.”

“We raise families in communities without any protection from deportation and family separation, vulnerable to exploitation and abuse in the workplace,” she added. “So it is long past time for real change.”

Ms. Praeli and other activists said they would demand that Mr. Biden reject attempts to water down his immigration proposals as he pushes the legislation through Congress.

“We need a clear and unapologetic intervention in the direction the country is going,” said Greisa Martinez, an undocumented immigrant who is the executive director of United We Dream, a group that has pushed to protect the Dreamers from deportation. “The time is done for compromises. The time is now for bold change. Our movement and our power are undeniable. Our demands are undeniable. We are ready.”

As described by transition officials, Mr. Biden’s legislation would profoundly reshape the American immigration system, making it more generous to current immigrants and people from other parts of the world while rejecting the anti-immigrant rhetoric that Mr. Trump sounded from the moment he became a presidential candidate in 2015.

And it will kick off a contentious new debate about how the United States should treat outsiders, an issue that has been at the center of the breach between the two parties for decades. While Democrats narrowly control both chambers of Congress, Mr. Biden will need bipartisan cooperation, especially in the Senate, where most legislation requires 60 votes. Because Democrats hold just 50 seats in the chamber, the new president will need 10 Republicans to support his efforts in order to pass it into law.

Mr. Obama successfully persuaded 68 senators, including 14 Republicans, to support a comprehensive immigration bill in 2013, only to have the effort die in the Republican-controlled House. Now, with Democrats in charge of the House, the challenge for Mr. Biden will be in the Senate, where almost all of the Republicans who backed Mr. Obama have left.

The border wall between Arizona and Mexico. President-elect Joseph R. Biden Jr.’s bill would inject new money into foreign aid for Central American countries, increase opportunities for foreigners to work in the United States and enhance security at the border with new technologies instead of construction of a wall.Credit…Adriana Zehbrauskas for The New York Times

They include former Senators Lamar Alexander and Bob Corker of Tennessee, Jeff Flake and John McCain of Arizona, Kelly Ayotte of New Hampshire, Jeffrey Chiesa of New Jersey, Orrin Hatch of Utah, Dean Heller of Nevada and Mark Kirk of Illinois. Some of them were replaced with more conservative senators who are unlikely to back Mr. Biden’s plan.

Senator Marco Rubio, Republican of Florida, who voted for Mr. Obama’s plan, on Tuesday flatly rejected Mr. Biden’s, calling it a “nonstarter” and saying that “there are many issues I think we can work cooperatively with President-elect Biden, but a blanket amnesty for people who are here unlawfully isn’t going to be one of them.”

In his four years in office, Mr. Trump transformed much of the Republican Party in his image, no more than on immigration. His core voters now put the issue at the top of their concerns, and many echo the president’s harsh and overstated messaging about the dangers from immigrants to their lives and livelihoods.

In Tuesday’s interview, Mr. Miller, who more than anyone else was responsible for Mr. Trump’s anti-immigrant sentiment and policies, said many of the changes they put in place would withstand Mr. Biden’s efforts to reverse them.

But Mr. Biden is betting on his longstanding relationships in the Senate and a backlash against some of Mr. Trump’s more extreme immigration measures, including separating migrant families at the border and forcing asylum seekers to wait in slumlike facilities in Mexico while their applications for entry are processed.

The president-elect is also counting on support from religious and business groups who have long backed a more robust system of immigration. Catholic organizations argue that the country is morally obliged to be more generous to those seeking refuge, while groups like the U.S. Chamber of Commerce say the country needs immigrants to remain competitive.

“I’m very optimistic President Biden has an opportunity to facilitate passage of an immigration bill that would provide the stability and predictability the business community has been yearning for,” said Tom Collamore, a former top official at the chamber. “This is key to stimulating investment of capital that has been sitting on the sidelines, and which would lead to new jobs and economic growth.”

Todd Schulte, the president of FWD.us, an immigrant rights group created by Facebook’s Mark Zuckerberg and others with ties to Silicon Valley, said he too was “deeply encouraged” to see Mr. Biden make a pathway to citizenship a “clear priority on Day 1.”

Polls, he said, show that 75 percent of Americans support that goal. But he warned that winning passage of the legislation would be difficult because this was the same country “where a faction of the Republican Party explicitly embraced overturning an election and we saw a deadly insurrection, fueled by racism and xenophobia.”

Besides a comprehensive immigration overhaul, the new administration may try to pursue other legislative efforts, including a stand-alone Dream Act to protect DACA recipients and legislation that gives essential health care workers a path to citizenship as part of Covid relief efforts.