WASHINGTON — When President Biden swore in a batch of recruits for his new administration in a teleconferenced ceremony late last week, it looked like the country’s biggest Zoom call. In fact, Mr. Biden was installing roughly 1,000 high-level officials in about a quarter of all of the available political appointee jobs in the federal government.

At the same time, a far less visible transition was taking place: the quiet dismissal of holdovers from the Trump administration, who have been asked to clean out their offices immediately, whatever the eventual legal consequences.

If there has been a single defining feature of the first week of the Biden administration, it has been the blistering pace at which the new president has put his mark on what President Donald J. Trump dismissed as the hostile “Deep State” and tried so hard to dismantle.

From the Pentagon, where 20 senior officials were ready to move in days before the Senate confirmed Lloyd J. Austin III as defense secretary, to the Voice of America, where the Trump-appointed leadership was replaced hours after the inauguration, the Biden team arrived in Washington not only with plans for each department and agency, but the spreadsheets detailing who would carry them out.

A replacement was even in the works for the president’s doctor: Dr. Sean P. Conley, who admitted to providing a rosy, no-big-deal description of Mr. Trump’s Covid-19 symptoms last year, was told to pack his medical kit. While all presidents eventually bring in their own doctor, Mr. Biden wasted no time bringing back a retired Army colonel, Dr. Kevin O’Connor, who was his doctor when he was vice president.

Mr. Biden had named nearly all of his cabinet secretaries and their immediate deputies before he took office last Wednesday, most of them familiar faces from the Obama administration. But the president’s real grasp on the levers of power has come several layers down. 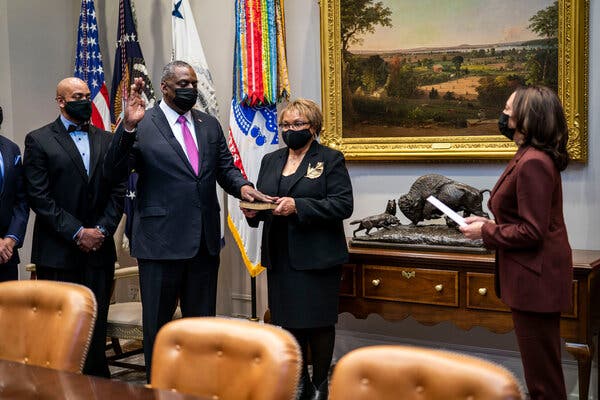 The National Security Council, for example, where American foreign policy comes together, already has staff members in place for jobs that sometimes take months to fill. There is an Asia czar (Kurt M. Campbell, who served in President Barack Obama’s State Department), a China director and directors for other regions. There is a full homeland security staff and a new, expanded White House operation to oversee cyberoffense and defense.

The contrast with the Trump administration at a similar point in time is striking. Mr. Trump had no experience in government — which he made a selling point in his 2016 campaign — and mistrusted those who did. He made it clear that he planned to shrink or starve some agencies, often before determining how to align their missions with the right number of personnel.

Many of Mr. Trump’s appointees — except at the Defense Department and at the Department of Veterans Affairs — arrived with instructions to cut, and it became a point of pride among Trump administration officials to leave jobs open. In the end, Mr. Trump did not shrink the federal work force by much — except in places like the Education Department — but his determination to do so meant that many posts went unfilled for the first two years.

No place was that mission clearer than at the State Department, which Mr. Trump delighted in calling the “Deep State Department.” The first secretary to arrive, Rex W. Tillerson, recalled last year that he spent months examining what he called the “lines of authority” inside the building, and creating strategies to cut the department’s staff by 30 percent — time that might have been spent thinking about ways to develop policy toward China or Russia, or anywhere else. Congress blocked most of the cuts.

Today, the State Department is being run by Foreign Service officers and career officials — the core of the Deep State in the view of Mr. Trump’s allies — who greeted the new secretary of state, Antony J. Blinken, when he arrived for his first full day of work on Wednesday after being confirmed by the Senate. Mr. Blinken grew up inside the department — he joined in 1993 — and served at the end of the Obama administration as its deputy secretary.

So far, there have been few appointments at State: Foreign and Civil Service officers have filled in. But Mr. Blinken plans to make some of those appointments permanent, going back to a previous era when career officials, or retired foreign service officers, take posts that in more recent times have been filled with political appointees.

The Senate confirmed Antony J. Blinken as secretary of state on Tuesday.Credit…Pool photo by Alex Edelman/EPA, via Shutterstock

At the National Security Council, the White House said in a statement, Mr. Biden has “nearly doubled the number of staff ready to start and onboarded than either Trump did in 2017 or Obama in 2009.” The White House offered no specific numbers, but said they reflected “the urgent need to build — in some cases rebuild — capabilities like climate, cyber, global health security and biodefense, and democracy from the ground up.”

The new staff members will have their work cut out for them.

“In making appointments as a new president, Biden has a much tougher job than Trump,” said Michael Beschloss, the presidential historian, who has written about many transitions. “It’s harder to rebuild a government than it is to ransack, demoralize and hollow a government out.”

But there has also been a lot of rooting out.

The tone was set before Mr. Biden was sworn in. On the Saturday evening before the inauguration, Michael Ellis, a Trump loyalist, was installed as general counsel of the National Security Agency on the orders of Mr. Trump’s acting defense secretary. It was a classic case of “burrowing” a political appointee into the bureaucracy in a new, nonpolitical job classification that would make it hard to fire him.

But after Mr. Biden became president, Mr. Ellis was immediately placed on administrative leave while the National Security Agency’s inspector general examined the circumstances of how he was chosen. Now it is unclear if Mr. Ellis will ever serve in the job.

The Trump administration made a similar attempt to burrow officials into the United States Agency for Global Media, which broadcasts around the world, with similar results.

Some officials were fired outright. The Biden team told Victoria Coates, a former Trump national security official who was made the head of the government’s Middle East Broadcasting Networks in the last days of the administration, that it did not care that her contract called for her to serve at least two years and that she could not be removed unless she was convicted of a felony. Her email was cut off at the end of last week in what she called “a shocking repudiation of President Biden’s call for unity and reconciliation.”

In every department, there is already a Biden team on the ground, including those like the hollowed-out Housing and Urban Development, which was run for the past four years by a disengaged secretary, Ben Carson, and a group of ideologically oriented appointees.

The first and most critical pick by the Biden team for the department was Jenn Jones, a top policy adviser to Julián Castro, Mr. Obama’s last HUD secretary.

Ms. Jones was placed in the role of chief of staff — in many way acting as the de facto head of the agency pending the confirmation of Mr. Biden’s nominee, for secretary, Marcia L. Fudge. The policy team has already hired Richard Cho, an executive with a New England coalition that tackles homelessness, and Peggy Bailey, the head of housing for the progressive Center on Budget and Policy Priorities.

At the Department of Health and Human Services, largely ignored by Mr. Trump, at least 18 new political appointees have taken up position, still a fraction of a department that is typically run by over 100.

But one or two well-placed allies can mean a decisive change of direction. One key appointment is Dr. Benjamin Sommers, a Harvard health economist and an alumnus of the department. He took a top role in the agency’s research office, which had been hijacked under Mr. Trump by political appointees who warped reports, web pages and planning documents, rooting out flattering references to the Affordable Care Act and inserting anti-abortion language.

There are departments that were largely ignored by President Donald J. Trump, like the Department of Health and Human Services.Credit…Anna Moneymaker for The New York Times

Then there is the Department of Homeland Security, where the nomination of Mr. Biden’s pick to lead the agency, Alejandro N. Mayorkas, has been stalled by political fallout from the president’s attempts to roll back Mr. Trump’s immigration restrictions.

The Biden administration has swiftly moved political appointees deep into the department’s bureaucracy. In an example of Mr. Biden’s pivot from Mr. Trump’s aggressive immigration measures, Timothy Perry, a former official with the California Governor’s Office of Emergency Services, will replace Kathy Nuebel Kovarik, a former staff member for Senator Charles E. Grassley, as chief of staff of Immigration and Customs Enforcement.

Ashley Tabaddor, a constant critic of the Trump administration as the former head of the union that represents immigration judges, will take over as chief counsel at U.S. Citizenship and Immigration Services, the federal legal immigration agency.

At the Justice Department — where morale was largely decimated and Biden administration officials are eager to begin reversing Trump policies on civil rights, immigration and police oversight — all of the department’s top incoming acting department heads are alumni, some of whom worked under multiple administrations.

The acting deputy attorney general is John P. Carlin, who ran the national security division of the Justice Department during the Obama administration. He is holding the office only until Lisa Monaco, who has worked closely with Mr. Carlin over the years, can be confirmed as deputy attorney general. She served as homeland security adviser under Mr. Obama and, during the Trump years, she and Mr. Carlin ran a group studying the hardest issues in cyberpolicy.

Much as the politicization of the Justice Department angered Mr. Trump’s critics, the neutering of the Environmental Protection Agency prompted outrage from progressives, and it is probably no surprise that the agency is already in the throes of transformation.

About a month before Inauguration Day, a Trump official who ran the water office, Charlotte Bertrand, suddenly emerged as the woman who would take over as acting administrator if the head of the agency resigned. When that moment came, she never had a chance to settle into the chair.

But long before Mr. Regan gets to the building, a cadre of young staff members — a roster that reads like a who’s who of climate change policy wonks, many of them culled from the Obama administration — will be at work.

“It was clear that we were coming off of the most anti-environmental, anti-climate action administration we’ve ever had,” Ms. Sittenfeld said. She added: “The need to act immediately was going to be so vitally important. There was a very intentional, very thoughtful, ambitious effort to get highly skilled experts in place right away.”