WASHINGTON — President Biden, under intense pressure to speed up the pace of coronavirus vaccination, said Tuesday that his administration was nearing a deal with two manufacturers that would enable 300 million Americans to have their shots by the end of the summer.

Supplies to the states will be increasing by 16 percent beginning next week, according to figures provided by Mr. Biden, who promised that his administration would give governors something they had long asked for: certainty over the supply they would receive. He said states would now have three weeks’ advance notice of how many doses they would get.

“Until now we’ve had to guess how much vaccine to expect for the next week, and that’s what the governors had to do: ‘How much am I getting next week?’ ” the president said. “This is unacceptable. Lives are at stake here.”

But while Mr. Biden said the moves were “going to allow millions more Americans to get vaccinated sooner than previously anticipated,” that was likely not the case. Next week’s increase to the states was expected as vaccine makers ramp up manufacturing. And the replenishing over the summer — when the government was likely to run out of supply — was anticipated under contracts signed by the Trump administration, which gave the government options to continue increasing its commitments in increments of 100 million doses.

Even so, experts said the administration was wise to lock down as many doses as it could as soon as possible, even if the vials would only be delivered later in the year. Until now, the federal government had only secured enough doses of federally approved vaccine to cover 200 million of the 260 million adults eligible to be inoculated.

Governors appeared to cautiously welcome the news, which was delivered to them by Jeffrey Zients, Mr. Biden’s coronavirus czar, on a conference call before the president’s announcement.

“Every governor in America faces the same obstacle: The extremely limited supply of vaccines produced and allocated is only a tiny fraction of what our citizens desperately need,” Gov. Larry Hogan of Maryland, a centrist Republican, said in a statement. “We appreciate the administration stating that it will provide states with slightly higher allocations for the next few weeks, but we are going to need much more supply.” 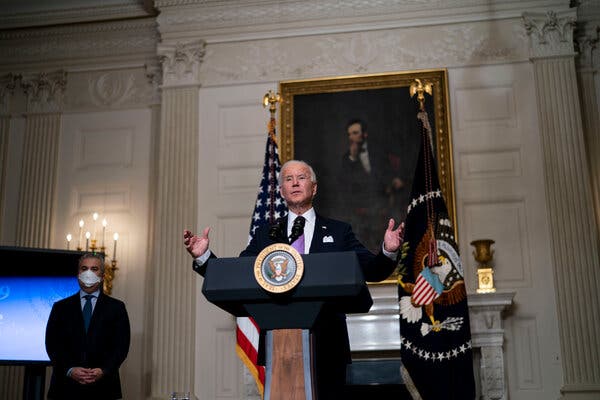 President Biden said Tuesday that the moves would “allow millions more Americans to get vaccinated sooner than previously anticipated,” but next week’s increase to the states was expected.Credit…Doug Mills/The New York Times

Mr. Biden’s announcement came as representatives from the State Department and the Centers for Disease Control and Prevention urged all American citizens thinking about traveling abroad to “seriously reconsider” their plans in light of the new travel regulations that went into effect on Tuesday. Those rules require international travelers to present a negative coronavirus test or proof of recovery before boarding a United States-bound flight.

Ian G. Brownlee, the acting assistant secretary of the State Department’s bureau of consular affairs, said that if U.S. citizens traveled abroad and happened to contract the coronavirus, they should be prepared to deal with the extra lodging and medical costs required with a delayed trip back home.

“All travelers should have a Plan B,” Mr. Brownlee said. “We urge folks to postpone their trips if they’re able.”

Just one week into his administration, Mr. Biden is facing a convergence of crises. The vaccine rollout he inherited from his predecessor has been rocky, leaving Americans angry and frustrated over vaccination appointments canceled for lack of supply. At the same time, new, more infectious variants of the virus are making vaccination all the more urgent.

“We’re not in a race with the variants — the variants have already won,” warned Michael T. Osterholm, the director of the Center for Infectious Disease Research and Policy at the University of Minnesota. “If these variants take off like I think they are very likely to do, by April this surge will have come and possibly gone — and it could be by far the very worst surge of the entire pandemic.”

The president is also well aware that Americans will not give him an extended honeymoon. He tried on Tuesday to blame his predecessor, saying he intended to “launch a full-scale wartime effort to address the supply short shortages we inherited from the previous administration.” But fingers will soon be pointing at him if there is no improvement.

Tuesday’s announcement underscored that reality. In making it, Mr. Biden appeared to roll back a comment that he made on Monday, when he said that he believed that any American who wanted a coronavirus vaccine would be able to get one “this spring.”

Mr. Biden has repeatedly promised that health officials will administer 100 million vaccine doses by his first 100 days in office — a promise that some experts have criticized as not ambitious enough.

The president said Tuesday that he regarded the 100 million number as a floor, not a ceiling: “One hundred million shots in 100 days is not the end point,” he said. “It’s just the start. We’re not stopping there.”

At the same time, Mr. Biden tried to temper expectations. He warned that “a lot can go wrong along the way,” and predicted that things would get worse before they get better.

The purchase of the additional doses would increase the administration’s total vaccine order by 50 percent, raising it from 400 million to 600 million doses — enough to vaccinate 300 million Americans by the “end of the summer, beginning of the fall,” Mr. Biden said.

Until now, the federal government has released 8.6 million doses to states, territories and tribal governments each week, apportioning amounts based on population. That will now jump to around 10 million doses.

The increase is the result of a boost in the supply of the vaccine from Moderna, a biotechnology company based in Massachusetts whose vaccine was authorized for emergency use in December. A federal official familiar with vaccine manufacturing said on Tuesday that it was unlikely the number would increase next week, but would gradually grow to as many as 18 million each week by the end of March — a pace Moderna and Pfizer would have reached regardless of which administration was in power.

The official said Moderna had moved slightly ahead of Pfizer’s production rate, explaining why the company accounted for the coming increase in doses.

While the president has vowed to use the Defense Production Act if necessary to increase vaccine supply — something the previous administration also did — there is little he can do in the short term. Federal health officials and corporate executives agree that it will be very hard to bolster the supply of the Moderna and Pfizer vaccines — the only two that have emergency clearance — before April because of lack of manufacturing capacity.

Another coronavirus vaccine manufacturer, Johnson & Johnson, is expected to unveil the results of its clinical trials by the end of the month, then apply for emergency approval, but is struggling to meet its pledge to deliver as many doses this spring as it promised because of unanticipated manufacturing delays. One official familiar with the company’s situation said that if the Food and Drug Administration authorized the vaccine for emergency use in February, the company may have as few as seven million doses ready for delivery.

A coronavirus testing site in Harrisburg, Pa. Mr. Biden inherited a rocky vaccine rollout from his predecessor as new, more infectious variants of the virus are making vaccination all the more urgent.Credit…Hilary Swift for The New York Times

The company and the F.D.A. are currently in negotiations over how the production can be sped up so the firm could potentially deliver more than 30 million doses by early April.

The Johnson & Johnson vaccine has spurred much interest because it requires only one dose and involves more manageable storage conditions than the vaccines made by Pfizer and Moderna. But the Biden administration is not yet including it in its calculations, because it did not want to rely on “things that are not things we can count on today.”

This latest deal would apparently obligate Pfizer to deliver another 100 million over the summer, or roughly the third quarter of the year.

The original contract said that while the government could request that new tranche of vaccine, Pfizer could “reasonably” refuse it. But there was little expectation that Pfizer, an American company, would do so.