WASHINGTON — President-elect Joseph R. Biden Jr., racing against a surge in coronavirus cases and the emergence of a new variant that could worsen the crisis, is planning a vaccination offensive that calls for greatly expanding access to the vaccine while using a wartime law to increase production.

In a speech on Friday in Wilmington, Del., Mr. Biden told Americans that “we remain in a very dark winter,” allowing, “the honest truth is this: Things will get worse before they get better.”

“I told you,” he said, “I’ll always level with you.” But he also tried to offer hope for an end to a pandemic that has taken nearly 390,000 American lives and frayed the country’s economic and social fabric.

“Our plan is as clear as it is bold: get more people vaccinated for free, create more places for them to get vaccinated, mobilize more medical teams to get the shots in people’s arms, increase supply and get it out the door as soon as possible,” he said, calling it “one of the most challenging operation efforts ever undertaken by our country.”

He pledged to ramp up vaccination availability in pharmacies, build mobile clinics to get vaccines to underserved rural and urban communities and encourage states to expand vaccine eligibility to people 65 and older. Mr. Biden also vowed to make racial equity a priority in fighting a virus that has disproportionately infected and killed people of color.

“You have my word,” he declared, “we will manage the hell out of this operation.”

But the president-elect’s expansive vision is colliding with a sobering reality: With only two federally authorized vaccines, supplies will be scarce for the next several months, frustrating some state and local health officials who had hoped that the release of a federal stockpile of vaccine doses announced this week could alleviate that shortage.

Mr. Biden is clearly prepared to assert a role for the federal government that President Trump refused to embrace, using the crisis to rebuild the nation’s public health services and Washington’s money to hire a new health work force and deploy the National Guard. But many of his bold promises will be difficult to realize.

Even if Mr. Biden invokes the Korean War-era Defense Production Act, it may take some time to alleviate vaccine shortages. The law has been invoked already, to important but limited effect. His promises to build federally supported mass vaccination sites and develop new programs to serve high-risk people, including the developmentally disabled and those in jail, will work only if there are vaccines to administer.

“It won’t mean that everyone in this group will get vaccinated immediately, as the supply is not where it needs to be,” Mr. Biden conceded. But as new doses become available, he promised, “we’ll reach more people who need them.” 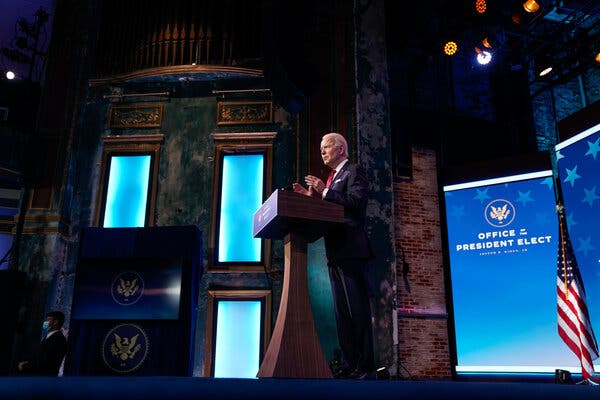 The vaccine distribution plan comes one day after Mr. Biden proposed a $1.9 trillion rescue package to combat the economic downturn and the Covid-19 crisis, including a $20 billion “national vaccine program.” The president-elect has said repeatedly that he intends to get “100 million Covid vaccine shots into the arms of the American people” by his 100th day in office.

Time is of the essence. With the number of deaths now up to nearly 4,000 a day, the Centers for Disease Control and Prevention sounded the alarm on Friday about a fast-spreading, far more contagious variant of the coronavirus that is projected to become the dominant source of infection in the United States by March, potentially fueling another wrenching surge of cases and deaths.

“I think we are going to see, in six to eight weeks, major transmission in this country like we’re seeing in England,” Dr. Michael T. Osterholm, the director of the Center for Infectious Disease Research and Policy at the University of Minnesota and a member of Mr. Biden’s coronavirus advisory board. “If we can set up vaccine clinics faster and more efficiently, how many lives do we save?”

In some respects, Mr. Biden’s plan echoes the one outlined this week by Mr. Trump’s health secretary, Alex M. Azar II, who encouraged states to vaccinate those 65 and older. The Trump administration has also pledged to employ pharmacies to administer shots and to invoke the Defense Production Act when necessary.

When Mr. Azar announced Tuesday that the federal government was releasing a stockpile of vaccine doses, some state health officials expected to get more in their weekly shipments to help address soaring demand as the pandemic rages out of control.

But now, the states face a stark reality. That stockpile consisted only of vaccines earmarked for booster shots for people who had already received a first dose. That means the release of this pool will not expand inoculations to a new group of people. Federal officials have said second doses will be prioritized in the weekly shipments to ensure everyone can get a booster shot.

Gov. Kate Brown of Oregon, a Democrat, posted on Twitter that she had received “disturbing news” on Thursday evening: “States will not be receiving increased shipments of vaccines from the national stockpile next week, because there is no federal reserve of doses.” She added, “I am shocked and appalled that they have set an expectation on which they could not deliver, with such grave consequences.”

A senior administration official said on Friday that the government expected the two companies producing vaccines, Moderna and Pfizer, to supply eight million to 12 million vaccine doses a week to the public over the next several weeks — shipments that will then be divided among those getting their first and second shots. The two companies have deals with the federal government to supply a total of 200 million doses to the United States — or enough to fully vaccinate 100 million people — by the end of March.

The European Union is also struggling with shortages, amid news that Pfizer plans to halt production of its vaccine for weeks as it upgrades to its manufacturing plant in Puurs, Belgium, to reach its goal of producing two billion doses this year — up from its earlier goal of 1.3 billion. The move will reduce deliveries to European Union member states as well as other countries.

The plan that Mr. Biden rolled out on Friday is part of a broader effort to use the current crisis to rebuild the nation’s crumbling public health infrastructure — long a goal of Democrats on Capitol Hill. As part of his stimulus package, he has also proposed increasing federal funding for community health centers and has called for a new “public health jobs program” that would fund 100,000 public health workers to engage in vaccine outreach and contact tracing.

“The details still have to be worked out, but this is really a critical recognition that state and local health agencies need to be shored up in a way that they haven’t been in decades,” Dr. Osterholm said.

A testing site on Thursday in Murray, Utah. The coronavirus continues to spread throughout the country.Credit…Kim Raff for The New York Times

But Dr. Marcus Plescia, the chief medical officer of the Association of State and Territorial Health Officials, expressed caution about the idea, and urged Mr. Biden to consult with members of his group before creating a new corps of public health workers.

“We really would like to see him bring a few more people with some on-the-ground experience onto his team,” Dr. Plescia said. “One of the things about a federal jobs corps is, how do those people interface with the state public health departments? You need to really think through that.”

Mr. Biden’s bid to improve public health infrastructure recalls the approach that he and President Barack Obama took with the recession-ravaged economy they inherited in 2009, when Mr. Biden was the newly inaugurated vice president. Rahm Emanuel, Mr. Obama’s chief of staff at the time, said then that a serious crisis should never “go to waste” because it might provide “an opportunity to do things that you think you could not do before.”

In an interview on Friday, Mr. Emanuel, who went on to serve two terms as the mayor of Chicago, praised Mr. Biden for his plan to invest in such clinics — also known as federally qualified health centers, or F.Q.H.C.s.

“The F.Q.H.C. is singularly the best preventive health care for hard to reach communities,” Mr. Emanuel said, adding, that “what’s great about this investment that the president-elect is making is it is laying down a foundation” for a strong public health response to future crises.

Also on Friday, Mr. Biden’s team announced that it intended to phase out Operation Warp Speed, the Trump administration’s fast-track vaccine initiative. Dr. David A. Kessler, a former head of the Food and Drug Administration who has been advising Mr. Biden on the pandemic, will lead the new administration’s effort to accelerate the development and manufacture of Covid-19 vaccines.

“OWS is the Trump team’s name for their program,” Jennifer Psaki, Mr. Biden’s spokeswoman, wrote on Twitter, using the program’s initials. “We are phasing in a new structure, which will have a different name than OWS.”