Since Scott Drew took over as head coach in 2003, it has been a golden era for Baylor men’s basketball. The team, which had made just one N.C.A.A. tournament appearance since 1950, has now made eight of the last 12 tournaments, including four appearances in the final 16.

But one team has continued to stand in Baylor’s way: Kansas. Since the Big 12 began play with the 1996-97 season, Kansas has won 19 regular-season conference titles. No other team has more than three. Baylor has none.

So it was significant when Baylor defeated No. 9 Kansas, 77-69, on Monday night, to remain undefeated and No. 2 in the country. Guard Jared Butler had 30 points, 8 assists and 7 3-pointers.

“Whenever we play Kansas, it’s supposed to be a big game, and I love big games and big moments,” Butler said after the game.

“Let’s not get this too twisted; Baylor is better than us right now,” Kansas Coach Bill Self told reporters after Monday’s game. 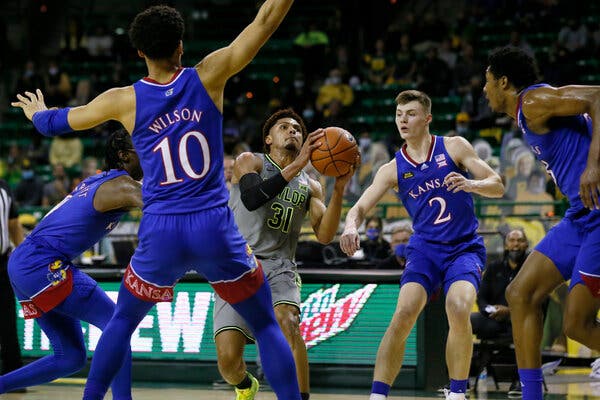 Butler, a junior, leads Baylor at 17 points a game, and is also known for his defense. But while Baylor has produced a couple of top 15 N.B.A. draft picks in the Drew era, Taurean Prince and Ekpe Udoh, Butler may go late in the first round or even slip to the second.

“What I love about this team is it’s a different guy each and every night, because you’ve got so many guys who are capable,” Drew told The Athletic. “Shooting can come and go, but the fact that when it’s someone’s night, they do such an unbelievable job of feeding that guy.”

As a team, Baylor is averaging 121.4 points per 100 possessions, fifth in the country and surrendering only 86.6, eighth in the country, according to College Basketball Reference.

Monday night’s win leaves Baylor and No. 1 Gonzaga, also undefeated, at the top of the men’s basketball pyramid. A game between them in early December had to be scrapped because of coronavirus positives at Gonzaga.

The Baylor men’s success this season is helping it close the gap with the university’s women’s team, which has three national titles this century, including in 2018-19, the last completed season, as well as an active streak of 11 straight final 16 appearances.

Texas is, of course, football country, so a potential N.C.A.A. men’s basketball champion there is a rarity. The state has produced only one men’s champion, Texas El-Paso (then Texas Western) in 1966.

As a caution to Baylor fans who might be getting revved up for a glorious finish, last season’s team also started fast. It was 24-1 before losing three of its last five, including a game against Kansas. Whether it could have become one of those teams that regain their form in the N.C.A.A tournament is unknown, after the big event in 2020 was canceled because of the pandemic.

The season before that, Baylor was knocked out in the second round of the N.C.A.A. tournament, by Gonzaga. Should they meet this year, it would figure to be much deeper in the tournament, and maybe even in the Final Four.

Baylor meets Kansas again, this time in Lawrence, Kan., in its regular-season finale on Feb. 27.