NAIROBI, Kenya — As the results of the American presidential election rolled in on Nov. 4, a young Sudanese couple sat up through the night in their small town south of Khartoum, eyes glued to the television as state tallies were declared, watching anxiously. They had a lot riding on the outcome.

A year earlier, Monzir Hashim had won the State Department’s annual lottery to obtain a green card for the United States only to learn that President Trump, in his latest iteration of the “Muslim ban,” had barred Sudanese citizens from immigrating to the United States.

The election seemed to offer a second chance, and when Mr. Trump was eventually declared to have lost the vote, Mr. Hashim and his wife, Alaa Jamal, hugged with joy and erupted in wedding-style ululations.

But the couple were on a knife’s edge for the next 11 weeks as fraud allegations, legal challenges and the mob attack on the Capitol seemed to cloud the results. Ms. Alaa, compulsively checking Facebook, had to stop herself. “I couldn’t stand it anymore,” she said.

She dared to look on Wednesday when Joseph R. Biden Jr., hours after being sworn in as president, rescinded the entire raft of Trump-era orders that had blocked people across the world, mostly Muslims like herself, from entering the United States. She wept with joy.

“Finally, happiness,” she said over the phone. “Now we start planning again.”

Few foreigners welcomed Mr. Biden’s election victory as enthusiastically as the tens of thousands of Muslims who have been locked out of the United States for the past four years as a result of the Trump-era immigration restrictions popularly known as the “Muslim ban.”

By one count, 42,000 people were prevented from entering the United States from 2017 to 2019, mostly from Muslim-majority nations like Iran, Somalia, Yemen and Syria. Immigrant visas issued to citizens of those countries fell by up to 79 percent over the same period.

But the human cost of Mr. Trump’s measures, stitched into the fabric of disrupted lives stained with tears and even blood, can hardly be counted — families separated for years; weddings and funerals missed; careers and study plans upended; lifesaving operations that did not take place. 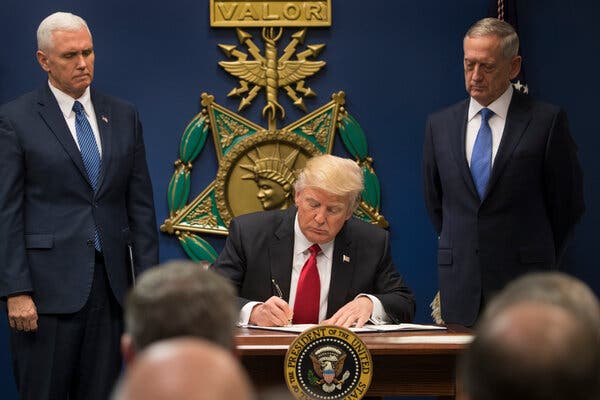 Then there is the damage to America’s reputation from a policy viewed by some countries as comparable to the worst stains of modern United States history, like the C.I.A.’s torture chambers, the abuses at Abu Ghraib prison and the internment of Japanese-Americans during World War II.

Mr. Biden said in his order revoking the restrictions that Mr. Trump’s measures — a lattice of one executive order and three presidential proclamations whose stated aim was to keep terrorists out — undermined American security, jeopardized its global alliances and presented “a moral blight that has dulled the power of our example the world over.”

For some, the reversal simply came too late.

Negar Rahmani had planned to sit out the Trump presidency. After the first immigration directive in January 2017 targeted her country, Iran, Ms. Rahmani, a graduate student of neuroscience at the University of Rhode Island, set aside plans to return home. She urged her parents to make do with video calls until a new American president had been elected.

But then the pandemic struck and in November Ms. Rahmani’s 56-year-old mother in Iran was hospitalized with Covid-19, leaving her daughter with an agonizing dilemma. If Ms. Rahmani, 26, flew home she risked being shut out of the United States for good. But her mother’s condition was deteriorating rapidly.

Torn, she prevaricated for two weeks until the disease intervened, and her mother died.

Now Ms. Rahmani is wracked by different feelings, she said in an interview: regret at not going home while her mother was alive, and a deep contempt for Mr. Trump and the immense pain his policy had caused her.

“I feel like I have been in a cage for four years,” she said, breaking into sobs. “I could have gone back every summer. My mom could have visited me. I feel the travel ban in my bones and skin.”

Other stories of broken hearts and dashed dreams are scattered across the Middle East and Africa, mostly in its most vulnerable and war-torn corners.

A Somali refugee, Muhyadin Hassan Noor, was stranded with his wife and six children at a dust-blown camp in northeastern Kenya despite having approval to resettle in Minnesota since 2017. “We were treated in a way that wasn’t right,” said Mr. Noor, 53.

Then there is Shawki Ahmed, a Yemeni-born New York City police officer who struggled for three years to get his wife and children out of Yemen, a country in a hellish civil war, to the family home in Jamaica, Queens. “You’re a police officer. You’re out there risking your life, yet you don’t know what’s going on with your kid,” said Mr. Ahmed, 40.

The family eventually got permission to come to America in October but the sting of injustice lingered. “Trump betrayed so many law-abiding citizens based on their religion and their last name,” Mr. Ahmed said.

Dahouk Idress, a Syrian mother in Damascus, said last week that she eagerly awaited Mr. Biden’s inauguration so she could finally see her son for the first time in four years.Credit…Louai Beshara/Agence France-Presse — Getty Images

By the end, after over 100 court challenges and several iterations, Mr. Trump’s “Muslim ban” had become an African one, too. It barred entry to most citizens from Iran, Libya, North Korea, Somalia, Syria and Yemen; halted immigration from Eritrea, Kyrgyzstan, Myanmar and Nigeria; restricted selected people in Tanzania; and included Venezuela, too.

The ban was upheld in the Supreme Court, which said that despite the president’s incendiary words about Muslims, the ban was justified as an antiterrorism policy. But the ruling came with a searing dissent from Justice Sonia Sotomayor, who likened it to the 1944 Korematsu v. United States decision that upheld the detention of Japanese-Americans during World War II.

Since the doors were flung open this past week, many prospective visitors have been picking up the pieces to try again. A travel agent in Libya said there had been a sudden interest in American visa applications. In Nigeria the Biden election will likely “flood the visa offices,” said Olajumoke Yacob-Haliso, a political-science professor at Babcock University in Ogun state.

Despite the worldwide backlash over the ban, America still holds an immense global appeal, especially to citizens of fragile nations. “It’s oof, relief, an optimistic feeling,” said Nizar Asruh, a Libyan in San Diego who said he hoped his mother could now get a visa to come visit.

As well as expediting outstanding applications, Mr. Biden has ordered an immediate review of all visas rejected under Mr. Trump’s measures, and an assessment of contentious “extreme vetting” security procedures that include screening an applicant’s social media feeds.

But immigration advocates warn that a return to the pre-Trump system will not be a panacea.

“Even before, the system was discriminatory and not welcoming to Muslims,” said Gadeir Abbas, a staff attorney for the Council on American-Islamic Relations. “It was under the Obama administration that you had the expansion of a terrorism watch list to over a million names that, as far as we can tell, is essentially a list of Muslims.”

Even among America’s most ardent admirers, its standing because of the ban has fallen hard. In Sudan, Ms. Jamal, whose husband won the green card lottery, said she had dreamed of moving to America since she was a child.

“I want my children to have a good life,” she said. “And I want them to be free.” But a certain cynicism had crept into her view of American leaders.

“They are all the same,” she said. “For Trump, we were bad Muslims. For Biden, we are good Muslims. At the end of the day, it doesn’t matter — they’ll use us if it’s good for them. We’re just pawns in a chess game.”

Hours after being sworn in as president, Mr. Biden rescinded the entire raft of Trump-era orders that had blocked tens of thousands of people across the world from entering the country.Credit…Amr Alfiky/The New York Times

As American politics tumbled into violence recently, others saw jarring resonances with their own countries. Diab Serrih, a former political prisoner from Syria, said the mob storming the Capitol reminded him of the thugs who remain loyal at all costs to Syria’s dictatorial leader, Bashar al-Assad.

Having been turned away from America in 2017 Mr. Serrih, now living in the Netherlands, said he’d like to try again. Still, he was nervous. “The idea of emigrating is scary,” he said. “What if in a few years there’s another Trump?”

Activists are pressing Congress to pass the No Ban Act, a proposal supported by Mr. Biden to prevent future presidents from enacting sweeping travel restrictions.

Still, the damage assessment from Mr. Trump’s ban is likely to linger given that its blunt intent and haphazard application left a varying impact on the affected countries.

In Myanmar, for instance, which was added to the list just last year, the Trump ban affected hardly anyone at all, rights groups say. Only immigrant visas were affected and, almost as soon as the ban came into effect, Myanmar shut its borders to stem the pandemic.

“I still haven’t found the answer for why Myanmar was on the list,” said U Ye Myint Win of Fortify Rights, a regional human rights advocacy group.

For decades they made up the largest pool of visa applicants to the United States, according to visa lawyers and Iranian-American advocacy organizations. Before the 1979 revolution, young Iranians flocked to American universities and returned home with their degrees, among them Iran’s foreign minister, Javad Zarif, and the head of the Atomic Energy Organization, Ali Akbar Salehi.

After 1979, and the subsequent collapse of diplomatic relations with the United States, the trend shifted: Iranians who came to America tended to stay, and encouraged their relatives to follow. The Trump restrictions, applied from 2017, caused those numbers to plummet.

For decades they made up the largest pool of visa applicants to the United States, according to visa lawyers and Iranian-American advocacy organizations.Credit…Ebrahim Noroozi/Associated Press

Of 45,000 Iranians who applied for visa waivers between January 2017 and July 2020, only 7,000 were granted visas, according to the State Department. “The impact was across the board — financially, emotionally, educationally, professionally, romantically,” said Reza Mazaheri, a New York-based immigration attorney who represents many Iranians.

For others, the ban is a closed, tragic chapter.

Mohamed Abdelrahman, a Libyan businessman, thought he hit the jackpot in 2017 when he won a green card lottery, offering an escape route from a country that was plunging deep into chaos, said his nephew, Mohamed Al-Sheikh.

But the Trump ban forced Mr. Abdelrahman to delay and, before he could leave Libya, he suffered a stroke and died.

If there had been no ban, “his life might have been completely different,” said Mr. al-Sheikh, 34, speaking by phone from Tripoli. “He just needed a stable place to live for the rest of his life.”