PARIS — The sprawling campus of the École Polytechnique, one of the world’s finest engineering schools, has long been a magnet for major French industrial and energy companies, eager to attract some of France’s brightest minds.

So when it was announced last year that the oil and gas giant Total would establish a research center on campus, located southeast of Paris, it seemed like a natural fit.

Instead, it sparked an uproar. Hundreds of students voted against the research center. At a time when engineers and scientists should be leading the way to a newly sustainable world, they argued, among other things, the project gave undue influence to a company that remains a world leader in fossil fuels.

“I find it disturbing to be influenced by Total, which has a rather biased vision of the energy transition,” said Benoit Halgand, 22, who is in his final year at the school. He added the company “will always want to use oil and gas for many years to come.”

A spokesman for Total said in a written response that the group is aiming for carbon neutrality by 2050 and that its research center has “the sole objective of accelerating innovation and research on low-carbon energies.” 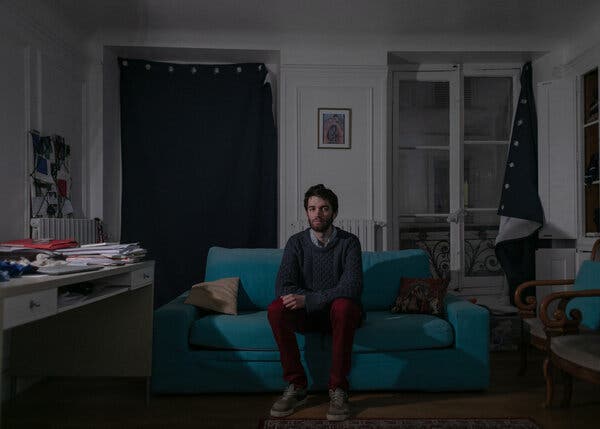 “I find it disturbing to be influenced by Total, which has a rather biased vision of the energy transition,” said Benoit Halgand, a student at The École Polytechnique.Credit…Andrea Mantovani for The New York Times

The clash at the École Polytechnique was just the latest of the clashes taking place at France’s elite campuses, long seen by ambitious students as the path to success. Now students alarmed by a warming planet are challenging the corporations that see them as potential future employees.

“By going to class, by working, we take part in a world that we denounce,” said Caroline Mouille, a 23-year-old engineering student in Toulouse, in southern France. “Cognitive dissonance is huge.”

Frustrated by the disparity between the world they dream of and the one they are offered, students are pressuring universities to put climate change and other environmental issues at the core of their curriculums. Some schools have taken steps in that direction, but critics say it is not nearly enough.

The environment has become a primary concern in France, a country where climate change protests drew thousands of teenagers to the streets in 2019 and where president Emmanuel Macron recently announced a referendum to add environmental protection to the Constitution.

The growing environmental movement at France’s most prestigious universities, or “Grandes Écoles,” the traditional training ground for corporate executives and top civil servants, has profound implications for the next generation of the country’s elite. The conflict has pitted students against consumerism and against what they consider to be the profit-driven nature of some of France’s largest corporations, including L’Oréal.

Student activism there has been rare in the past, so the calls for change have surprised many people, particularly at the École Polytechnique, which is overseen by the defense ministry and where students, considered members of the armed forces, are normally bound to confidentiality.

A second-year student at The École Polytechnique worked at the Sustainable Development association of the campus.Credit…Andrea Mantovani for The New York Times

Mr. Halgand said that environmental concerns had given birth to “a fairly new criticism” among young people of today’s economic and social systems.

“In the past, among engineers, there was often this idea of doing technical feats,” he said. “Today, we ask ourselves, ‘Why? What is the environmental and societal impact behind it?’”

In 2018, a “Manifesto for an ecological awakening,” written by students at top universities, called for placing “the ecological transition at the core of our social project,” and collected some 30,000 student signatures in just a few weeks.

Central to their demands was a stark reality: environmental issues remain largely under-taught in higher education. A 2019 study by the think tank The Shift Project showed that at 34 French universities, less than one-quarter of degree programs offered any courses in climate and energy issues, and most of those did not make such a class mandatory.

A flurry of open letters from students have called on universities to rethink their teaching from top to bottom — in often unsparing terms.

“Our education,” read a recent letter signed by some 2,000 students and alumni of HEC Paris, one of Europe’s top business schools, “does not sufficiently integrate ecological and social issues, reducing them at best to ‘negative externalities’ and at worst to marketing opportunities.”

Cécile Renouard, a philosopher who teaches at several universities, said that courses on the environment in higher education “are not always radical enough and not systemic enough.”Credit…Andrea Mantovani for The New York Times

Responding to student demands, some universities have started revising their curriculums. A mandatory three-day seminar on climate change for every new student was introduced at the École Polytechnique two years ago, and the National Institute of Applied Sciences of Lyon has committed to overhauling its teaching to educate all students about environmental issues.

Matthieu Mazière, the director of studies at the Mines ParisTech engineering school, said that students have challenged the content of courses, in addition to the air travel of professors. “They force us to question ourselves,” he said.

Critics, however, say that the questioning hasn’t gone far enough.

“We feel like we’ve understood and they haven’t,” said Lise-Marie Dambrine, a recent graduate from a political studies institute.

Cécile Renouard, a philosopher who teaches at several universities, said that courses on the environment in higher education “are not always radical enough and not systemic enough.”

“The challenge is also to show how ecological questioning invites us to revisit all our subjects,” she added.

The Transition Campus has drawn some 700 students to its campus, an 18th century chateau about 40 miles southeast of central Paris.Credit…Andrea Mantovani for The New York Times

In 2018, Ms. Renouard founded the Campus de la Transition, or the Transition Campus, an alternative academic institution where a range of subjects, from economics to law, are taught through environmental lenses.

It has drawn some 700 students to its campus, an 18th century chateau about 40 miles southeast of central Paris, surrounded by gardens where students grow leeks and gourds that will eventually end up in the pots of the campus canteen.

The Transition Campus has partnered with several universities to train students and has recently published “The Great Transition Manual,” commissioned by France’s minister of higher education, on putting environmental and social justice issues at the heart of university programs.

Ms. Dambrine, 23, said that her experience on the Transition Campus had been “a shock,” giving her “the desire to shake things up.”

Students having dinner at the Transition Campus, where some produce grown onsite is used in the canteen.Credit…Andrea Mantovani for The New York Times

The students behind the 2018 manifesto have formed an organization that regularly challenges major French companies by publishing reports tracing their environmental footprints, and urging their peers not to work for businesses that fail to change.

“Companies are doing everything they can to recruit us,” said Mr. Halgand, the École Polytechnique student. “So when we tell them: ‘we’re not coming because you’re destroying the planet and because we don’t support the economic system you’re in,’ it scares them,” he said.

That approach has run into resistance — not surprisingly — in both academia and the corporate world. At the École Polytechnique, following the student protest, the site of the Total research center was eventually moved — 700 feet from its original location.

The new location for the research center of Total, 700 feet from its original location.Credit…Andrea Mantovani for The New York Times

A few months ago, the student organization published a critical report on the cosmetics giant L’Oreal. While it recognized the company’s efforts to “reduce its impact on the environment,” it also questioned “the very usefulness of all the group’s activities” — essentially denouncing what the students saw as pointless consumerism.

Jean-Claude Legrand, L’Oreal’s executive vice president for human resources, said the company welcomed the push for environmental change, and “we emphasize it more today.” But, he said, there is no dialogue to be had with students who start to “question the business world,” challenging the company’s very existence.

Philippe Drobinski, a climatologist at the École Polytechnique, said that “a critical analysis” of companies’ environmental footprint was necessary but objected to a systematic understanding of all issues through the prism of the environment.

Despite his reservations, he praised the student movement, saying, “If we wanted things to change, it had to come through them.”