CAPE TOWN, South Africa — As a dangerous variant of the coronavirus first discovered in South Africa sickens and kills thousands across the country, Jan Matsena has shown up every day to stock the shelves at a Cape Town supermarket, terrified that he too will catch it.

A neighbor died in December, then a co-worker this month. Now Mr. Matsena is waiting for a vaccine so he can return home to his township and hold his baby daughter again. But in South Africa, the country hit hardest so far by the variant, inoculations have not yet started.

“The wait for this vaccine has been long, long now,” said Mr. Matsena, a first-time father who has been living away from his family for fear of exposing them. “People are passing away, people are losing jobs. It’s trauma.”

While more than 90 million people worldwide have been vaccinated, only 25 in all of sub-Saharan Africa, a region of about 1 billion people, have been given doses outside of drug trials, according to the World Health Organization.

But as new variants like the one discovered in South Africa migrate to more countries — including the United States — it is becoming ever clearer that the tragedy for poorer countries could become a tragedy for every country. The more the virus spreads, and the longer it takes to vaccinate people, the greater chance it has to continue to mutate in ways that put the whole world at risk.

Recent studies suggest that at least four vaccines that are effective at preventing infection with the original virus did not perform as well against the variant found in South Africa. That variant is also more infectious — as is another one, discovered in Britain — and it is now estimated to make up 90 percent of all cases in South Africa, according to data compiled by researchers. It has turned up in dozens of other countries.

Inoculation prompts the immune system to make antibodies to the virus, but as mutations change its shape, the virus can become more resistant to those antibodies. In the worst case, failing to stop the spread of the virus globally would allow more mutations that could make existing vaccines less effective, leaving even inoculated populations vulnerable.

“This idea that no one is safe until everyone is safe is not just an adage, it is really true,” said Andrea Taylor, the assistant director at Duke Global Health Innovation Center.

Even in the most optimistic scenarios, Ms. Taylor said, at the current pace of production, there will not be enough vaccines for true global coverage until 2023. The current rollout plans across Africa are expected to vaccinate only 20 to 35 percent of the population this year if everything goes right. 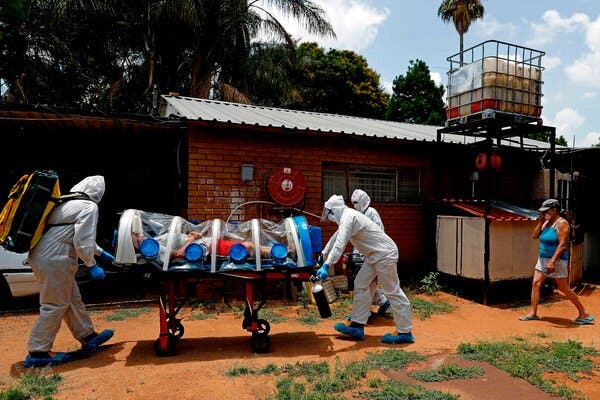 Paramedics taking a man showing symptoms of Covid-19 from his home this month in Pretoria.Credit…Phill Magakoe/Agence France-Presse — Getty Images

And while some wealthy countries have secured enough vaccine to cover their populations multiple times, South Africa has secured just 22.5 million doses for its 60 million people, and many nations lag farther behind.

That disparity is at the heart of what Tedros Adhanom Ghebreyesus, the head of the World Health Organization, says could soon become a “catastrophic moral failure,” as rich nations rush to buy up vaccine stocks while leaving poor and middle-income nations struggling to find supplies.

South Africa’s first million doses, made by AstraZeneca, are set to arrive there on Monday, and officials say it will take as long as two weeks to start giving the shots. AstraZeneca’s vaccine, developed with the University of Oxford, is currently the world’s most affordable option, developed with low and middle-income nations as its target. The company has not released any information about its effectiveness against the variant but is expected to do so soon.

Another 9 million doses are on order from Johnson & Johnson, whose shot does not yet have regulatory approval. On Friday, the company announced that the efficacy of its vaccine dropped from 72 percent in trials conducted in the United States to 57 percent in those conducted in South Africa.

Graves of members of a Muslim community who have died since the start of the pandemic fill a new section at the Avalon cemetery in Lenasia, South Africa.Credit…Bram Janssen/Associated Press

There are some encouraging signs. A growing body of preliminary evidence — mainly gleaned from the lightning-fast rollout in Israel — suggests that vaccines are performing well not just in trials, but in the real world, driving down new infections.

But it remains to be seen how well they help contain the variants already in circulation. Scientists hope that if needed, vaccines can be modified and booster shots developed to tackle new variants, but that takes time. And for a world struggling to right itself, time is of the essence.

Dr. Tulio de Oliveira, a professor and geneticist at the Nelson Mandela School of Medicine in Durban, who had helped discover the variant originally found in South Africa, said its emergence should serve as a wake-up call.

“One of the things this variant should highlight to the whole world is the need to control transmission — not only in their own country but in the whole world,” he said.

And while nations have rushed to seal their borders, the variants are already spreading in dozens of countries — just as the virus eluded national boundaries last winter. Brazil, for instance, appears to have incubated at least two worrisome variants, which had already slipped its borders before many countries began to cut off air travel from there.

The burden of supplying vaccines to low- and middle-income nations hangs heavily on a nonprofit group, Covax, formed by a coalition of international organizations.

Although more than 190 countries have pledged to obtain vaccines through Covax, many of them are also striking deals directly with drug companies, or belong to multinational groups that are doing so. That threatens to drive up prices and delay delivery of doses through Covax.

Covax has announced that it has secured 2.1 billion doses for 2021, but it is unclear how many of those will actually be delivered in 2021.

The hope is that rollouts to poorer countries can begin in earnest in the next month or two.

“Covax is necessary but not sufficient,” Ms. Taylor said. “It is the only mechanism we have for global equity. We need it and we need it to succeed. But even if they are successful, it does not get countries close to herd immunity.”

Orin Levine, the director of global delivery programs at the Bill and Melinda Gates Foundation, said “the bare facts are that by the end of this year, probably 75 percent of population in high-income countries will be vaccinated,” compared to 25 percent in low-income countries.

For African nations, the slow pace of the rollout feels frighteningly familiar.

When another scourge — HIV/AIDS — was killing millions of people each year, Africa had the largest number of infections and deaths. Still, it took at least six years before the lifesaving treatment available in wealthy nations was made available for Africans.

AIDS killed 12 million people in Africa in a decade, even as mortality in the U.S. dropped drastically, according to analyses by the Africa Centers for Disease Control and Prevention. Disputes over international property rights delayed the production of more antiretroviral drugs or cost-effective generics.

Now, India and South Africa have teamed up to lobby the World Trade Organization to compel drug companies to share their intellectual property on coronavirus vaccines, as they eventually did with HIV/AIDS treatment.

“What you need right now is the explicit cooperation of every single government and every single pharmaceutical company that says we are in a pandemic, we are on the road to disaster,” said Fatima Hassan, a South African human rights lawyer who fought for HIV/AIDS drugs and has now pivoted to Covid-19 vaccines. “We’ve got to share the technology and spend billions to save trillions.”

A woman waiting to be tested for Covid-19 this month in the parking garage of a shopping mall in Johannesburg.Credit…Jerome Delay/Associated Press

The African Union announced the purchase of 300 million vaccines this month, to be distributed through the regional body’s African Medical Supplies Platform, according to Nicaise Ndembi, senior science adviser for the Africa Centers for Disease Control and Prevention.

In countries like Mozambique, Zimbabwe and Zambia, where the variant found in South Africa has been thought to be driving surges in infections, authorities have no clear answers about when vaccines will arrive.

South Africa, meanwhile, has been relatively assertive in its pandemic response, taking steps that have caused controversy within the country. President Cyril Ramaphosa has reintroduced a 9 p.m.-to-5 a.m. curfew, limited attendance at funerals and religious gatherings, outlawed the sale of alcohol and made masks mandatory in all public spaces. Not wearing a mask can lead to a fine or six months in jail.

When vaccinations are expected to begin, about mid-February, health workers will be first in line, followed by those deemed most at risk of serious illness.

For Mr. Matsena, the supermarket employee, who is 31 and healthy, it could be a long wait.

“It would be better if it arrived earlier because now people are terrified of this pandemic,” he said. “It’s worse, much worse.”