Former President Donald J. Trump, determined to remain a force in G.O.P. politics, is gaining new opportunities with a crucial Senate seat unexpectedly coming open in Ohio, an ally announcing for governor of Arkansas and rising pressure on Republicans in Congress who did not stand with him during this month’s impeachment vote.

The surprise announcement on Monday by Senator Rob Portman of Ohio that he would not seek a third term sparked a political land rush, with top strategists in the state receiving a flood of phone calls from potential candidates testing their viability. One consultant said he had received calls from five would-be candidates by midday.

That opening, along with another statewide contest next year in which Gov. Mike DeWine is expected to face at least one Trump-aligned primary challenger, is likely to make Ohio a central battleground for control of the Republican Party, and an inviting one for Mr. Trump, who held on to Ohio in the election while losing three other Northern battleground states.

Mr. Trump has only been out of the presidential office five days and has little in the way of political infrastructure. He has told aides he would like to take a break for several months.

But the former president has remained the party’s strongest fund-raiser, with tens of millions in PAC money at his disposal, and he retains an enduring base of Republican support across the country. Perhaps most important, he harbors a deep-seated desire to punish those he believes have crossed him and reward those who remain loyal.

So far he has focused primarily on Georgia, where he believes the Republican governor and secretary of state betrayed him by certifying his loss there. Both are up for re-election in 2022. And he took something of a test run over the weekend by getting involved in the leadership fight in Arizona’s Republican Party, after Kelli Ward, the firebrand chairwoman, asked for his help in gaining re-election, according to a person familiar with the discussions.

Already there is a movement at the state and local levels to challenge incumbent members of Congress seen as breaking with the former president, starting with the 10 Republicans who voted to impeach him this month.

The overwhelming consensus among Ohio Republicans is that a Trump-aligned candidate would be best positioned to win a competitive Senate primary, and no potential candidate has a better claim to Mr. Trump’s voters in the state than Representative Jim Jordan, who was Mr. Trump’s chief defender during his first impeachment trial and received the Presidential Medal of Freedom during the former president’s final days in office.

“Jim is well positioned if in fact he’s ready to take that leap; I’m not sure there’s anybody that would beat him,” said Ken Blackwell, a former Ohio secretary of state and longtime Portman ally who last month served as an Electoral College voter for Mr. Trump. Referring to Mr. Trump’s legion of supporters, Mr. Blackwell added: “In Ohio, it’s going to be who has the track record to show that their agenda respects the newly realigned party base.” 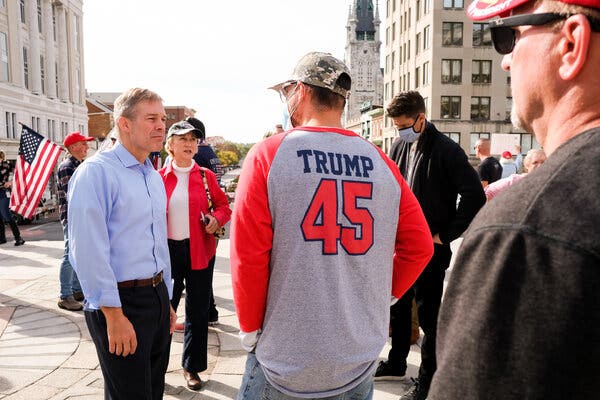 Representative Jim Jordan of Ohio was Mr. Trump’s chief defender during his first impeachment trial and could seek the Republican nomination for an open Senate seat in 2022.Credit…Gabriela Bhaskar for The New York Times

Mr. Trump is now ensconced at his Mar-a-Lago resort in Florida, where aides are building something that can serve as an office. He’s been golfing several times, and was spotted by people at his club in Florida playing with the brother of the former tennis star Anna Kournikova on Sunday.

His advisers have had discussions about whether to get him back on some form of social media platform, although they insist that he does not need to be on Twitter or Facebook to raise money, and that his email solicitations continue to work well. On Monday he formally opened the Office of the Former President, to manage his “correspondence, public statements, appearances, and official activities.”

As President Biden’s inauguration approached, Mr. Trump began telling some allies that he was considering forming a third party if Republicans moved to convict him in the Senate trial. But by Saturday, after his own advisers said it was a mistake, Mr. Trump started sending out word that he was moving on from his threat.

“He understands that the best thing for his movement and conservatism is to move forward together, that third parties will lead to dominance by Democrats,” said Senator Lindsey Graham, the South Carolina Republican who is a close ally of Mr. Trump.

Advisers to the president say he has just over $70 million in his PAC, Save America, with few restrictions on what he can do with it. For now, most of his staff is on a government payroll afforded to former presidents for a period of time after they leave office.

Officials are working to mend Mr. Trump’s relationship with Representative Kevin McCarthy, Republican of California and the House minority leader, whom Mr. Trump called a vulgarity for his House floor speech denouncing the former president’s rally address before the riot at the Capitol on Jan. 6. A senior Republican said that aides to the two men were trying to arrange a meeting or a call in the coming days. And Mr. Trump’s eldest son, Donald Trump Jr., spoke with Mr. McCarthy recently and the two are on good terms, a person briefed on the call said.

Mr. Trump would like to seek retribution against House members who voted against him, and he has been particularly angry with Representatives Anthony Gonzalez of Ohio and Fred Upton of Michigan, advisers said. He will also at some point focus on the governor’s race in Arizona, where Doug Ducey cannot seek re-election; Gov. Greg Abbott’s re-election bid in Texas; and the Senate race in North Carolina, as places where he can show strength, the advisers said. (One adviser disputed that Mr. Trump would have an interest in the Texas race.)

In Ohio, Mr. Gonzalez faces a potential primary challenge from Christina Hagan, a former state legislator whom he defeated in a 2018 primary. Ms. Hagan lost in the general election last year to Representative Tim Ryan, a Democrat, in a neighboring district. She said in an interview Monday that she would decide which, if any, race to enter in 2022 after Ohio redraws its congressional districts; the state is likely to lose one seat and Republicans control all levers of redistricting.

“A lot of people elected what they thought was conservative leadership and now are witnessing somebody cutting against their values,” Ms. Hagan said, alluding to Mr. Gonzalez’s vote to impeach.

Mr. Gonzalez’s office did not respond to emails seeking comment.

Mr. Trump’s deepest hostility is reserved for Gov. Brian Kemp of Georgia, advisers said, and they expect he will expend the most energy trying to damage Mr. Kemp’s re-election bid. The governor’s original sin was in choosing Kelly Loeffler over Mr. Trump’s favored candidate, Doug Collins, to fill a vacant Senate seat in 2019, but it evolved into something more consuming as Mr. Trump repeated his debunked claims of widespread fraud in the state and held Mr. Kemp responsible for not doing enough to challenge the election results.

Mr. Collins, a hard-line Trump backer, hasn’t decided whether to challenge Mr. Kemp or seek the Republican nomination against Senator Raphael Warnock, the Democrat who defeated Ms. Loeffler in a special election and will face voters again in 2022, or if he will choose not to run for anything, a Collins aide said Monday.

Mr. Trump is likely to support a primary challenge to Gov. Brian Kemp, a Republican, in Georgia.Credit…Dustin Chambers for The New York Times

Next on Mr. Trump’s personal hit list is Representative Liz Cheney, the Republican from Wyoming, people close to him said. Ms. Cheney was the only member of the House G.O.P. leadership to vote to impeach. It’s unclear whether Mr. Trump will target her seat, or simply her leadership post in the House, but advisers said they anticipated that he would take opportunities to damage her.

Sarah Longwell, the executive director of the Republican Accountability Project, an anti-Trump group, said she and her colleagues planned to raise and spend $50 million to defend the 10 pro-impeachment House Republicans in primary contests and attack those who voted to object to the Electoral College results after the Jan. 6 riot at the Capitol. She said the group would aim to defeat Mr. Jordan in an Ohio Senate primary if he runs against an establishment-minded Republican.

Mr. Jordan’s spokesman did not respond to messages on Monday.

The 2022 map will be the first real test of Mr. Trump’s durability in the party. While Ms. Sanders is running for governor in Arkansas, rumors that his daughter Ivanka would run for Senate in Florida are unlikely to develop further. And though his daughter-in-law, Lara Trump, was said to be considering a Senate run in North Carolina, people close to the family say it is less clear what she will do now that Mr. Trump lost.

Mr. Trump’s advisers are more focused on the looming impeachment trial. He is working closely with Mr. Graham, who has argued to his colleagues that Mr. Trump’s Senate trial sets a bad precedent.

Mr. Graham helped him retain a South Carolina-based lawyer, Butch Bowers, who is also working to fill out a legal team with colleagues from the state, Mr. Graham and others said. Mr. Bowers is expected to work with a Trump adviser, Jason Miller, on some kind of response operation.

Unlike his first impeachment trial, when the Republican National Committee engaged in a constant defense of the president, including paying for his lawyers, this time it is expected to focus only on rapid response, including calling the Senate trial unconstitutional and a procedural overreach, two people familiar with the committee’s plans said.