MELBOURNE, Australia — By sheer force of will, professional tennis inched toward normalcy this week, with a flurry of events in a country that has managed to nearly smother the coronavirus.

The three tournaments and a men’s team competition called the ATP Cup, in which players compete for their countries, have turned Melbourne Park into a sea of matches with the gates open to spectators. Hundreds of matches were scheduled this week at the tennis complex, which is on the banks of the Yarra River, just a few hundred yards down a hill from this city’s downtown. The smaller events lead into the Australian Open, the centerpiece of the summer tennis season here, which is scheduled to begin on Monday.

A stern reminder of the challenge to public health represented by the events came Wednesday when Australian Open organizers said a hotel quarantine worker had tested positive for the virus. That prompted a suspension of play on Thursday and orders for all of those associated with the tennis events to isolate in their rooms until they return a negative test.

The positive test ended a 28-day run of zero community transmission in the state of Victoria, The Age, a newspaper in Melbourne, reported. The Australian Open, the first Grand Slam tournament of the year, was not immediately affected, but the positive test made clear that the event — with all its planning and precaution — could be upended if more people are infected.

Before the latest setback, the word “lucky” kept flying out of the mouths of the players — lucky that their sport happens to begin its year in an isolated, island nation that decided months ago that it would do nearly anything it could to limit the spread of the coronavirus. The federal and state governments specially allowed more than a thousand people to travel from overseas for the tournament, requiring them to serve 14 days in varying degrees of lockdown to reduce the risk of bringing Covid-19 back into the community. For the players, that was the ante to compete for more than $80 million in prize money for all the events.

And yet the massive effort of holding these competitions has illuminated an unpleasant truth for a sport that normally hopscotches the globe for 11 months each year. No one knows exactly what will happen to professional tennis for the rest of 2021 when the competitions in Australia conclude at the end of the month.

The problem is that two of the main ingredients for tennis to be successful are open international borders and large crowds in big cities, neither of which are in abundance at the moment.

There are tournaments on the calendar everywhere from the Middle East to South America and Florida, but it’s anyone’s guess how they might take place, what officials in those countries will require of anyone who wants to enter their borders, or whether players will be able to travel freely in and out of their own countries.

With this week’s tuneup events shoehorned into the schedule and moved to Melbourne from their usual locations elsewhere in Australia and New Zealand, attendance has been sparse, but a trickle of spirited fans does stream through the gates each day — especially the native Serbs screaming for Novak Djokovic. A player hits a terrific shot, and a roar echoes through the courts, just as it is supposed to. Players are going through their usual routines of practice sessions, matches and massages, plus meals and coffee dates among locals in the city’s downtown restaurants.

Getting to this point took months of negotiations with government officials, tens of millions of dollars, 17 chartered jets to fly the players and other essential tennis workers to the country and the hiring of hundreds of people to manage the two-week quarantine. The payoff comes next week when the tournament will allow up to 30,000 fans a day who will be sectioned off into three zones to limit each person’s exposure to someone who might potentially test positive. 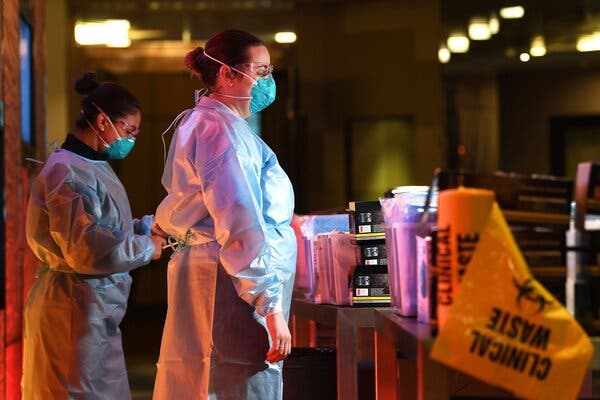 Healthcare workers stood at a personal protective equipment station inside one hotel where players were staying.Credit…James Ross/EPA, via Shutterstock

“In Europe, it’s going to be I think far more challenging to experience something that we are experiencing here,” said Djokovic, the world No. 1 and the leader of a nascent players’ association. “We might as well enjoy it as much as we can.”

As Andrea Gaudenzi, chairman of the Association of Tennis Professionals, put it Tuesday night, “We live in the now.”

Australia, though, has had its difficulties, too. After 10 people on three flights tested positive, health officials ordered 72 players into a hard 14-day lockdown. That meant players who expected to practice, train and be outside for up to five hours each day had to stay isolated in their hotel rooms even if they continued to test negative for the coronavirus.

Craig Tiley, the chief executive of Tennis Australia, held teleconferences with the players for up to two hours each day. The conversations turned combative at times and included in-depth discussions about how tennis could operate for the rest of the year. Would France and Britain follow Australia’s lead and require similarly long quarantine periods for players as they attempt to hold the French Open and Wimbledon from late May through mid-July?

Prime Minister Boris Johnson of Britain, whose National Health Service has been withering under the strain of treating Covid-19 patients, has moved toward requiring 10-day hotel quarantines for people arriving from more than 20 nations where new variants of the virus pose a risk.

“I don’t think many people will come if it’s two weeks of hard lockdown,” Tiley said.

Gaudenzi, the ATP chairman, said the tours were trying to figure out how to get players from event to event while complying with national rules for international arrivals. He said players might simply have to play less for a time. Playing in one country on a Tuesday and another the next Monday may be impossible.

Players may have to travel to one continent and remain there for two months — Europe beginning in the spring, North America in midsummer. But that carries complications for players who have families, as the tour now has a limit on how many people players can travel with.

“There is no perfect answer,” Gaudenzi said. “The key word is flexibility — and a lot of patience.”

Naomi Osaka, the three-time Grand Slam champion, said on Sunday that after Australia she would not play again until the Miami Open, which is scheduled to begin in late March.

“You have to plan your tournaments more because you’re not sure what’s going to happen,” Osaka said. “That’s sort of the thought process everyone has right now.”

Many top players were looking forward to the Olympics this summer in Tokyo, where officials remain determined to press ahead. The Olympics offer a huge opportunity for tennis to be a showcase in front of casual fans, but Rafael Nadal, the 20-time Grand Slam champion, said it would be very difficult for professional tennis to combine a long quarantine for the Olympics with tour schedules.

All the players can do, he said, is follow “the people who know about the virus and about protecting the people in every single country, just follow their instructions.”

That becomes far more difficult later this month, when tennis leaves Australia and its guaranteed paydays for the uncertainty of the rest of the year.

“I don’t know,” Serena Williams said when asked how much tennis she thought she would play this year. “It’s very hard to say. Everything looks good here so far, but it’s winter in the rest of the world.”