MOSCOW — For years, the Kremlin tried to ignore the opposition leader Aleksei A. Navalny, right down to avoiding the very mention of his name.

But by Sunday, Russian officials had drastically reversed course.

President Vladimir V. Putin’s spokesman appeared on a prime-time show on state television and denied Mr. Navalny’s assertion that Mr. Putin had a secret palace on the Black Sea. On another marquee program, the host devoted 40 minutes to Mr. Navalny, who was described as engaging in “political pedophilia.” And the evening newscast showed tweets by Western officials in support of Mr. Navalny as proof that he was working against Russian interests.

The tightly scripted, all-hands attack on Mr. Navalny on Sunday underlined how the opposition leader’s dramatic return to Russia a week earlier and his arrest have changed the landscape of Russian politics.

Mr. Putin remains in firm control of the levers of power. But Russians unhappy with their president — long a weak, diverse and atomized group — suddenly have a clear leader around whom to rally, and the government appears unsure about how to fight back.

On Saturday, tens of thousands of Russians took to the streets in support of Mr. Navalny in more than 100 Russian cities — protest on a scale unseen in the country in years. Quiet Siberian cities saw crowds in the thousands, while in Moscow, a survey showed that more than one-third of the participants had never protested before.

“People are tired of this authoritarian regime, of the chaos, of the corruption,” said Viktor F. Rau, a liberal activist in one of those Siberian cities, Barnaul. “Navalny was the spark.”

With more protests planned for next weekend, and a court hearing that could send Mr. Navalny to prison for years scheduled for Feb. 2, a new crackdown on the opposition and a harsh prison sentence for its leader might backfire, sending yet more people into the streets.

Either way, analysts say, the standoff between the Kremlin and its critics seems poised to intensify, injecting new volatility into a country in which Mr. Putin now has a clear main adversary in the political arena.

Mr. Navalny had been a gadfly for years, but his poisoning last summer in what Western officials say was a state assassination attempt, followed by his daring return to Russia, sharply raised his stature. The Kremlin denies any involvement in the poisoning.

“For me, this is basically a revolution,” said Tatiana Stanovaya, a nonresident scholar at the Carnegie Moscow Center, referring to the new breadth of Mr. Navalny’s support. “We’re going to see a long period of confrontation between the opposition and the authorities, and it’s very hard to say how it will end.” 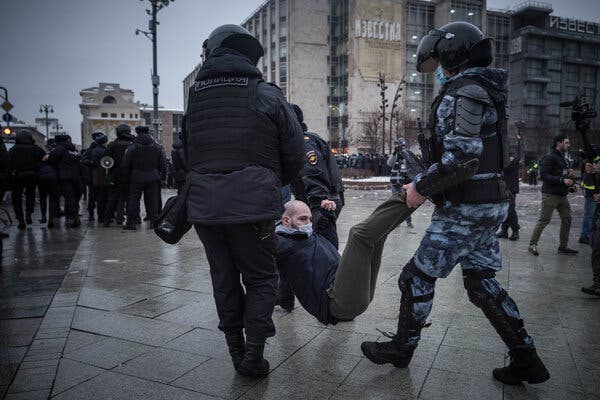 A protester being detained Saturday in Moscow. Mr. Navalny’s poisoning and his return to Russia have greatly increased his stature and bolstered criticism of the Kremlin.Credit…Sergey Ponomarev for The New York Times

In Vologda, about 300 miles north of Moscow — one of the many far-flung cities that saw surprisingly large crowds — the roughly 1,000 protesters rallying for Mr. Navalny included Communists and coronavirus deniers, according to a journalist there. Some people spray-painted “Putin is a thief” and an obscenity on the walls of the regional administration.

The journalist, Sergey Gorodishenin, explained the large turnout by people’s accumulated resentments over injustices in the judicial system, local parks being built over and the hardships of the pandemic.

“I think the next protest will see more people, not fewer,” Mr. Gorodishenin said. “We’ve never seen anything like this in Vologda.”

In 2012, more than 100,000 people demonstrated in Moscow. In 2017, Mr. Navalny spawned another wave of nationwide unrest. In 2019, the contested run-up to Moscow City Council elections set off a summer of protest in the capital. And last summer, thousands of people rallied weekly in the Far Eastern city of Khabarovsk in support of a popular governor who had been arrested after falling out with the Kremlin; more than six months later, the governor remains behind bars.

Analysts are closely watching how prominent figures in Russian culture and business react to the protests. Last week, for instance, social networks were abuzz that the Russian pop star Alla Pugacheva had unfollowed her pro-Putin ex-husband on Instagram and followed Mr. Navalny.

A judge has ordered Mr. Navalny, right, to remain in custody for 30 days.Credit…Pavel Golovkin/Associated Press

Ms. Stanovaya said that the size of Saturday’s protests had given Mr. Navalny the sort of political legitimacy that could lead more people in the Russian elite to support him, at least privately. A more violent response to future protests — on Saturday, the police clubbed protesters but refrained from intense methods like tear gas — could have further unintended consequences.

“People are expecting an increase in violence on the part of the regime,” Ivan Kurilla, a historian at the European University of St. Petersburg. “The optimistic scenario is that such things provoke some kind of crack in the elites.”

Signaling that they would follow a hard line, the Russian authorities announced a series of criminal cases against protesters, including for the crime of blocking streets.

Playing in Mr. Navalny’s favor is that his blunt, populist, anti-corruption message has struck a chord with a cross-section of society. His investigation published last week into Mr. Putin’s supposed secret palace — complete with details like an $850 toilet brush — has been viewed more than 80 million times on YouTube, and the Kremlin seemed forced to take note.

“Putin is definitely not fixated on toilet brushes,” the state television host Dmitri Kiselyov intoned Sunday evening in a rebuttal of sorts. “He is a person of a completely different scale.”

On Saturday, a team led by Aleksandra Arkhipova, a Moscow social anthropologist, polled a random sample of 359 protesters in the capital and found that 42 percent of them had not attended a demonstration before this year. When the team surveyed the 2019 Moscow protests, that figure was 17 percent, she said.

Russians took to the streets in support of Mr. Navalny in more than 100 Russian cities — protest on a scale unseen in the country in years.Credit…Sergey Ponomarev for The New York Times

Mr. Navalny, she said, makes Russians think twice about problems such as corruption that they might otherwise simply take for granted.

“Navalny says things that practically every resident of Russia knows to be true in the depths of his soul,” Ms. Arkhipova said. “He says we should not accept this — that this is not the natural order of things.”

One of Saturday’s first-time protesters in Moscow was Maria Zhuravlyova, a 29-year-old manager at a technology company. She had come out with her friend Grigory Orlov, 25, to oppose censorship and rights violations under Mr. Putin.

“A lot has piled up for people,” she said. “I think we have a long road ahead of us.”