NEW DELHI — Thousands of protesting farmers poured into New Delhi on Tuesday as they used their tractors to pull barricades apart, prompting the police to fire tear gas and throwing into chaos an event that posed a direct challenge to the government.

The farmers protesting India’s new farm laws had been expected to start a procession of tractors through the city at noon local time, to avoid interfering with morning celebrations marking India’s Republic Day holiday in central Delhi. But farmers began to dismantle barricades about two hours early amid some apparent confusion among protesters.

The protest had already threatened to upstage the annual celebration of the inception of India’s Constitution. Prime Minister Narendra Modi oversaw a lavish military parade, and news channels showed surreal scenes of Mr. Modi saluting officers as chaos broke out in several parts of the city just a few miles away.

As evening fell in New Delhi, at least one person had died and many parts of the city still felt under siege. It was unclear whether the security forces, or the farm leaders who appeared to have lost control, could push the protesters out of the city and back to the campsites they have occupied for the past two months at the capital’s borders.

“Farmer agitators broke the agreed terms and started their march much before the agreed time,” the Delhi police said in a statement, confirming that several members of the force had been wounded, without providing numbers. “The agitators chose the path of violence and destruction.”

At the city’s border with the village of Ghazipur, where farmers have been camped out for months in protest, tractors pushed aside a shipping container placed to block their route as police stood by helplessly. Elsewhere, thick clouds of tear gas rose over approved march routes as farmers on tractors, on horses and on foot forcefully began their rally hours ahead of schedule.

The farmers waved flags and taunted police officers, TV news showed. They also breached the Red Fort, the iconic palace that once served as the residence of India’s Mughal rulers, and hoisted a flag atop the fort that is often flown on Sikh temples. Many of the protesting farmers are from Punjab, a predominantly Sikh part of the country.

Many farmers carried long swords, tridents, sharp daggers and battle axes — functional if largely ceremonial weapons. It appeared that most protesters were not wearing masks, despite India’s Covid-19 outbreak.

“Once we make it inside Delhi, we’re not going anywhere until Modi repeals the law,” said Happy Sharma, a farmer from the neighboring state of Uttar Pradesh who was among 27 people riding in a trailer behind a tractor. 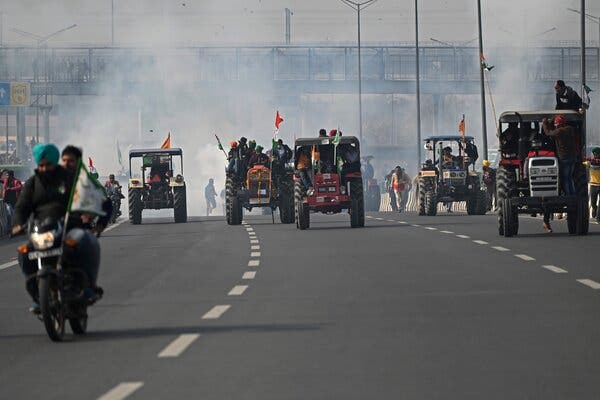 Large groups of tractors and protesters broke away from the approved protest routes — tipping over buses and violently clashing with overwhelmed police officers armed with bamboo batons — as they marched toward central Delhi.

By early afternoon, Delhi police commanders had deployed officers carrying assault rifles. Television footage showed them in the middle of key roads, staring down the protesters, rifles aimed at the crowds. In some areas, police officers beat protesters with their batons to push them back.

Some of the most violent clashes occurred at a junction near India’s income-tax office and an old headquarters of the police force as protesters tried to break a final barrier and force their way toward the city center. Angry farmers retreated and drove their tractors on a side road that led away from the city, only after the police fired several volleys of tear gas.

Local television channels showed farmers placing the body of a protester in the middle of a road nearby. They said the man had been shot, but that could not be independently verified. New York Times reporters in the area saw wounded people being carried away who said they had been hurt when a tractor tipped over. CCTV footage aired on local television showed one tractor flipping after crashing into a police barricade at high speed.

The Indian government temporarily suspended internet services in border areas that for months have been hubs of protest, an official at India’s home ministry confirmed.

The demonstration, after the central government failed in its frantic efforts to prevent the tractor march, illustrated how deeply the deadlock with the farmers has embarrassed Mr. Modi. Although he has emerged as India’s most dominant figure after crushing his political opposition, the farmers have been persistent.

In September, Mr. Modi rushed through Parliament three farming laws that he hopes will inject private investment into a sector that has been troubled with inefficiency and a lack of money for decades. But farmers rose up, saying that the government’s easing of regulations had left them at the mercy of corporate giants that would take over their businesses.

As their protests have grown in size and anger, with tens of thousands of farmers camped out in the cold for two months and dozens of them dying, the government has offered to amend some parts of the laws to reflect their demands. The country’s Supreme Court also intervened, ordering the government to suspend the laws until it reaches a resolution with the farmers.

But the farmers say they will not stop short of a repeal, and they have begun increasing pressure. In addition to their tractor protest on Tuesday, they have announced plans to march on foot to the Indian Parliament on Feb. 1, when the country’s new budget will be presented.

Tensions were high leading up to Tuesday, with some officials claiming that the protests had been infiltrated by insurgent elements who would resort to violence if the farmers were allowed inside the city. Just days earlier, the farmers’ leaders brought in front of the media a young man they claimed to have detained on suspicion of a plot to shoot the leaders on Tuesday to disrupt the rally. Neither set of claims could be independently verified.

The farmers’ leaders said they were trying to win the hearts and minds of fellow Indians by taking their protest into the capital.Credit…Rajat Gupta/EPA, via Shutterstock

There was some confusion about the scope and size of the tractor march before it was to begin. Reports in the local news media, citing documents from the Delhi police, said the march would begin only after the high-profile Republic Day parade in the heart of New Delhi had culminated. The reports also said the number of tractors and how long they could stay inside the city had been capped.

But farm leaders at a news conference on Monday said there were no time restrictions or limits to the number of tractors, as long as they stuck to the routes set out by the Delhi police. Maps of the routes suggested a compromise between the farmers and the police that could allow the protesters to enter the city but not get close to sensitive institutions of power.

The leaders said that about 150,000 tractors had been gathered at the borders of the capital for the march, that about 3,000 volunteers would try to help the police with keeping order, and that 100 ambulances were on standby.

The farm leaders, in statements given to the marchers as well as during the news conference, repeatedly appealed for peace.

A group of Sikh protesters hoist a religious flag, known as a Nishan Sahib, atop a minaret of the Red Fort monument in New Delhi.Credit…Dinesh Joshi/Associated Press

“Remember, our aim is not to conquer Delhi, but to win over the hearts of the people of this country,” they said in instructions posted online for marchers, who were told not to carry weapons — “not even sticks” — and to avoid provocative slogans and banners.

“The trademark of this agitation has been that it’s peaceful,” said Balbir Singh Rajewal, one of the movement’s main leaders “My request to our farmer brothers, to our youth, is that they keep this movement peaceful. The government is spreading rumors, the agencies have started misguiding people. Beware of it.

“If we remain peaceful, we’ve won. If we turn violent, Modi will win.”