Because this year marks the 50th anniversary of his groundbreaking 1971 film, “Shaft”; because two fine shows of his pioneering photojournalism are currently on view at the Jack Shainman galleries in Chelsea; because a suite from his influential 1957 series, “The Atmosphere of Crime,” is a highlight of “In and Around Harlem,” now on view at the Museum of Modern Art; and because, somehow, despite the long shadow cast by a man widely considered the pre-eminent Black American photographer of the 20th century, he is too little known, the time seems right to revisit some elements of the remarkable life, style and undimmed relevance of Gordon Parks.

Last born of 15 children, he made a career of firsts.

Born Gordon Roger Alexander Buchanan Parks in Fort Scott, Kan., on Nov. 30, 1912, he attended segregated schools where he was prohibited from playing sports and was advised not to aim for college because higher education was pointless for people destined to be porters and maids.

Once, he was beaten up for walking with a light-skinned cousin. Once, he was tossed into the Marmaton River by three white boys fully aware that he could not swim. Once, he was thrown out of a brother-in-law’s house where he was sent to live after his mother’s death. This was in St. Paul, at Christmas. He rode a trolley all night to keep warm.

The road to fame had plenty of detours. 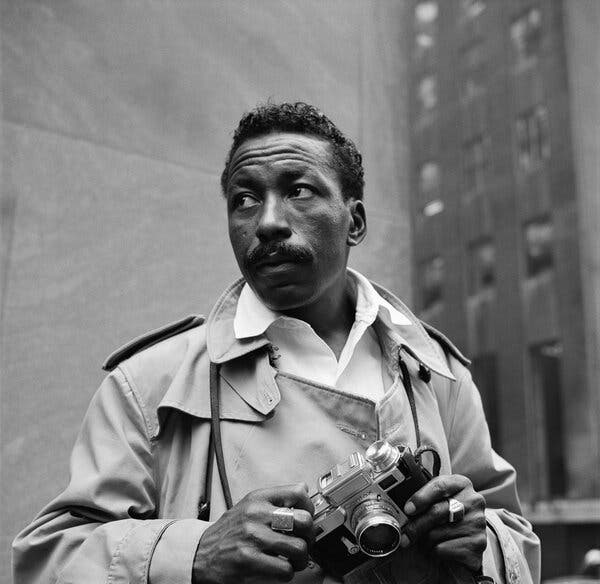 On the job or off, Parks favored crisp white shirts and belted trench coats.Credit…via The Gordon Parks Foundation

He got his break shooting dresses.

As passengers have done everywhere and always, those on the North Coast Limited between Chicago and Seattle tossed their onboard reading when they were done. Parks scavenged the well-thumbed magazines and, taking them home, discovered both the Depression-era images of photographers like Dorothea Lange and the exotic spheres depicted in Vogue.

He bought his first camera at a pawnshop in Seattle in 1937 and taught himself how to use it. Returning to the Minneapolis area where he had lived for a time, he scouted work shooting for local department stores. All except one rebuffed him.

This, as it happened, was Frank Murphy, the most fashionable boutique in the city, a shop with a running fountain, a resident parrot and a clientele that ran to women from the Pillsbury, Ordway and Dayton dynasties and who relied on the buyers there to supply them with things like “telephone dresses,” for those who considered it unseemly to take calls in dishabille.

By legend, it was the owner’s wife, Madeleine, who insisted that her husband hire the fledgling photographer despite his inexperience, for reasons never made clear. The bet paid off, though, since the images Parks produced promptly resulted in more work, a local exhibition and a telephone call from Marva Louis, then the wife of the world heavyweight boxing champion, Joe Louis, who encouraged him to relocate to Chicago, where he began taking portraits of society women. It was a career transit compressed in a sequence of events so implausible as to seem cinematic. Yet, for Parks, it was just a beginning.

“From the start, Parks knew how to make a beautiful picture,” the photography critic Vince Aletti said. And it is true that, long after Parks established his reputation with unflinching photographic series on the civil rights movement, Harlem gangs, the Black Panthers, Malcolm X and the Nation of Islam, he continued to move easily between photojournalism and the fashion work for which he maintained a lifelong regard — and which , along with his access to elements of Black life largely invisible to white readers, was among the reasons he was hired in the first place by Life.

A portrait of a many-faceted professional is this frame from a 1968 contact sheet for “CBS Reports: The Weapons of Gordon Parks.”Credit…Gordon Parks Jr., via The Gordon Parks Foundation

He never looked down on fashion.

Throughout his life, fashion continued to play important enough a part in Parks’s evolution for him to write knowingly in a memoir, “Voices in the Mirror,” of Chanel’s easy classicism, Molyneux’s grace, Schiaparelli’s kooky get-ups and to liken the color of the blood shed by a murdered gang member he photographed one evening to that of a Dior gown he’d shot on the morning of the same day.

And fashion photography, with its attenuated formalism and unabashed embrace of beauty found its way into even Parks’s starkest documentary photographs, whether of farmers or fishmongers or stevedores or impoverished First Nations people in the Northwest Territory.

At first glance, one of the images on view at Jack Shainman might even be mistaken for something shot on assignment for a fashion pictorial. Photographed by Parks in 1956 in segregated Mobile, Ala., the lush color image depicts a young woman — unidentified at the time, Joanne Thornton Wilson was discovered decades later and honored by the Gordon Parks Foundation, incorporated in 2006 to preserve and promote his work — and a girl standing on a sidewalk outside a department store neatly dressed in white pumps, a lace dress and crinolines and patent leather Mary Janes. Above their heads hangs a chilling neon sign reading: Colored Entrance.

“Black people at the time were not even being seen by most other photographers,” Mr. Aletti said, referring to Parks’s series “Restraints: Open and Hidden.” “Being a Black photographer, he dignified Black people. He made them look their best even when they were wearing overalls.”

Parks, ever stylish, in a Stetson and denim jacket on the set of his autobiographical film, “The Learning Tree.”Credit…via The Gordon Parks Foundation

Cool, as everyone knows, is a trait that can be possessed but not acquired. You either have it or you do not. “Gordon was cool before I knew what cool was,” the CNN anchor Anderson Cooper recently told this reporter. Mr. Cooper’s relationship with Gordon Parks began in boyhood and continued until the older man’s death in 2006, at age 93. Throughout that time, Parks maintained a close friendship with Mr. Cooper’s mother, the heiress and entrepreneur Gloria Vanderbilt, one that long outlived its early romantic phase.

Cool is also tricky, as Mr. Cooper noted. It can be a loaded adjective — fraught, easy to misinterpret and just as simple to deploy dismissively. Yet, looking at paparazzi photos of Mr. Cooper’s mother and Parks through the decades, the eye often goes not to the noted society beauty with her elongated swan’s neck but to her mustachioed companion in his tuxedo or roll-neck cashmeres or Hermès cravats or Scottish tweeds.

When the academic Henry Louis Gates Jr. first met Parks, what struck him was how shockingly handsome a man he was. When Frank Yablans, the onetime head of Paramount Pictures who would later hire Parks to direct “Leadbelly,” a biopic of the blues singer Huddie Ledbetter, remembered his first meeting with him, he described the dirt farmer’s son as “a New York sophisticate but with the touch of the common man.”

What astounded the actor Richard Roundtree about Parks when he was cast to play a suave and unflappable Harlem detective — and, in a sense, the first Black superhero — in “Shaft,” was how closely the character resembled the director himself.

“Make no mistake, it was his vision, totally, down to the colors on the walls and the No Name Bar,” Mr. Roundtree said recently by phone from his home in Southern California. “The character of John Shaft, if truth be known, was Gordon Parks.”

At least in a sartorial sense he probably was. Although the costumes in the film are credited to the seasoned theater and film designer Joseph G. Aulisi, Mr. Roundtree said that it was Parks who escorted him to his personal tailor to outfit him for the role.

“After I signed on for the film, he took me to Morty Sills,” Mr. Roundtree said, referring to a venerable New York tailor. There the actor was outfitted with turtlenecks and tailored trousers in the muted colors the director also favored. Shaft’s leather trench coat may be the most often copied image from the film, the closest it comes to anything resembling the pimp-style ensembles that became a default of the blaxploitation films that followed “Shaft,” looking to exploit its unanticipated success.

But the rest of the wardrobe Parks chose for John Shaft — “the Black private dick that’s a sex machine to all the chicks,” as Isaac Hayes’s Oscar-winning theme song described him — is much nearer to something you’d have expected to see on James Bond. “He wanted to get that classy English feel, if you will,” Mr. Roundtree said.

Shaft both conforms to establishment dress codes and subverts them, with oversize checks and wide lapels, Christopher Laverty, the author of the blog “Clothes on Film,” said in an email. “He scared white people because he looked better in their clothes than they did.”

Seemingly whatever Parks put on his back he wore with the easy authority that emblematizes the kind of style that gets people elected to various pantheons of fashion.

“He was at ease with what he was wearing, inside his skin and not pitchforked into his clothes by stylists,” said Amy Fine Collins, a journalist and the author of “The International Best Dressed List: The Official Story.” “He had exactly the kind of style you look for in the Best Dressed List, though it is terrible he was never on it.”

Never mind, he didn’t need it.

“Gordon’s style was first of all about an ultra-relaxed masculinity,” Carol Friedman, a photographer perhaps best known for the album cover portraits she shot of many of the 20th-century’s greatest jazz, soul and classical musicians.

Ms. Friedman was often seen on Parks’s arm as he made the social rounds of Manhattan. Far from being calculated, his natty and debonair image was, she said, an extension of his fine-tuned aesthetic.

“Yes, he had his wardrobe constants,” she said. Those included a navy double-breasted blazer with gold buttons; a silk pocket square; a crisp open-necked white shirt worn with an ascot; the blended fragrances of Knize Ten cologne and Captain Black pipe tobacco. And there was the walrus mustache that he wore all his life and that became yet more arresting as Parks aged and his hair turned a snowy white.

“But the clothes were only a prop for the whole cadence of his style,” Ms. Friedman said. So palpable a quality was his magnetic cool that at an annual Christmas Day open house Ms. Friedman hosted for years at her loft in SoHo — a stellar event where Jimmy Heath might be seen rubbing elbows with Jessye Norman — one luminary outshone the rest.

“As far as my guests were concerned,” Ms. Friedman said, “there was only Gordon Parks in the room.”