LONDON — Until he was about to turn 40, Richard Osman was a TV executive with zero interest in getting in front of a camera.

Back then, in 2009, he was trying to sell a quiz show, “Pointless,” to British TV networks. In the show, members of the public compete to give obscure answers to trivia questions, and in order to explain the concept, Osman sat in for some run-throughs, playing the role of the host’s witty, fact-filled sidekick.

The BBC loved it, and had a request: Could the sidekick be someone just like Osman?

Osman decided to give it a go himself. “I thought, ‘This will be a lovely story to tell the grandkids one day, so why not?’” he said.

He expected the experiment to last a season.

Ten years later, “Pointless” is still going strong on the BBC’s main channel, regularly getting three million to four million viewers an episode. (It airs daily on weekday evenings, with a celebrity version on Saturdays.) And it’s made Osman a star in Britain, known as much for his quick wit as his height — he’s 6-foot-7.

He’s become an Everyman of British TV, someone whose humor and kindness — he never mocks contestants, no matter how wrong their answers — seem an antidote to the country’s heightened political and social debate online. The Times of London last year described him as “a friendly sage.”

Osman has become so successful that he can front shows himself: “Richard Osman’s House of Games,” another early evening quiz that he has hosted since 2017, has been getting over two million viewers a night this month. And The Daily Mail, a tabloid newspaper, regularly writes about his private life — even his trips to the shops.

His move from behind the camera turned out to be surprisingly easy, he said. As a producer, he was responsible for telling presenters how to improve a show, to better engage with guests or speed up. “Now, I do exactly the same thing, but I’ve cut out the middleman,” he said.

Osman is known as much for his height as his quick wit.Credit…Matt Frost/BBC
“Pointless” is still going strong after 10 years.Credit…Sam Shepherd/BBC

Now 50, Osman, is finding success in another world entirely: whodunits.

In September, he released his debut novel, “The Thursday Murder Club,” a murder mystery set in a plush retirement village in southern England where a gang of retirees share autopsy photos as often as gin and tonics. It has sold over 835,000 hardback copies in Britain, a figure beaten only by Dan Brown’s “The Lost Symbol” and J.K. Rowling’s “Harry Potter and the Deathly Hallows”). And Steven Spielberg’s Amblin Entertainment has bought the movie rights.

Osman has already written a sequel, scheduled for release this September, and said he was about to start work on a third.

He seems to have discovered what Britain likes to read as much as what it watches.

“I think his success comes from the fact he was behind the scenes so long,” Mat Osman, Richard Osman’s brother, who is also a novelist, said in a telephone interview. “He’s spent — God! — 20, 25 years, learning about what entertains people,” he added.

“Richard loves looking at TV ratings and often laughs about how the ratings rarely reflect what media types are raving about on Twitter,” Lucy Prebble, the playwright and writer for TV shows like “Succession,” said in an email. “Rather than what people pretend to like, Richard knows what people actually like,” she added: “I guess that now includes him.”

Osman traces his success back to his childhood, when he became obsessed with TV. His father left when Osman was 8, and he was brought up by his mother, a schoolteacher, in a small town about 40 miles south of London.

His love of TV partly resulted from having nystagmus, a condition in which the eyes move rapidly of their own accord, greatly impairing vision. “I’d sit right next to the screen and see everything,” Osman said, describing TV as his “constant companion” at the time.

The eye condition also meant that he couldn’t rely on visual cues in conversations. “It means I’m really, really, really good at listening,” he said. “I don’t miss a trick.” 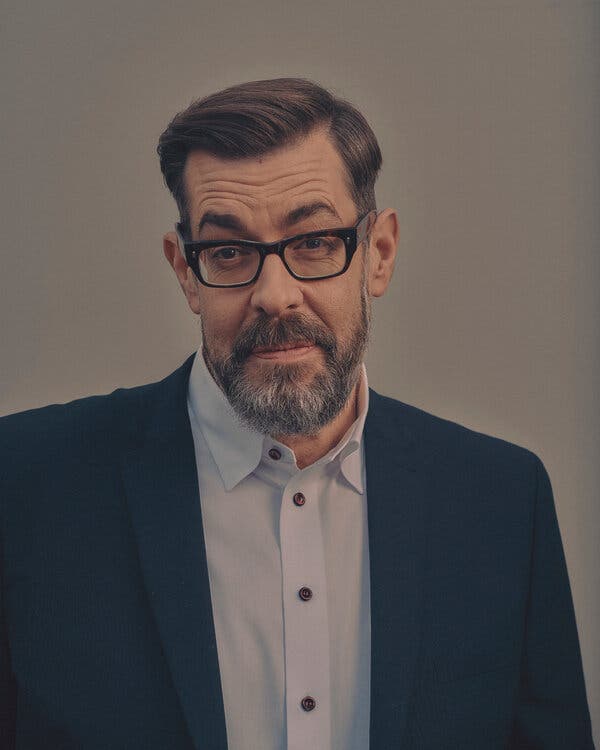 Prebble, a friend of Osman’s who met him while acting as a panel show guest on one of his pilots, said this careful listening gave him a quick wit and empathy that’s perfect both for unscripted TV and for his book writing. “He’s very good at seeing the swathes of people who have humanity and importance but are culturally ignored,” Prebble said.

Osman said the idea for the book had come about while visiting his mother at a retirement village. While there, he would chat with people, marveling at their life stories, he said. He also became engrossed by the little feuds that developed in the bridge club and who got to use the swimming pool, said his brother Mat, who often accompanied him.

Then one day Osman was struck by a thought: What if someone were murdered?

As a fan of British crime stories, Osman considers this train of thought perfectly normal. “You can’t really be in a beautiful secluded part of the English countryside without thinking, ‘Oh man, someone’s going to get murdered soon,’” he said.

He started writing that night.

Reviews of “The Thursday Murder Club” have focused a lot on its warmth. “It’s not the whodunit that keeps you turning the pages, it’s the heartwarming characters, the insightful and poignant observations and the sparkling wit,” wrote Charlotte Heathcote in The Daily Mirror, one of Britain’s biggest tabloid newspapers. Alfred Hickling, writing in the Guardian, called it “an amiable if undemanding cozy caper.”

Osman said the idea for his first novel came to him while visiting his mother at a retirement village.

Osman seemed slightly annoyed by the “cozy” comments. “I really throw the kitchen sink at the characters,” he said.

But he seemed less upset that reviewers also continually mention the book’s “diverse cast.” Osman’s gang of sleuths is led by the quick-witted Elizabeth, an upper-class woman with a mysterious past, and also includes Ibrahim, a former psychiatrist. Then there’s Bogdan, a Polish builder who is obsessed with chess (a potentially pointed choice given that Polish tradesmen have been at the center of debates around immigrant in Britain).

Osman said he wanted his characters to reflect what Britain is actually like.

“I’m someone who came from an era and a place in the south of England that was almost entirely white, which had zero diversity,” he said. “But I find myself in the world now that isn’t that, and that world is a far happier, kinder, nicer, more interesting, more entertaining, more exciting world.”

“That’s what I would, of course, choose to write about,” he said, adding that it was part of his “own plodding way” to move the world in a progressive direction.

Osman said his TV background had helped his writing of the novel. Devising a quiz or a murder mystery is essentially the same process, he said: making a complex plot, with lots of moving parts, feel seamless.

He also acknowledged that the two sides of his career are linked in another way: His work has mainstream popularity, but broadsheet critics don’t tend to lavish it with praise.

Yet Osman insisted that he wasn’t irked by that. “I would love to be considered cooler than I am,” he said, before adding that this was unlikely to happen for him.

“This is what comes out when I tell my truth,” he said. “Lovely, hopefully funny, hopefully warm, hopefully intelligent, mainstream stuff.”