SALISBURY, England — On a recent Saturday afternoon, Margaret Drabble, 83, sat beneath the soaring arches of Salisbury Cathedral, swinging her legs back and forth under her chair like a schoolgirl.

Minutes earlier, in a booth near the cathedral’s entrance, she had received her first shot of the Pfizer-BioNTech vaccine against the coronavirus. But that wasn’t why she was looking so happy, she said. Instead, it was from the elaborate organ music gently reverberating in the cathedral’s interior.

“Oh, I just love the organ,” said Drabble, a former schoolteacher. “It’s so beautiful, it almost makes me cry every time I hear it.”

“I’ve always wanted to play it,” she said, wistfully. Then, she looked toward the organ’s 4,000 pipes at the front of the cathedral and sat up straight to listen. She had been told to stay put for 15 minutes, to make sure she did not develop an allergic reaction. 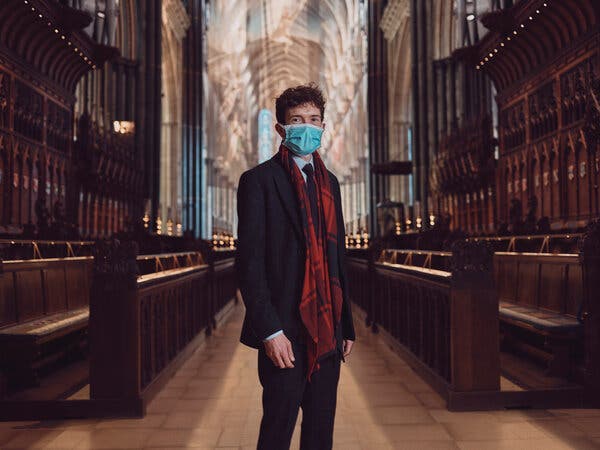 Britain is in the middle of a mass vaccination drive, racing to outrun the spread of the virus as a new variant discovered in the country surges. So far, some 6.3 million people have received a first dose, just under 10 percent of the population.

England’s National Health Service has signed contracts with dozens of large venues that will operate as vaccination centers. On Monday, it announced 33 new locations, including a soccer stadium in Oxford, several sports centers and a concert arena.

Patients have been getting the vaccine at Salisbury Cathedral since Jan. 16, and it hosts the inoculation sessions twice a week for around 1,200 people a day. Sessions last about 12 hours, and, for most of that time, David Halls and John Challenger, the cathedral’s organists, provide a musical backing, ranging from well-known hymns to fairground tunes and euphoric classical works.

That makes the cathedral one of the few places in the country one can hear live music right now. With much of Britain under lockdown restrictions for the third time, theaters, museums and concert halls have been forced to shut. But in recent weeks, the British government’s race to vaccinate its population has provided some cultural venues with a surprising lease on life.

Some — like the Thackray Museum of Medicine in Leeds, in northern England, and the Hertford Theater, just north of London — have become vaccination centers, taking advantage of their large, well ventilated spaces and experience with managing crowds. Visitors now line up to receive shots, instead of to look at display cases or sing along to musicals.

At least one well-known London attraction, the Science Museum, is being considered, according to local officials, and even circus operators have offered their big tops.

“Somewhere in the Universe,” a mobile by the artist Daniel Chadwick, hanging above the cathedral’s vaccination booths.Credit…Tom Jamieson for The New York Times

Salisbury Cathedral is, of course, more of a religious venue than a cultural one. But beyond the organ accompaniment, anyone inoculated in the 13th-century Gothic building in southwestern England can also marvel at its architecture and contemplate several artworks throughout its grounds, including a huge reclining figure by the sculptor Henry Moore and a tapestry by the contemporary British artist Grayson Perry.

On Saturday, few visitors were looking at those, but several were listening attentively to the music.

“I live locally, and we’ve all been saying, ‘Have you been to the organ recital yet?’” said Pam Scoop, 86. “We don’t say, ‘Have you been for a jab?’” she added, using a British term for a shot. She then closed her eyes to listen to Halls play the uplifting Bach chorale “Jesu, Joy of Man’s Desiring.”

Nicholas Papadopulos, the cathedral’s dean, said he had offered the building as a vaccine hub as soon as he heard that a successful shot had been developed. “Our thought was a lot of elderly, vulnerable people who hadn’t been out of their homes very much in the last year, if at all, would be coming,” he said, adding that the team wanted to “create an environment that is welcoming and reassuring and soothing.”

“The obvious solution was to make music,” he said.

“We didn’t want anything too spiky or unpleasant or anything too fast,” David Halls, the cathedral’s music director, said of the song selection.Credit…Tom Jamieson for The New York Times

David Halls, the cathedral’s music director, said he had started by playing famous classical pieces from the likes of Bach, Mozart and Handel. He said he then decided to branch out, playing show tunes like “Old Man River” and English music-hall hits like “I Do Like to Be Beside the Seaside,” hoping they would stir happy memories among older listeners.

“The phrase ‘smooth classics’ was what came to mind,” Halls said. “We didn’t want anything too spiky or unpleasant or anything too fast.”

John Challenger, the cathedral’s assistant music director, said that some local residents had started emailing requests. Someone had suggested a work by the Australian organist and composer George Thalben-Ball, he said; on Saturday, someone else emailed to ask for a piece by Olivier Messiaen, including the time they would like the work played.

Dan Henderson, one of the doctors overseeing the center, said the cathedral was a perfect space for vaccinations, as its large, drafty space lowers the risk of catching the virus. The music was a bonus, he added, but it did have a medical benefit because it lowered people’s anxiety. “It’s changing this from a medical intervention to an event,” he said, “and that really makes patients at ease.”

There was only one, occasional, downside, he added. “We’ve had patients sit in the observation area for half-an-hour listening to the music, when they’re only meant to be there for 15 minutes. So sometimes it is actually impeding the flow of patients,” Henderson said. “But I think that’s quite a lovely problem to have.”

Many visitors on that recent Saturday seemed to have that urge to stick around and enjoy the music. Sue Phillips, 77, was sitting in the waiting area with her husband, William, after getting a shot. The organists were taking a break, and she seemed disappointed by the silence.

“It’d be lovely if the organ were playing,” Phillips said. “All these old people, including us, have had a year deprived of culture, music and beauty, then we get a chance to get our jab to organ music.”

But shortly after, the organ surged into life and the familiar notes of Hubert Parry’s “Jerusalem,” a patriotic English hymn, filled the space.

Phillips’s eyes brightened above her mask. “Oh, wonderful!” she said. “This is magical.”

Looking at her husband, she said: “I think we’ll stay for another 10 minutes.”