BRUSSELS — Desperate as doses run dry, the European Union on Friday approved its third coronavirus vaccine, while moving to restrict exports of the shot, shunning its decades-old free-trade, anti-protectionism creed amid a growing crisis.

E.U. regulators authorized the shot produced by AstraZeneca, even as the company and the bloc fight over AstraZeneca’s insistence that it cannot deliver as many doses as it had promised, and as the European Union falls well behind Britain and the United States in inoculations.

The export controls came in response to the spat with AstraZeneca, as well as severe shortages at vaccination centers. French and German regions have reported that they have nearly run out of vaccine, and the Madrid region of Spain has suspended its rollout for at least two weeks until fresh deliveries arrive.

Supply chain disruptions have slowed delivery of the two vaccines already in use in the European Union, from Pfizer and Moderna, creating mounting pressure on E.U. leaders to ensure that mass immunization plans stay on track.

“The protection and safety of our citizens is a priority and the challenges we now face have left us with no choice other than to act,” Valdis Dombrovskis, a top European Commission official, said Friday as he announced the export controls approved by the commission, the bloc’s executive branch. “This is a race against the clock. We cannot lose time because of vaccines not being delivered on the agreed schedule.” 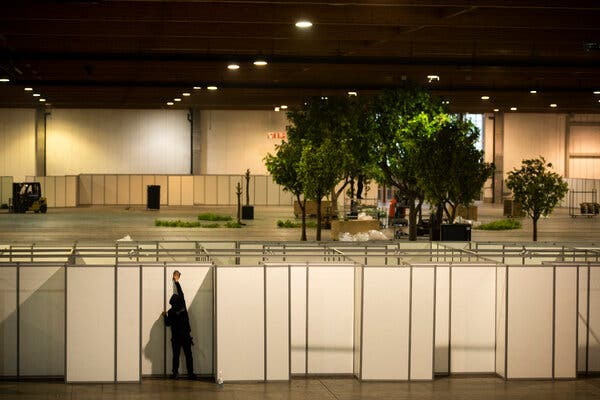 A new Covid-19 vaccination center at the Brussels Expo on Thursday.Credit…Francisco Seco/Associated Press

The measure, which takes effect on Saturday, is aimed at AstraZeneca and escalates a conflict between the European Union and Britain, which finalized its departure from the bloc just weeks ago. It empowers the Europeans to halt any export of doses manufactured within the bloc unless the maker first meets its supply obligations to the 27 E.U. member states.

AstraZeneca, headquartered in Britain, developed its vaccine in cooperation with the University of Oxford, and is producing it at multiple plants, in Britain and on the continent. Britain authorized use of the vaccine in late December, a month ahead of the bloc, and has been receiving a steady flow of the shots.

The European Union did not make an advance purchase agreement with AstraZeneca until last fall, three months after Britain had signed one, but the bloc paid the company about $400 million to help it scale up production capacity.

AstraZeneca said this month that it would significantly cut its planned February and March deliveries to the European Union, infuriating E.U. officials, who accused the pharmaceutical company of using its promised doses to serve Britain, in bad faith and in breach of the company’s contractual obligations.

The company’s chief executive responded that he regretted the situation, but that his company had not committed to a specific production and delivery schedule, but rather to a vow to make its “best effort.”

The policy announced by the European Commission on Friday, presented as a “transparency tool,” directs pharmaceutical companies manufacturing coronavirus vaccines within the bloc’s borders — currently Pfizer and AstraZeneca — to submit paperwork alerting European authorities of any intention to move their products to non-E.U. countries.

Receiving the AstraZeneca vaccine at a center in Bath, England, this week.Credit…Adrian Dennis/Agence France-Presse — Getty Images

The commission said it reserved the right to block such exports if it determined that the pharmaceutical companies were not meeting their E.U. contractual obligations first. The policy will be in place until the end of March and will not apply to exports intended for poorer countries.

The measure could theoretically also affect Pfizer, but the commission has said it is happy with how that company has handled a supply disruption in its Belgian factory that is setting back deliveries. The company has spread the pain among its customers, which include the E.U., Britain and Canada.

In a news conference on Friday, AstraZeneca’s chief executive, Pascal Soriot, defended his company’s handling of the shortfalls, saying AstraZeneca is “absolutely focused” on accelerating the production and delivery of vaccines for the European Union.

“We’re trying to really catch up, and there’s not much more we can do,” Mr. Soriot said. “The facts are that we have enough quantity that we are delivering starting this month to the European Union, but it is not as much as we would have hoped.”

The European Commission published a heavily redacted version of its contract with AstraZeneca, which seems to afford the company many protections in case it fails to deliver. But it also includes some clauses that could be seen as favoring the E.U. interpretation that AstraZeneca is obligated to turn to other factories, including those in Britain, to fulfill its expected E.U. deliveries.

The vaccine’s authorization on Friday by the European Medicines Agency added a bit of positive news to the mix. Despite concerns that AstraZeneca’s clinical trials did not include enough older subjects, the agency approved the shot for all age groups, though some member nations may impose an age cap on its use.

On Thursday, Germany’s vaccination advisory committee, which provides recommendations to the country’s government, cautioned against using the AstraZeneca shot on people age 65 and over, saying in a draft report that “there currently is not sufficient data to assess the vaccination effectiveness above 65 years.”

The German Health Ministry, which usually follows the committee’s advice, declined to comment. Britain has been administering AstraZeneca shots to all age groups, even as British regulators have conceded that data on the vaccine’s efficacy and safety “are currently limited” in people age 65 and older. Prime Minister Boris Johnson, during a visit to Scotland on Thursday, insisted that British medicine regulators had determined it to be “effective across all age groups.”

The E.U. regulator said that while there was not enough data for a firm conclusion about vaccine use in older people, “protection is expected, given that an immune response is seen in this age group and based on experience with other vaccines.” Nonetheless the agency’s scientists left the door open for national authorities to choose the Pfizer or Moderna vaccines for older citizens.

“If there are other options, they may be preferred,” said Bruno Sepodes, a top scientist with the agency.

In the United States, the Food and Drug Administration is awaiting data from a clinical trial, which enrolled about 30,000 participants, to be released in the coming weeks, before acting on the AstraZeneca vaccine. The company is expected to have sufficient safety data from that study to file for emergency use authorization from the F.D.A. around the first week of March.