MOSCOW — Aleksei A. Navalny, Russia’s most prominent opposition leader, appeared in court on Tuesday at a hearing that could send him to a lengthy prison term in a far-flung penal colony for the first time.

The Russian authorities have signaled that they will not be swayed by public pressure to release Mr. Navalny, the 44-year-old anticorruption activist. They have put several of his top allies under house arrest, and on Sunday they deployed a huge police force in cities across Russia to quell protests calling for his freedom.

At Tuesday’s hearing, the court weighed the prosecution’s accusation that Mr. Navalny had violated parole on a three-and-a-half-year suspended prison sentence that he received in 2014.

Under the terms of that sentence, the authorities say he was supposed to check in with the prison authorities at least twice a month. But he repeatedly failed to do so last year, prosecutors said, including after being released from a Berlin hospital in September while recovering from an assassination attempt by poisoning.

In 2014, Mr. Navalny and his brother were convicted of stealing about $500,000 from two companies, a conviction that the European Court of Human Rights called “arbitrary and manifestly unreasonable.” Mr. Navalny and his allies, along with many independent analysts, see his prosecution as an effort by President Vladimir V. Putin to silence his loudest critic. 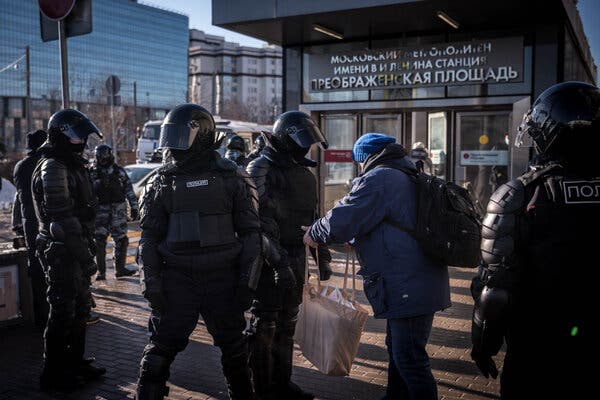 Mr. Navalny’s associates have said that only street protests can force the Kremlin to change course, and tens of thousands of people have rallied for Mr. Navalny each of the last two weekends in cities across Russia.

In anticipation of protests on Tuesday, riot police officers in body armor, camouflage and black helmets cordoned off the neighborhood surrounding the Moscow courthouse where Mr. Navalny’s hearing was held.

Officers stood in front of entrances to the nearest subway station, checking documents. Parking lots around the station were filled with police vans carrying reinforcements. At least 237 people were detained, the activist group OVD-Info reported.

In the courtroom, Mr. Navalny — confined to a glass box for defendants, as is typical in Russia — smiled often and maintained his sense of humor. When the judge, Natalia Repnikova, asked him to introduce himself, he replied, “Your honor, you forgot to introduce yourself.”

When Ms. Repnikova asked for his current address, he deadpanned: “Pre-trial Detention Facility No. 1.”

During a break in the proceeding, Mr. Navalny, in slacks and a dark hoodie, paced back and forth in his box. At one point he looked up at the depiction of the French philosopher Montesquieu and other luminaries on the grand courtroom’s wood-paneled wall.

At one point Mr. Yermolin cited online posts showing that Mr. Navalny was moving freely across Germany while not reporting for his parole last year. At another point, the prosecutor, Yekaterina Frolova, responded to an argument from Mr. Navalny’s lawyers by taking issue with the day of the week on which the defendant had contacted the parole authorities.

“Jan. 9 was a Thursday, which has nothing at all do to with a Monday,” the prosecutor said.

Mr. Navalny and his lawyers, in a lengthy back-and-forth with the prosecution, insisted that they had properly notified parole officials of his inability to report in person because of his poisoning. Mr. Navalny noted that even Mr. Putin had publicly referred last year to Mr. Navalny’s being in treatment in Germany.

In anticipation of protests on Tuesday, riot police officers cordoned off the neighborhood surrounding the Moscow courthouse where Mr. Navalny’s hearing was held.Credit…Sergey Ponomarev for The New York Times

Poking at the glass in front of him, Mr. Navalny added: “On what grounds do you say you didn’t know about my location?”

Mr. Navalny was confined to house arrest for much of 2014 and served repeated jail terms of several weeks at a time. Until now, though, he has never served a lengthy prison sentence.

Analysts say the Kremlin’s calculus has long been that Mr. Navalny could be more of a liability behind bars — as Russia’s most prominent political prisoner — than walking free as an often-controversial opposition activist.

That thinking appears to have changed as the Russian public’s frustration with Mr. Putin has increased, along with Mr. Navalny’s prominence.

In August, Mr. Navalny was poisoned with the military-grade nerve agent Novichok, in what he and Western officials have described as a state assassination attempt. The Kremlin has denied involvement.

He was airlifted in a coma to Berlin, where he recovered. He returned to Moscow last month, even though the Russian authorities made it clear that he would face years in prison.

He was jailed upon arrival, after which his team released a report by Mr. Navalny that described a purported secret palace built for Mr. Putin. The report has been viewed more than 100 million times on YouTube, energized the pro-Navalny protests and underscored the opposition leader’s ability to reach a huge audience on Russia’s mostly free internet.

But Mr. Putin seems poised to outlast the uproar over his treatment of Mr. Navalny. No signs have emerged of support for the protesters within the government, Parliament, big business or the security services, which all remain firmly in Mr. Putin’s grasp.

Fissions within the elite, nowhere to be seen at least on the surface in Russia, have been pivotal in the success of street movements in other former Soviet states.

The Kremlin on Tuesday again sought to minimize the significance of Mr. Navalny’s case, issuing a veiled warning to the European Union’s top foreign policy official, Josep Borrell Fontelles, who plans to visit Moscow this week.

“We hope that there will not be something as silly as tying the future of Russian-European relations to the case of this pre-trial detention center inhabitant,” the Kremlin spokesman Dmitri S. Peskov said, according to the Tass state news agency.