NEW DELHI — The violent outburst had receded, the farmers and their tractors had cleared the streets of New Delhi, but a large security presence still remained in parts of India’s capital on Wednesday, a sign of tense days ahead.

A day after the monthslong deadlock between protesting farmers and the government of Narendra Modi erupted into a dramatic confrontation that paralyzed the city and left one farmer dead and hundreds of police officers wounded, an uneasy quiet took hold as both sides assessed their positions. But the stalemate appeared unlikely to end any time soon.

The government has enacted market-friendly laws to overhaul the country’s struggling agriculture industry, but increasingly desperate farmers say the changes will worsen their plight, removing the little protection they have from harsh economic forces.

On Tuesday, two months of determined and peaceful demonstrations centered on protest camps on the city’s outskirts took a sharp turn, as farmers with tens of thousands of tractors pushed through barricades and poured into New Delhi, clashing with a police force that tried to push them back with tear gas and a baton charge.

The farmers’ movement has challenged Mr. Modi, the prime minister since 2014, unlike any before. Opposition parties, who have struggled to get anything else to stick to Mr. Modi, have rallied around the protesters.

The farmer leaders, however, were scrambling Wednesday on multiple fronts, after losing control of the tractor march a day earlier. Grilled in television interviews, they played down the violence and chaos as the work of a fringe group and part of a “dirty conspiracy” by pro-government infiltrators to derail a peaceful movement. 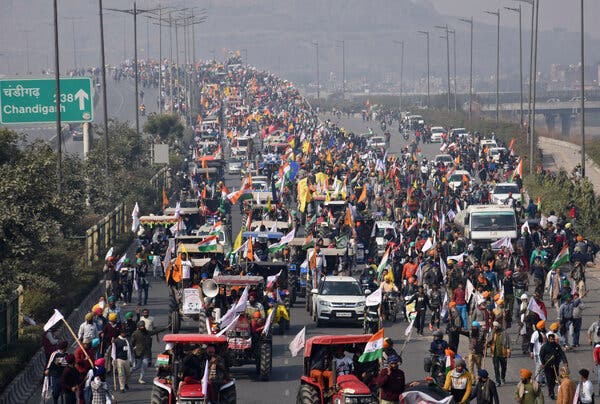 Protesters pushed through barricades and entered New Delhi with tens of thousands of tractors on Tuesday.Credit…Dinesh Joshi/Associated Press

In a sign that the violence had shaken the movement, they canceled another march to the country’s Parliament that had been planned for Monday, and instead declared they would hold a one-day fast. In private meetings they tried to quell infighting, but splits over the tractor rally came into view, with at least two farmers groups distancing themselves and saying they were leaving the protest.

In a sign that Mr. Modi’s government was weighing its next moves, there was complete silence on Wednesday from the prime minister and his most important political lieutenant, Amit Shah, the home minister, who controls the Delhi police.

The mood Wednesday at Ghazipur, one of the main protest camps, was subdued but still determined. Many of the protesters, away from their families for weeks, were back to the daily rhythms that the sprawling and elaborate tent cities have developed — making tea, frying snacks to feed thousands, and washing clothes in makeshift laundry stalls.

“We are not going back — that is not in our genetic code,” said Ringhu Yaspal, 32, who was helping wash protesters’ laundry. “Agriculture has turned into a slow poison. It’s better to die fighting here.”

Onstage among the protesters, speaker after speaker tried to rally them to continue the fight.

“We should not give a message that we are tired, that we are going home,” Jagtar Singh Bajwa, a farm leader from Uttarkand, told a couple of hundred listeners. “We will start over today, with full unity.”

Mr. Bajwa and others walked a fine line, supporting those who had ended up in the most violent areas of the march, while urging a path of nonviolence and order.

“One farmer was martyred yesterday, and he is a martyr of a fight that is about saving the people, saving the country,” said another speaker, D.P. Singh. “The way to respect his memory is to weed out the unruly elements, to not allow them to disrupt this agitation.”

The Delhi police commissioner, S.N. Srivastava, said more than 25 criminal cases, many including the names of the farmers’ leaders, were filed over the outburst Tuesday. He said nearly 400 officers had been injured, 428 police barricades broken and 30 police vehicles damaged.

“No one will be spared,” he said. “Police has all the options, but police chose restraint because we wanted to avoid loss of life and property.”

Agriculture supports, directly and indirectly, more than 60 percent of India’s 1.3 billion people but only accounts for about 15 percent of the country’s economic output. Debts and bankruptcies have been driving farmers to high rates of suicide.

The farming laws Mr. Modi pushed through Parliament in September reduce the government’s role in regulating the agriculture sector, which his allies say is no longer sustainable. They hope to attract increased private investment that they say can shore up the troubled farming sector.

The farmers say more state control is needed, not less, and that the new laws leave them vulnerable to corporate greed. They are calling for stronger enforcement of old regulations, like minimum guaranteed prices for certain essential crops, that helped India emerge from a period of hunger in the 1960s, but that they say have been largely ignored in recent years.

Gopal Krishna Agarwal, a spokesman for Mr. Modi’s Bharatiya Janata Party, said the protest leaders bore responsibility for Tuesday’s violence because they had pushed ahead with the tractor march despite government warnings that it would get out of hand.

He said the government had shown a willingness to negotiate, holding 11 rounds of talks with farmers, offering 20 amendments to the laws and agreeing to suspend them for two years so further discussions could take place. Farmers have dismissed the apparent concessions as a trick to disperse the protest.

In a sign of the uncertain days ahead, a large security presence remained in parts of the Indian capital on Wednesday.Credit…Saumya Khandelwal for The New York Times

“We understand there is serious distress in the farming community,” Mr. Agarwal said. “But, after the 11 rounds of talks, it is clear from the government side that these leaders are not going for a solution — they are continuously wanting to create a movement against the government.”

The farm laws reflect Mr. Modi’s habit of top-down decision-making, imposing his will with little attempt at building consensus. His government does not want to be seen as backing down to the farmers, but it faces growing pressure over its inability to resolve an issue that has dragged on for months, the protest camps blocking large parts of the main highways leading to the capital.

“These protests are a good illustration of what happens when institutional spaces of deliberation and consultation are reduced or even willfully ignored,” said Gilles Verniers, an assistant professor of political science at Ashoka University. “Aggrieved communities have no other alternative but to take to the street to express their concerns and demands.”

Professor Verniers added: “Such protests actually do not lead to a renewal or reprise of dialogue, since the government locked itself in a posture of unilateral decision that would make actual dialogue appear as a sign of weakness.”

The farmers, who have braved two months of cold camping on the city’s edges, have dug in their heels for nothing less than a complete repeal of the laws.

They see this movement as their best shot at getting the government to heed their demands, and they are unlikely to feel much pressure to move before mid-March, when many need to resume tending their fields.

Protest leaders tried to put the blame for Tuesday’s violence on a fringe farmers group that they say had joined hands in “dirty conspiracy” with the government and the police.

“Obviously the mainstream leadership is feeling betrayed. They see it as a setback,” said Surinder Singh Jodhka, a professor of sociology at Jawaharlal Nehru University who has studied farmers movements. “But the issues are still there and they seem very determined.”

The farmers, who have braved two months of the cold camped on the fringes of New Delhi, are demanding repeal of the laws.Credit…Saumya Khandelwal for The New York Times

Protest leaders and the police had agreed in advance that the tractor march on Tuesday would not begin until after a parade in the city center marking 72 years since India become a republic, and that farmers would stick to designated routes that would bring them inside the city but avoid sensitive areas.

One of the main points of contention afterward was how that agreement broke down, with protesters forcing their way into the city center.

Rakesh Tikait, one of the main organizing leaders, said the marchers strayed from the agreed route because they had woken up to find the police had barricaded it.

But New York Times reporters witnessed the crowds from Ghazipur pushing through the barricades, and even using tractors to remove shipping containers blocking the road, more than an hour before the agreed noontime start for the march. The police say that in other places, protesters started breaking down barriers several hours earlier.

Asked how the farmers had found themselves in another off-limits corner of the city, where some briefly occupied a historic fort, raised a religious flag on its dome, and chased away police officers who were seen jumping off what one senior officer said was a 20-foot wall, Mr. Tikait said the farmers didn’t know the city well and they had simply lost their way.

“It’s not like their tractors have GPS,” he said.