As part of The Times’s Promises Made series, I’ve looked back at Canada’s experience with becoming the first major industrialized nation to legalize recreational marijuana. One thing stood out during the many weeks I spent on this reporting: It may have been a major event, but it wasn’t a revolution. 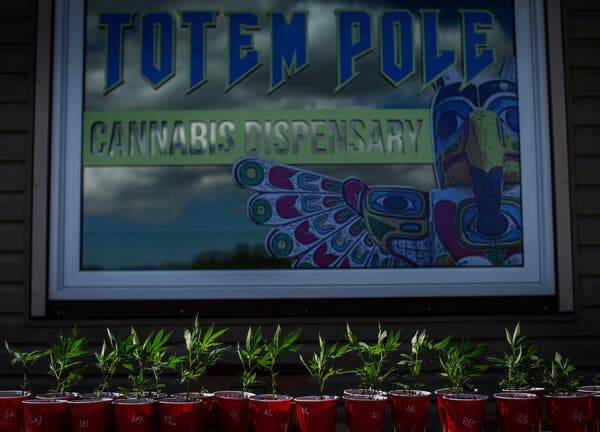 Cups of marijuana plants for sale at a dispensary on the Alderville First Nation.Credit…Tara Walton for The New York Times

“We Canadians have passed the initial phase of ‘cannabis is going to destroy us, cannabis is going to radically change our culture.’ It’s pretty evident that hasn’t happened,” said Daniel Werb, an epidemiologist and drug policy analyst at St. Michael’s Hospital in Toronto and an assistant professor of public health at the University of California, San Diego. “One of the greatest outcomes is that it was absolutely boring. Now the initial wave of kind of euphoria and awe has passed, we understand that it’s OK to make changes to this market without things radically falling apart.”

[Read: 2 Years After Legalizing Cannabis, Has Canada Kept Its Promises?]

I found that several of the government’s key promises were fulfilled, while others remain works in progress and others still will most likely be the subject of great debate when Parliament begins a formal review of the law on its third anniversary this October, a process that will probably take a year and a half.

Prime Minister Justin Trudeau pitched legalization using a fairness argument. He argued that it was unjust to make people criminals for possessing small amounts of marijuana, potentially ruining their lives.

One statistic dramatically illustrates the effect of legalization. In 2018, before the law took effect that October, the police recorded 26,402 possession cases. In 2019 there were just 46.

But I found in my reporting that there are still lingering fairness issues. While the minor possession charges that once disproportionately affected Indigenous people and Black Canadians are no more, members of those groups are notably absent from the business side of the new industry the law created. Even so, a system that would allow people to wipe out earlier marijuana possession convictions is so costly and convoluted that few people have bothered to use it. And despite promises to bring Indigenous communities into the system, the law has left shops operating on their lands in legal limbo.

The illegal market hasn’t gone away. But statistics show that consumers are shifting to the legal system and that large-scale illegal growers seem to increasingly be focused on exporting to the United States.

Mr. Trudeau vowed that a legal structure would keep marijuana from children and teenagers. Researchers I spoke with said that the arrival of a legal marijuana market hadn’t prompted much interest among teenagers in consuming it. While marijuana use over all has not risen significantly, most of Canada’s new users are well past middle age.

A marijuana shop in Ottawa in 2019. While legalization in 2018 prompted a “green rush” by investors, profits in the industry have proved elusive.Credit…Chris Wattie for The New York Times

Similarly, while it appears that there remains a lag in supplying systems and training for police to detect marijuana impairment among motorists, no one in law enforcement I spoke with believes that stoned driving has risen in a meaningful way since 2018.

Mr. Trudeau didn’t promise to create a lucrative new industry based on cannabis. But a “green rush” by investors sent marijuana stocks soaring during the lead up to legalization. Since then, profits in the industry have proved elusive, share prices have tumbled and top executives at many companies have been shown the door.

A second article about what I found on the business side of Canada’s marijuana industry will appear soon. One thing is that Canadians should brace themselves later this year for a heavy push by the industry to be allowed to advertise and promote marijuana in the same way that brewers and winemakers sell their products. The current system for marijuana is more like the rules surrounding cigarettes and effectively bans marketing and ads.

If that happens, expect the industry’s lobbying to be challenged with equally vigorous arguments from the health and addiction research community that allowing alcohol marketing was a major mistake that should not be repeated with marijuana.

Feigang Fei’s Montreal restaurant, Cuisine AuntDai, got a welcome lift this month after a tweet about his bluntly honest online menu went viral.Credit…Nasuna Stuart-Ulin for The New York Times

A native of Windsor, Ontario, Ian Austen was educated in Toronto, lives in Ottawa and has reported about Canada for The New York Times for the past 16 years. Follow him on Twitter at @ianrausten.

How are we doing?
We’re eager to have your thoughts about this newsletter and events in Canada in general. Please send them to [email protected]

Like this email?
Forward it to your friends, and let them know they can sign up here.