ROME — The Italian prime minister resigned on Tuesday and triggered the collapse of the government.

This sort of thing happens all the time in Italy. But the return to a familiar state of political instability has never happened in the midst of a pandemic that has seared the country so deeply.

After offering a terrible preview to the West of the misery wrought by the coronavirus, Italy is again an unfortunate vanguard. It is testing whether a country, even one well accustomed to governments that perennially dissolve and reform, can manage vaccine rollouts, national curfews, business restrictions and enormous economic bailouts during a full-blown political crisis.

“Italy is a great mess but also a great country,” said Agostino Miozzo, the coordinator of the powerful scientific committee that largely recommended the lockdowns and emergency restrictions adopted by the outgoing prime minister, Giuseppe Conte. “It’s a country used to governing in emergencies and living in emergencies.”

Italy is far from the only country to undergo political upheaval during the pandemic, as evidenced by the storming of the U.S. Capitol this month. But Tuesday’s government collapse weakened the decision-making apparatus of a nation that has already seen more than 85,000 of its people killed by the virus. 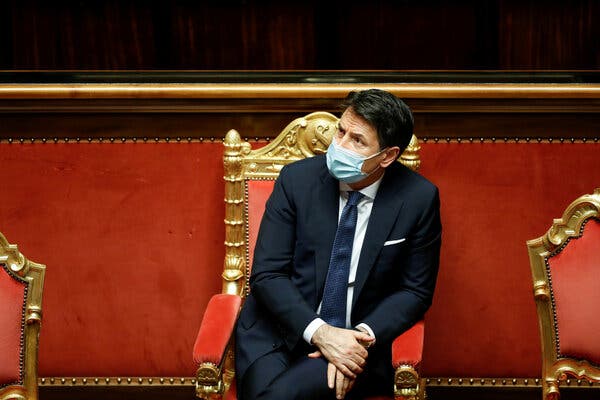 Mr. Conte and leaders of the governing coalition have denounced former Prime Minister Matteo Renzi for causing the crisis.Credit…Yara Nardi/Reuters

The question is whether a government collapse in a country that has had more than 65 governments in the last 70-odd years actually matters when it comes to running the Covid response.

As long as the political crisis is short-lived, the answer appears to be no.

“Time is essential,” said Roberto D’Alimonte, a political scientist at Luiss University in Rome. He said that if the crisis is short, as he expects it to be, it will have little impact on the mechanics of the response.

“If we come out of this with a more solid majority, it could be better,” Mr. D’Alimonte said.

On Tuesday, Mr. Miozzo was presiding over a meeting on the vaccine rollout, restaurant openings and problems with schools at the same time Mr. Conte was tendering his resignation to the Italian president, Sergio Mattarella.

Mr. Mattarella will hold consultations with parliamentary leaders for the rest of the week to choose from several options. He will decide whether Mr. Conte or someone else can garner enough support to govern, or if a limited technocratic government is a better option. If not, early elections might be necessary.

In the meantime, Mr. Conte’s government will remain in a caretaker capacity.

As Italy’s political forces maneuver for an edge and for more influence in the government to come, the country’s leading health officials are offering assurances that the country is not descending into Covid-fueled anarchy. Italy, they said, could successfully navigate the pandemic on autopilot in the short term.

“Cruise control,” was how officials in the Tuscany region put it. And constitutional scholars said the fact that Italy is already in a state of emergency allows even a transitional government to exercise extraordinary powers when it comes to the virus.

But some other top officials voiced concerns about practical hurdles if the crisis drags on or if the failure to put together a stable political majority prompts new elections.

Sandra Zampa, Italy’s under secretary for health, said she feared an “absurd” political crisis would result in a lack of direction at the top of government, the ramifications of which she said were best seen in the United States, with its rising infections and loss of life. She worried that calling new elections would “paralyze everything” and render the caretaker government a lame duck.

While Italy’s health response would remain the same as long as key ministers and technicians stay in their jobs, Ms. Zampa said, a cabinet shake-up and a weak government “would make management much more difficult.”

Already, she said, protesters have gathered to chant “we disobey,” restaurants have opened illegally and regions have challenged the methodology that triggered their lockdowns. The words of the government and its ministers, already weakened by the crisis, could carry less weight and their decisions could be less effective.

Mr. Miozzo, the science adviser, called the political crisis a form of “madness” and said that while there was no immediate impact on the country’s pandemic response, he did have concerns about potential coordination problems between the central government and the regions, where the vaccine rollouts and lockdown restrictions are executed.

An outdoor cafe in Naples. Italy is testing whether a country can manage vaccine rollouts, curfews, business restrictions and economic bailouts during a full-blown political crisis.Credit…Ciro De Luca/Reuters

The governors of those regions largely belong to the conservative political opposition that would prefer new elections, which would likely benefit Matteo Salvini, the leader of the nationalist League party.

Several of those governors have already sought to diverge from the government’s position on a variety of issues, including managing vaccines and opening schools. The crisis, Mr. Miozzo said, “could translate into action” even on vaccines, including the regions’ “different priorities on who to inoculate.”

“This is the real worry,” he said, that the regions “in some way feel freer to adopt locally decided and defined measures.”

Walter Ricciardi, a World Health Organization adviser to Italy’s Health Ministry, shared that concern but said the vaccines were controlled by the central government and he doubted the regions would suddenly start immunizing whomever they wanted.

All of the tension, he said, was nevertheless counterproductive.

“The virus is not interested in political positions,” Mr. Ricciardi said. “And when there are not governments up to the task of making decisions, it spreads unfazed.”

Mr. Conte and leaders of the governing coalition, composed of the center-left Democratic Party and the populist Five Star Movement, have denounced former Prime Minister Matteo Renzi for causing the crisis.

Mr. Renzi hastened the collapse of the government when he withdrew his support for Mr. Conte.Credit…Angelo Carconi/EPA, via Shutterstock

Mr. Renzi hastened the collapse of the government when he withdrew his support for Mr. Conte, who was unable, after a week of frantic searching, to replace his votes in Parliament. Mr. Renzi’s endgame was not exactly clear, but he is not the only one in the government who gains from Mr. Conte’s premature departure.

Mr. Renzi said he pulled the plug because of Mr. Conte’s mismanagement of the pandemic, his lack of vision in deciding where to allocate hundreds of billions of euros in recovery funds that Italy is set to receive from the European Union, and his undemocratic methods in empowering unelected committees.

Mr. Renzi’s critics, who are many, say he endangered Italy’s response to the pandemic for a political gambit. But his supporters made the reverse case, that the government was hiding behind, and exploiting, the pandemic for political protection, and that its argument made little sense precisely because, as the government’s health officials said, the crisis had no immediate impact on vaccination rollouts or the nation’s Covid response.

“It’s especially in the moments of great weakness that, if a government is not up to the task, it should be changed,” Ivan Scalfarotto, a member of Mr. Renzi’s Italia Viva party, who quit his position as Foreign Ministry under secretary, said on Italian television.

“It’s exactly when the ship is in the middle of a storm that we need to be sure we are on the good route to get out of the storm.”