As recently as December, the vaccine maker Novavax appeared to once again be on the brink of failure.

Manufacturing troubles had forced the little-known Maryland company, which in its 34-year history had never brought a vaccine to market, to delay the U.S. clinical trial of its experimental Covid-19 inoculation, jeopardizing its $1.6 billion contract with the federal government. And two Covid-19 vaccines made by its competitors were already shipping around the country, leaving some to wonder whether Novavax would ever catch up.

But the picture has significantly improved. The company announced last week that its vaccine showed robust protection in a large British trial and also worked, although not nearly as well, in a smaller study in South Africa against a contagious new variant.

And the scarcity of the two vaccines authorized in the United States, made by Moderna and Pfizer, seems to have made it easier for Novavax to recruit volunteers in its trial here. That speedy enrollment has put the company on track to have results this spring, with possible government authorization as early as April. If all goes right — and nothing is guaranteed — that would mean an influx of 110 million vaccine doses, enough for 55 million Americans at two doses each, by the end of June.

The potential success of Novavax’s candidate carries global implications. Unlike Pfizer’s and Moderna’s shots, the Novavax vaccine can be stored and shipped at normal refrigeration temperatures. The company is setting up plants around the world to produce up to 2 billion doses per year

“I would say, the more the merrier at this point,” said Saad Omer, a vaccine expert at Yale University.

Novavax has signed up more than 20,000 people so far in its late-stage trial in the United States and Mexico, two-thirds of its goal of 30,000 participants. If it keeps enrolling volunteers at the same pace, it will complete recruitment more quickly than the Pfizer and Moderna trials did last year. 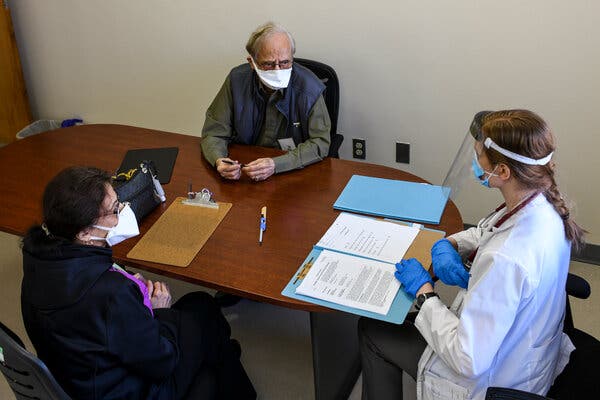 Volunteers Asha Bhjwani, left, and Ram Bhjwani, center, spoke with a doctor during a medical screening before receiving the Novavax vaccine.Credit…Kenny Holston for The New York Times

“It’s going fabulously well, frankly,” said Dr. Larry Corey, a virologist at the Fred Hutchinson Cancer Research Center and a leader of the Covid-19 Prevention Network, which is helping to oversee the trial.

Dr. Thomas Campbell, who is overseeing the trial site at UCHealth in Colorado, said he has received more than 2,000 emails and hundreds of calls from would-be volunteers. He said excitement over the Pfizer and Moderna vaccines has stoked interest in getting immunized, but their scarcity is leading some people to investigate other options. The news about Novavax’s trial in Britain has also boosted enthusiasm: 224 people have enrolled so far at his site.

“Being in a clinical trial of an experimental vaccine gets them to a vaccine sooner, potentially, than they would otherwise,” he said.

Johnson & Johnson, which recently reported that its one-dose vaccine was effective in a large U.S. trial, could receive authorization this month, but may not be able to supply the United States in significant numbers until April. AstraZeneca’s U.S. trial is also underway, and that company has a deal to supply Americans with 300 million doses of its two-shot vaccine.

But any number of obstacles could trip up Novavax’s progress. As other vaccines become more widely available, participants in Novavax’s trial could drop out of the trial. Even though its results in Britain were promising, the U.S. study could yield different results. Or the company could fail to prove to regulators that it can reliably manufacture its vaccine on a large scale. Given the likelihood that the United States may soon have three authorized vaccines available to the public, the company is under pressure to move quickly, or risk losing ground to competitors.

Novavax, based in Gaithersburg, Md., had struggled for years to bring a successful product to market, and in 2019 its stock was trading so low that it risked being delisted from the Nasdaq. Then, last spring and summer, two big deals rescued it from going under. In May, the Coalition for Epidemic Preparedness Innovations awarded the company up to $388 million to make its Covid vaccine available globally. In July, it was selected by the federal government’s Operation Warp Speed program to develop and sell its vaccine to the United States. Later in the summer, the company reported encouraging results in preliminary studies.

But the company struggled last fall to begin the U.S. trial by its earlier goal of October. Novavax has placed a big gamble on manufacturing, setting up plants around the world. But making these vaccines is a finicky and unpredictable process even for seasoned drug makers, and Novavax had trouble scaling up beyond the smaller batches needed for early trials.

Before the vaccine is authorized by the Food and Drug Administration, the company will have to show that it can consistently mass-produce the shots to the same quality as those used in its clinical trials, a high bar.

Mr. Erck said that the company is now on track to produce the 2 billion doses it has promised annually, which he acknowledged was an ambitious goal. “Some would say we’re crazy — I won’t say that, though we’re doing something that’s unprecedented,” he said.

Stanley Erck, Novavax’s president and C.E.O., at a Coronavirus Task Force meeting at the White House in March.Credit…Pool photo by Kevin Dietsch

But by the time the company had ironed out the kinks in its manufacturing, the vaccines from Moderna and Pfizer had already been authorized. Because of this, Mr. Erck said, it knew it had to approach its trial a little differently in order to encourage people to sign up, given that other vaccines were becoming available.

Instead of splitting volunteers into two equal groups — one receiving a vaccine and one a placebo — it has designed the study so that two-thirds of the participants receive the vaccine.

That was an attractive prospect for Ray Garcia, a web developer in San Diego, who signed up for the trial last month. “I was like, those are really good odds,” he said. “I just went for it.”

The company has also been granted approval from the F.D.A. to change the trial to a so-called crossover design, in which participants will receive a second round of shots if the vaccine is shown to be safe and effective. Under the plan, anyone in a placebo group would then get the vaccine in the second round, and those who received a vaccine would get a placebo. That will help reassure potential volunteers that they will eventually receive the vaccine even if they were in the placebo group.

Trial investigators have also said that they have a frank conversation with potential participants, explaining that they can drop out of the study if they are offered an opportunity to be vaccinated in the community. Some have done so, the investigators said, but not enough to jeopardize the trial.

Dr. Benjamin Luft, the principal investigator of the Novavax trial at Stony Brook University, said some volunteers dropped out after New York State opened eligibility to everyone 65 and older. “Initially, I think, our patients responded to that, and now, as time goes on, they are seeing the reality of not being able to get the vaccine,” he said.

Novavax, like other vaccine makers, has sought to diversify its pool of volunteers by focusing recruitment on groups that have been disproportionately affected by the virus, including people who are older, Black or Latino.

But a history of discrimination and unethical experimentation has made some people who belong to racial or ethnic minorities reluctant to participate in clinical trials.

“You hear about these stories and you’re like no, I’m not going to participate in any of this,” said Darnella McGuire-Nelson, who is Black and signed up for Novavax’s trial in late December.

“How do we know if the therapy or vaccine is going to work on Black people if we don’t have enough people who represent that group in the clinical trial?” said Darnella McGuire-Nelson, a vaccine trial volunteer. Credit…Kenny Holston for The New York Times

Ms. McGuire-Nelson, who works at the U.S. Patent and Trademark Office, said she learned about the trial in December while listening to the radio in her car, waiting to pick up her mother at a doctor’s appointment at Howard University Hospital. On the radio, she heard about an upcoming round table of experts, including Howard’s president, Dr. Wayne A. I. Frederick and Dr. Anthony S. Fauci, the nation’s top infectious disease doctor, who would be discussing the upcoming Novavax trial, and about the hesitancy of many Black people to take a vaccine or participate in studies. After Ms. McGuire-Nelson learned that Howard University, her alma mater, was participating in the trial, she decided to sign up. Howard is one of a handful of historically Black colleges and universities that are participating in the Novavax trial.

“How do we know if the therapy or vaccine is going to work on Black people if we don’t have enough people who represent that group in the clinical trial?” she said. “We’re the group, Blacks and Hispanics, who are dying disproportionately.”

Mr. Garcia said he was also motivated to sign up to ensure his community is represented because Latinos are one group that has been most affected by Covid-19. “If you get a flu shot every year, this shouldn’t be any different, but then again, just the word trial or clinical study scares people,” he said. “I wanted to contribute something, like, why not help science?”