Imagine this: In the wee hours one morning, during a vacation in Southeast Asia, you set off with a guide to hike to the top of Mount Merapi, a volcano in Indonesia. After a grueling, miles-long plod, you arrive at the top, just in time for sunrise. You find the perfect spot to sit. As you gaze across the fiery sky, you can sense the earth breathing beneath you. Then, all of a sudden, you hear a loud whirring from above. You look up. You see the belly of something mechanical. With horror, you realize that a Canadian guy in another hiking party has piloted his drone directly above your head. And just like that, your moment of transcendence has been snuffed out, 21st century style.

Many travelers would be enraged by such an interruption. But not Hallie Griggs Dietsch and Jeffrey Daniel Basting.

“We just started cracking up,” Mr. Basting said. “We both laughed at the absurdity of being in one of the most beautiful places on earth, and then seeing this drone.”

The shared unperturbed response was an early sign that Mr. Basting and Ms. Dietsch were compatible as a couple. So was the Southeast Asia trip itself: When they took it in 2017, they had only known each other for a few months.

Ms. Dietsch, now 35, and Mr. Basting, 34, first met in April 2017, at a concert in a New Orleans club. Ms. Dietsch had lived in the city for about eight years. Mr. Basting was a new arrival, and a temporary one: A refugee officer for the United States Citizenship and Immigration Services agency, part of the Department of Homeland Security, Mr. Basting had been sent to New Orleans to conduct asylum interviews. He was only going to be in town for two months. He was living at a Residence Inn.

“This is a chance for me to date this guy with no strings attached,” she thought. 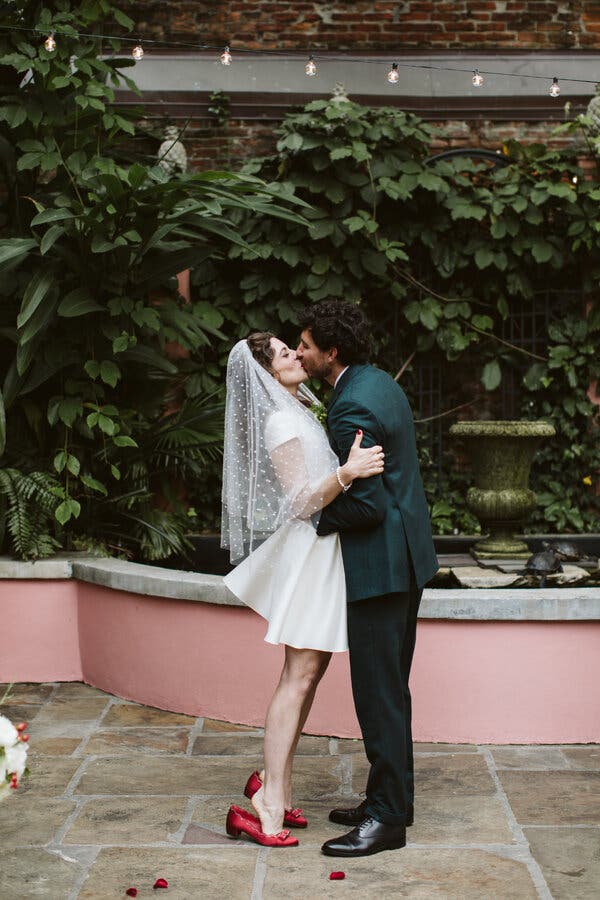 That was a welcome prospect for Ms. Dietsch not because she was averse to commitment, but because she was in the middle of a harrowing period: Her mother, Winifred Griggs Dietsch, was fighting cancer, and Ms. Dietsch was frequently traveling to Shaker Heights, Ohio to care for her. Her father, Gary Dietsch, died in 2005.

In the weeks that followed, Ms. Dietsch and Mr. Basting kept up with each other. Text messages turned to phone calls, as Ms. Dietsch traveled between Louisiana and Ohio.

“I got the sense that I was a positive distraction for her from some heavy stuff that was going on,” Mr. Basting said.

For Ms. Dietsch, the difficulty of the period meant that her attention was focused on her mother, which carried an unexpected benefit in how she navigated her budding relationship with Mr. Basting.

“I really didn’t have the capacity to think about much of anything else,” she said. “He’d text me, and I would respond. I wasn’t in my head about it at all. I wasn’t thinking about how I was coming across, or if I responded too soon, or anything like that.”

Ms. Dietsch’s mother died that May. While she and Mr. Basting had only seen each other in person a handful of times by then, they’d developed a strong bond communicating through texts and phone calls. Mr. Basting cautiously proposed an idea: He was about to go on a trip to Malaysia to process refugees from Myanmar. Would Ms. Dietsch like to meet him there and travel around Southeast Asia after his work was done? She said yes. They’ve been together since.

Mr. Basting, who still works for the U.S.C.I.S., and Ms. Dietsch, who is self-employed as a human resources and recruitment consultant, now live together in Baltimore. But they returned to Louisiana to wed, and were married on Dec. 19 in a small outdoor ceremony, which included his parents, Donna and Timothy Basting, at Brennan’s Restaurant in New Orleans. Aaron John Schwindt, a friend of the couple who became a Universal Life minister for the event, officiated.

While Ms. Dietsch had not had a long-term relationship on her mind at the New Orleans concert where she’d met Mr. Basting, it wasn’t long afterward that she felt certain she and Mr. Basting would marry: That became clear to her when they traveled in Southeast Asia. She realized that even moments which might otherwise have been dismaying, like the sunrise drone debacle, felt special.

“It felt very comfortable,” she said. “But also exciting.”