PARIS — Léna Situations shot to fame in France by sharing fashion advice and tips for living a positive life with millions of her followers on social media.

A 23-year-old of Algerian heritage whose real name is Léna Mahfouf, she has notched up 1.8 million followers on YouTube, another 2.9 million on Instagram, and won a People’s Choice Award, a coveted accolade for viral video stars. Last fall, her first book topped nonfiction charts in France for six weeks in a row — dislodged only by the appearance of the first volume of Barack Obama’s memoirs.

And then came the inevitable backlash from a prominent figure in France’s literary establishment.

“Between Being and Nothingness, Léna Situations rather leans toward the second option,” he wrote in the November column, referring to Jean-Paul Sartre’s philosophical treatise. The young author, Mr. Beigbeder wrote, was “one of the many victims of Mark Zuckerberg.”

The comments by Mr. Beigbeder, a best-selling novelist who has been a juror for several prestigious literary prizes for more than two decades, caused outrage on French social media, from Ms. Mahfouf’s followers but also from activists who saw a touch of racism and sexism in his critique. (Ms. Mahfouf brushed off Mr. Beigbeder’s column with a widely shared tweet: “Do I owe him money or what?”)

France’s literary gatekeepers are already under fire for being too insular and clubby. Critics of Mr. Beigbeder’s comments said they showed how reluctant the French literary establishment is to recognize voices like Ms. Mahfouf’s. 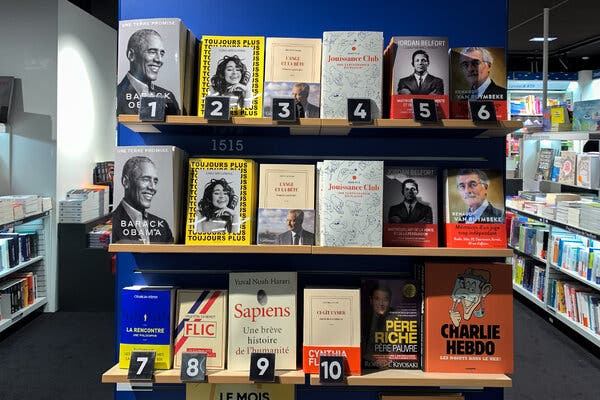 Ms. Mahfouf’s debut book ranked second in sales at a bookstore in Paris.Credit…Dmitry Kostyukov for The New York Times

“As a gatekeeper, Mr. Beigbeder aims to protect the entrance of the literary field by using a classic disqualification strategy in the world of letters: stigmatizing social media sensations,” said Delphine Naudier, a sociologist at the French National Center for Scientific Research who specializes in gender inequalities in literature.

“This text conveys envy and bitterness tinged by sexism that despises female productions,” tweeted Rokhaya Diallo, a writer and an activist for feminist and racial causes, pointing to his “need to coarsely quote legitimate culture in order to side with what he thinks is valuable.”

“I wish this young lady lasting success, but I am pessimistic,” he said. “This kind of phenomenon is temporary.” He spoke of “the quick making of stars by the media.”

Fueling the debate, and perhaps creating some sour grapes, has been Ms. Mahfouf’s highly successful writing debut. Her book, a self-help guide for young adults published this fall, has sold over 280,000 copies so far — an unusually high figure for a first-time author in France.

On average, the winners of the Goncourt, France’s most prestigious literary prize, sell around 350,000 copies, according to the market research institute GfK.

So far, Ms. Mahfouf seems to have taken all the attention she’s getting in stride.

“I love challenging myself, coming to environments where I am persona non grata and proving that I can make a place for myself,” she said in an interview in her Paris apartment, wearing a high ponytail and thick winged eyeliner. On her desk stood a nameplate saying “I am not bossy, I am the boss.”

Ms. Mahfouf is one of France’s most prominent fashion influencers, along with Sanaa El Mahalli and Marie Lopez — who have also gained millions of online followers by sharing tips on makeup and outfits, and personal anecdotes about relationships or mental health.

Last February, she covered a Balmain catwalk on YouTube at the invitation of Loïc Prigent, a well-known fashion journalist and admirer. At the time, she was relatively unknown, and she was wearing clothes made by the fast-fashion brand Zara. But her excitement and sense of humor were evident as she greeted — and was generally ignored by — the other guests.

When told that the later people come to the show, the more important they are, she joked: “We arrived before they even installed the lights — that means we are really not important.”

“You can make fun of something you love,” she said in the interview. “Fashion is a wonderful milieu, but it can sometimes be very ridiculous.”

Since the Balmain show, Ms. Mahfouf has become something of a new force on the French fashion scene. She has been chosen by Dior to promote their items online, and her purchases have gone more upmarket — Yves Saint-Laurent heels and trendy Jacquemus bags lay scattered around her living-room during the interview.

An advertisement for Ms. Mahfouf’s book on the Champs-Élysées.Credit…Dmitry Kostyukov for The New York Times

But in the eyes of her followers, Ms. Mahfouf is still accessible and down to earth. She is quick to laugh and talks with big, enthusiastic gestures, marveling on a recent morning at the large snowflakes falling outside her window.

Born of parents from Algeria who fled the country’s civil war, she grew up in a middle-class family in Paris. She started sharing low-price fashion advice and makeup tutorials on her YouTube channel five years ago, as she was juggling several odd jobs to pay for her studies in a fashion marketing school.

Her videos are often low-key and feature family and friends. In one, her father, a puppeteer who performed at schools and is currently unemployed because of the Covid-19 pandemic, makes jokes about his unfashionable clothes; in another her friend Bilal Hassani — a gay musician of North African origin who represented France in the 2019 Eurovision contest — sports a wig and makeup.

Other videos take on a more activist approach. She has expressed support for the Black Lives Matter movement, talked about her feminism and how naturally curly hair should be acceptable even if artists like Beyoncé and Rihanna have straightened theirs.

“One positive aspect of social media is that it gives minorities a space,” Ms. Mahfouf said. “I hope that this dynamic will take off from social media to real life.”

For some of her followers, part of the appeal of her channel is that her ethnic background is just not an issue, even in a country where French people of North African origin still suffer from stigmatization and discrimination.

“She shows that we are all different and therefore all the same,” said Violaine Pelillo, a 14-year-old follower of Ms. Mahfouf. “I don’t see why we should linger over it.”

With a few exceptions, like the young Moroccan-born novelist Leïla Slimani, voices like Ms. Mahfouf’s are rarely heard in the very closed French world of publishing, which is dominated by white men.

Ms. Mahfouf at her apartment in Paris.Credit…Dmitry Kostyukov for The New York Times

In 2019, she took the idea of an accessible self-help book to one of France’s biggest publishing houses, which expected to sell 20,000 copies. “Toujours Plus” has sold fourteen times more than that, and there are plans to translate it into several languages including English.

Unlike some YouTubers who hire camera operators and editors, Ms. Mahfouf spends days writing, filming and editing her videos herself. An assistant and her parents help her deal with an overloaded schedule.

“Everybody always asks me with an anxious tone where I see myself in 10 years,” she said after a week during which she had shot three videos and declined a small part in a movie and a position as a TV-show host.

“Social networks are my No. 1 priority, where I am the freest and the happiest,” she said. “And the internet won’t disappear anytime soon.”