Over the course of Inauguration Day, Brendan Smialowski photographed the security forces stationed around Washington, the arrival of national leaders and the moment Joseph R. Biden Jr. was sworn in as the 46th president of the United States.

He also took a photo of Senator Bernie Sanders of Vermont sitting cross-legged on a folding chair, bundled in a heavy coat and knit mittens, appearing unamused.

Mr. Smialowski, a staff photographer for Agence France-Presse, has been covering Washington since 2003. He has captured historical moments and traveled with presidents and other senior officials. He has won accolades from Pictures of the Year International, World Press Photo and other professional photography organizations. But his photo of Mr. Sanders received one of the higher forms of recognition available on the internet: It was memed.

The image of Mr. Sanders spread like wildfire across the internet, as social media users found new locations for him and his mittens. He sat on a bench with Forrest Gump, rode public transportation in New York City and Chicago, was a guest at the Last Supper and perched atop a metal beamalongside 11 Depression-era ironworkers. He even made it to the moon.

A photo launches a thousand memes. 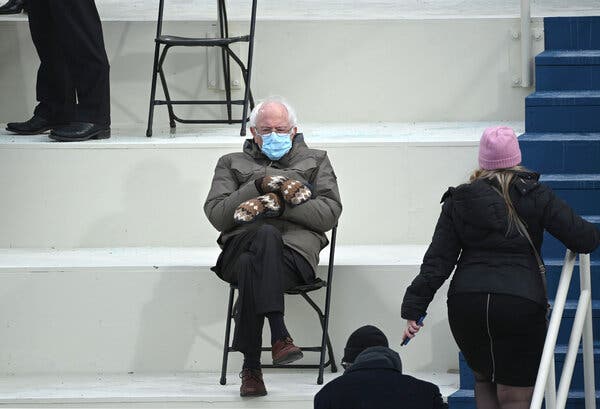 Mr. Smialowski has covered several inaugurations, but Mr. Biden’s was different by “nearly every metric,” he said in an interview on Tuesday. There was increased security, a limited and socially distanced audience and a National Mall filled with flags instead of people.

He was positioned with a direct view of both the section where the senators were seated and the stage where the ceremony would take place. Guests began trickling in. Mr. Sanders arrived around 11:30 a.m., a large envelope tucked under his arm.

“It’s like a ‘Where’s Waldo’ moment,” Mr. Smialowski said. He kept one eyelocked into his viewfinder, watching for key political figures, and the other eye on the crowd.

His camera was bouncing between Senator Ted Cruz of Texas and Senator Josh Hawley of Missouri when he noticed Mr. Sanders with his naked eye, he said.

“I just remember thinking, I need to go back to Senator Sanders,” he said. “It was just how he was holding himself, and how he was positioning on the chair. I moved over and just kind of in the moment decided it was worth taking the picture.”

He was surprised the image was sharp, he said, because it was taken from a distance with a slower shutter speed and a long lens.

Here’s what happens when a photo goes viral.

This was not Mr. Smialowski’s first viral photo. A photo he took in 2017 of Kellyanne Conway, the counselor and longtime aide to former President Donald J. Trump, kneeling on a couch in the Oval Office prompted an internet debate over proper White House decorum. Later that year, another of his photos captured a cyclist making an obscene gesture while Mr. Trump’s motorcade drove past her.

Neither of those photos generated the kind of playful response that the image of Mr. Sanders and his mittens has drawn, Mr. Smialowski said.

“I genuinely enjoy the fact that people are having a lighthearted moment from a political photo,” he said. “Things have been pretty tough for the last year and politics can be pretty nasty, and here are people just having fun.”

Asked why this particular photo had made such an impression, Mr. Smialowski said he wasn’t sure, but Mr. Sanders’s young, internet-savvy fan base most likely played a role.

Internet fame has a downside.

The downside of this particular photo going viral? It’s not the “prettiest work I’ve ever made,” Mr. Smialowski said.

“I think a picture should be like a bento box: Everything has its place and its purpose, and it all works together when you bring it in together,” he said. “But that’s not the reality of photojournalism. In my approach, composition comes second to content.”

While he doesn’t have a favorite iteration of the meme and was reluctant to single any one out, he said it was fun to “see my picture showing up in a piece of art that I’ve liked all my life.”

“It makes me smile a little bit,” he said.

He also expressed admiration for the creative internet users who have given his image of Mr. Sanders a life of its own.

“This is not my work,” he said. “This is other people sometimes just kind of mindlessly dropping a cut-and-paste job and other times taking a lot of time and effort to really kind of do something cool and make a new work. That’s pretty impressive to watch.”

Other than his bursting inbox, not much has changed for Mr. Smialowski since Inauguration Day. “Life is the same,” he said.

“The day was not really about Senator Sanders,” he said. “It’s about a lot of things. Ultimately it’s about, you know, Joe Biden becoming president. Sanders is a supporting part of that story.”