On a November evening in 2016, Bianca Hernandez attended Star Wars night at the California Academy of Sciences in San Francisco. In a room where costumed people dueled with lightsabers, she met Frank Knight, who was staffing a table while his friend took a bathroom break.

There was none of that with Mr. Knight. Rather, she found him charming and sweet.

Their interaction was brief, but in the days following, Ms. Hernandez realized she couldn’t stop thinking about him. In a Facebook group devoted to Bay Area lightsaber enthusiasts, she found him easily — in a Jedi costume.

Mr. Knight didn’t recognize her. And, he couldn’t believe that such a beautiful woman was messaging him.

Mr. Knight was flying to his hometown Eugene, Ore., early the next morning for Christmas. The two messaged each other frequently while he was away, until they met in early January 2017.

Their first dates consisted of meeting at a cafe, and then figuring out what to do next so as to prolong the time they were together.

Ms. Hernandez, 32, a marketing consultant, graduated from California State University, Chico and then got a master’s in film at the University of Southern California. She is also a self-described nerd, participating in several subcultures in addition to Star Wars, including Jane Austen, Steampunk and Harry Potter. Mr. Knight, 36, is a graduate of the University of Oregon, and is a digital video editor for starwars.com. While his passions are more singularly focused, thanks to Ms. Hernandez, he now has a favorite Jane Austen novel (“Northanger Abbey”).

In April 2017, Mr. Knight was to attend a Star Wars convention in Orlando, Fla., for work. Ms. Hernandez joined him. From then on, they found a way to see each other, daily.

Though she had long been afraid of commitment, Ms. Hernandez said she felt anxious at first, asking herself “are we in that crazy kind of relationship I’ve always wanted to avoid where you lose yourself?” Yet she realized she had never felt more grounded.

Mr. Knight said he saw his parents, who do everything together, as role models.

“While there are so many adventures we’ve had together, we just like being near each other,” he said. “It’s fun to just be in the same room and read together.”

When, in May 2019, Mr. Knight was invited to preview Galaxy’s Edge, the new Star Wars-themed area at Disneyland in Anaheim, Calif., before it opened to the public, he knew that was the perfect place to propose. He did so on planet Batuu by presenting Ms. Hernandez with a ring in a hollowed-out first edition copy of a Star Wars-themed romance novel, “The Courtship of Princess Leia.” 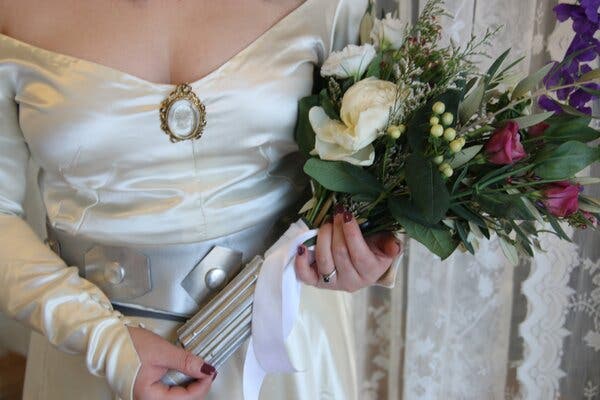 In early 2020, as they debated whether to have a Star Wars-themed wedding, the pandemic started. Instead of a celebration with a hoped-for guest list of 75-100, they married Jan. 4 in their dining room in San Francisco, which Ms. Hernandez decorated like a chapel. Fallon Lim, a senior legal processing clerk at the city and county of San Francisco, officiated remotely.

The bride and groom changed their surname to Hernandez-Knight. Ms. Hernandez wore an altered $20 vintage dress, adding a Princess Leia belt to it, for the ceremony.

“She motivates me to be better,” said Mr. Knight, who used their 3-D printer to make a lightsaber handle for his bride’s bouquet.