The Vendée Globe, a solo round the world race, had its first arrivals on Wednesday and Thursday in northern France, and one of the tightest finishes in its history. The 24,000 miles of sailing included a rescue at sea, a couple competing against each other in the event for the first time and challenging weather patterns.

Yannick Bestaven of France was declared the winner even though his boat was third to the finish line in the ninth edition of the quadrennial race, which started 80 days ago with 33 sailors, a record.

Bestaven was given a time bonus of more than 10 hours for assisting in the nighttime rescue of Kevin Escoffier less than a month into the race. That credit gave him a finishing time of 80 days 3 hours 44 minutes 46 seconds, nearly a week behind the 74-day record, set by Armel Le Cléac’h in 2016-17.

Bestaven’s time was more than two hours ahead of the second-place finisher, Charlie Dalin, who actually crossed the finish line first.

An entrepreneur and seasoned ocean sailor, Bestaven, 48, did not finish the Vendée Globe in his first attempt in 2008 because of mast trouble on the first day, but he went on to win several ocean races.

He was precise in his use of weather routing to stay close to the leaders until he accelerated at the halfway point. He led Dalin around Cape Horn by 430 miles only to fall behind by the doldrums.

“I was always setting a higher objective,” Bestaven said. “Off Brazil, I didn’t believe it anymore. Now I know, from first to last, everyone has won.” 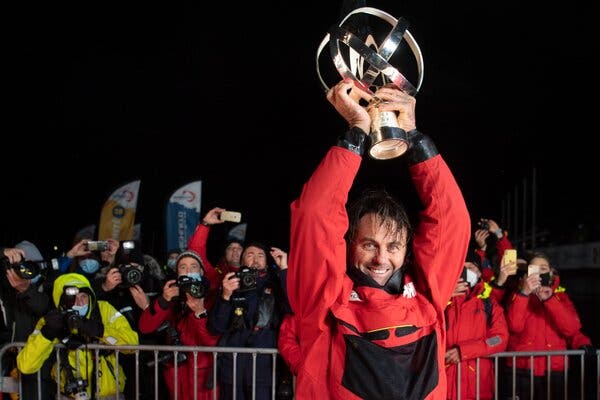 Bestaven was compensated with time for assisting in the rescue of another sailor. Credit…Loic Venance/Agence France-Presse, via Pool/Afp Via Getty Images

It was Bestaven’s bold move striking out to the west in the North Atlantic that allowed him to blaze along at 20 knots and cross the line on Thursday.

Dalin and Bestaven embraced on the red-carpeted dock before the camera lights flooded them. Dalin faded into the crowd as Bestaven was handed the heavy artistic metal globe with a sculptural sail erupting from its center.

“I thanked him for his reaction, despite the controversies of the time compensation,” Bestaven said at a news conference. “He said, ‘No controversy.’ I told him, “It will be you in four years holding this trophy.’”

Despite the pandemic, which cut budgets and preparation times in half, the skippers left Les Sables-d’Olonne, France, on Nov. 8 with a mix of old and new IMOCA 60 monohull class raceboats. Six female skippers, the most in the history of the race, were in the fleet.

By Thursday afternoon, eight skippers had finished, with the top seven coming in within 12 hours of one another, making it the closest ending to a race in which finishes are often separated by days. The 17 remaining sailors were strewn between the Falkland Islands and the Bay of Biscay.

“This has been the elastic Vendée Globe,” said Mark Turner, who managed three Vendée campaigns, including Ellen MacArthur’s in the 2000-1 race, in which she finished second. “Usually the rich get richer. This time it was compression after compression. Honestly the weather was possibly a bigger factor than talent or a new boat. You won’t see that pattern for 20 years.”

Despite the conditions, which included calm seas in the usually boisterous Southern and Indian Oceans, the rescue effort to find Escoffier defined the race and eventually the winner.

On the 21st day, 400 miles southwest of the Cape of Good Hope, near South Africa, Escoffier’s boat broke in two after running into a wave at a high speed. He sent off a quick message to his team and leapt into a life raft before the boat was awash. Bestaven, Boris Herrmann and Jean Le Cam, all running in the top five at high speeds in 15- to 20-foot waves, were asked by race officials to suspend racing and look for Escoffier.

Kevin Escoffier sat in a French navy raft boat after he was rescued by other sailors when his boat capsized in December. Credit…Paul-David Cottais/Marine Nationale, via Defense, via Associated Press

Le Cam, who finished fourth on Thursday, eventually found the stricken sailor and dropped him off on a French naval vessel. The three sailors were awarded time compensations for the rescue through a complex series of calculations by an international jury.

Bestaven and Herrmann said the rescue left them with new fears.

“It took me some time to get back in the race,” Bestaven said. “It was dawn. I was searching for a friend, telling myself he was cold, thinking how much he was suffering. As time went on I thought it was over. If his boat broke, why not ours?”

The time compensations put Bestaven and Herrmann in a duel for first. The pair were pressing their boats at 20 to 30 knots across a rainy Bay of Biscay on Wednesday night when Herrmann, a German, sailed into a fishing boat 90 miles from the finish. He was napping with radar alarms on when the two boats struck, tearing his sail, breaking one of his hydrofoils and ripping off his bowsprit. The accident destroyed his boat — and his chances for a podium finish in his first Vendée Globe.

Herrmann limped across the finish line on Thursday in fifth.

He was smiling at Thursday’s news conference, happy just to have finished.

Dalin drew expert lines across the ocean with a course connecting strong breezes in a near flawless race. He said he was also happy with his result.

“I’m not sad,” Dalin said. “The race doesn’t feel over. I’m still in the rush of the finish. They say you get the ‘Vendée blues.’ But it’s not like my program is coming to a stop. My story is still to be written.”

As Bestaven was celebrating in Les Sables-d’Olonne, Samantha Davies, who had started the race alongside Romain Attanasio as the first couple in the Vendée Globe, was making her way up the South Atlantic after leaving the race in Cape Town to repair a broken keel. She said she was continuing to finish what she started to earn more funds for her charity sponsor, Initiatives Coeur.

“This is so much harder,” Davies said in a call from her boat. “In racing, you have all this adrenaline. This is different than I had imagined. Romain and my son, Ruben, will be there at the finish. The big thing is that he knows that much of the victory is getting around the world. He will be just as proud of mum and dad. It shows him how not to give up.”

Alex Thomson of Britain, a top veteran, and seven others left the race early with boat breakages, a small number of retirements compared with previous editions. Jérémie Beyou, with one of the fastest boats in the fleet, headed back to France to make repairs and restarted 10 days after the start, ending his hopes of winning. Beyou was still at sea, with 16 others, consistently passing boats as he headed up the Atlantic.