Last March, Janez Jansa, a nationalist politician who has been compared to President Donald Trump, became Slovenia’s leader for a third time. He was previously prime minister from 2004 to 2008, and, briefly, from 2012, until a corruption scandal brought his government down.

Mr. Jansa has long been known for attacking opponents online, including news media he considers biased, as well as for opposing immigration. But since his return to power, another issue beloved of populists has become a focus: culture. 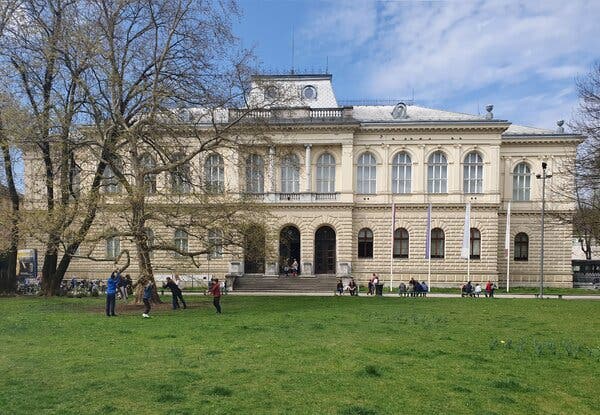 Over the past 10 months, Mr. Jansa’s government has replaced the directors of some of Slovenia’s most important museums, including the National Museum, the Museum of Contemporary History and the Moderna Galerija, an acclaimed art museum.

Artists, academics and intellectuals claim the changes are an effort to control the museums and shift them in a more conservative and nationalist direction. The government denies that: The new directors are not political appointees, but “prominent candidates” selected by public competition, said Mitja Irsic, a spokesman for the culture ministry, in an email.

Mr. Jansa’s government has also announced plans for a Museum of Slovene Independence to celebrate the 30th anniversary this year of the country’s split from Yugoslavia. Critics have described this as “nothing but a propaganda institution,” but the government has dismissed that complaint, too. Mr. Irsic said the new museum would be “a celebration of freedom,” representing no particular political ideology.

“Accusations of political interference only surface once a right-wing government is in power,” he added.

Slovenia’s culture wars don’t just concern museums. Under Mr. Jansa’s leadership, the culture ministry has terminated the leases of numerous arts organizations and charities that rent space from the government, and tried to strip a combative rapper, Zlatko, of the status of “top artist” which qualified him for benefits such as health and pension payments.

Zlatko, whose real name is Zlatan Cordic, said in a telephone interview that the government had changed his status because he had spent too much time on antigovernment protests. He challenged the ruling in court and it was reversed, he added.

Artists and activists have reacted strongly to what they see as Mr. Jansa’s attempts to reshape the country’s cultural life, with regular protests, including street demonstrations, and open letters.

Last year, protesters painted the word “shame” in huge letters outside cultural buildings around Ljubljana, the capital. In an October demonstration in front of the culture ministry, activists arranged desks labeled with the names of senior officials, then doused them in red paint. The culture ministry issued a news release that described the stunt as a death threat.

Criticism of Mr. Jansa’s cultural policies is not restricted to Slovenia. In December, 150 academics from around Europe and North America signed an open letter decrying the government’s direction. The culture ministry responded in a news release: “What is described in your petition has no common denominator with real life,” it said, adding that the signatories had been “thoroughly misled” by academics from “the Slovene radical left.”

Populist governments elsewhere in Europe are also trying to shift cultural institutions in a more conservative and patriotic direction, and many fear Mr. Jansa is copying their playbook. In Poland, the governing Law and Justice Party has replaced the directors of several museums with more ideologically aligned figures. In Hungary, Prime Minister Victor Orban has changed funding rules to gain influence over theaters.

The Slovene word for “shame” painted outside Metelkova 6, a building that once housed several arts charities, until their leases were not renewed.Credit…Borut Krajnc/Mladina

Unlike in Poland or Hungary, where populist parties have parliamentary majorities, Mr. Jansa’s government is a fragile coalition, including a center-left party and another that represents retirees. But many see similarities in the personnel changes at the top of Slovenia’s museums. Since Mr. Jansa took office, Slovenia’s culture ministry has replaced the directors of five major institutions.

The directors of publicly funded museums in Slovenia serve five-year terms, and many were scheduled to come up for renewal shortly after Mr. Jansa took power.

“On the one side there’s people who want museums to be responsible, relevant and ethical, and places of understanding and tolerance especially of minorities,” said Kaja Sirok, the outgoing director the National Museum of Contemporary History, said in a telephone interview.

“And the other side want them to be patriotic,” she added. Ms. Sirok will be replaced in February by Joze Dezman, a conservative historian who led the museum once before, as an appointee of Mr. Jansa, from 2005.

Ms. Sirok said conservatives like Mr. Dezman tended to present a highly patriotic point of view, with much focus on atrocities during Slovenia’s time under Communist rule. She had tried to make exhibitions that included a variety of political and historical viewpoints, she said, relating Slovenia’s past to contemporary issues, like immigration. Those efforts were likely to stop once she was gone, she added. (Mr. Dezman did not reply to a request for comment.)

Zdenka Badovinac, 62, who had served as artistic director of Moderna Galerija since 1993, said she had reapplied for the job when her most recent term ended last year, but lost out in a competition that was rerun several times. After one round, the culture ministry dropped a requirement that the director must have five years’ experience running a museum, she said. The ministry had also ignored the advice of museum boards — including the Moderna Galerija’s — on who should be appointed, she added.

Mr. Irsic, the culture ministry spokesman, said that the government did not always follow those recommendations, because some museum boards were dominated by left-wingers. “The Minister’s reliance on due process of picking the best candidates is the only line of defense against a politically appointed apparatus,” he said.

Two recently appointed museum directors denied in interviews that they were political appointees, or had conservative agendas.

Robert Simonisek, a well-known writer and poet who replaced Ms. Badovinac at the Moderna Galerija, said in an email that her shows had often focused on 1980s avant-garde art from Eastern Europe, but he wanted to see “a more equal presentation of the diversity of artistic voices of contemporary art.”

“I am not politically active — I represent a professional choice,” he added.

Pavel Car, a former IT company manager who now runs the National Museum, said he wanted to make the institution more suited to the digital age, and would add new virtual-reality exhibits. He would also reorder the collection to refocus on Slovenia’s history, he said. He added that this was not about promoting a nationalist agenda, but appealing to foreign tourists, who make up half of the museum’s visitors.

Mr. Irsic said the furor around museum leaders was a fuss over nothing. “Regular run-of-the-mill artists really have nothing to complain about,” Mr. Irsic said.

“There is no conspiracy of the right-wing government, nor a push to the conservative values in culture,” he said. “Freedom of expression is sacred.”

But such assurances don’t soothe the government’s critics. “Janez Jansa has an agenda to turn the country’s culture to the right — he’s been talking about it for a long time,” said Matevz Celik, a former director of the country’s Museum of Architecture and Design, who lost his job in November. “This is a cultural war.”