The baseball world and the nation at large reacted with sorrow and tributes on Friday after the death of Hank Aaron, one of the greatest to ever swing a bat. Former players, executives, commissioners and U.S. presidents honored a man who faced down withering racism with courage and strength to become the all-time home run leader and so much more.

“He was a great friend, a great American and a great player,” Bud Selig, the former commissioner who was close friends with Aaron for 62 years, said in a telephone interview.

Although Aaron surpassed Babe Ruth’s record for most home runs and eventually set a new mark of 755, and still holds the record for most runs batted in (2,297), extra base hits (1,477) and total bases (6,856), he has somehow been overlooked in many conversations about the best players in the history of baseball.

But many of Aaron’s contemporaries, and others who came later, insist that no one was better than the player known as Hammerin’ Hank.

“We all felt like that,” Dusty Baker, Aaron’s teammate and close friend, and the current manager of the Houston Astros, said in a brief conversation before he was overcome with grief. “But Hank knew how good he was. For me, he was the greatest I was ever around.”

Aaron is one of several baseball legends who have died over the past several months, including Tom Seaver, Bob Gibson and Al Kaline and more recently Don Sutton and Tommy Lasorda. But Aaron’s stature as a leader and pioneer for racial equality made his loss more acute even beyond baseball, where three former U.S. presidents issued statements to recognize his passing.

Jimmy Carter called Aaron a dear friend and said, “he has been a personal hero to us. A breaker of records and racial barriers, his remarkable legacy will continue to inspire countless athletes and admirers for generations to come.”

Barack Obama called Aaron humble and hardworking, noting that “Hank was often overlooked until he started chasing Babe Ruth’s home run record, at which point he began receiving death threats and racist letters — letters he would reread decades later to remind himself, ‘not to be surprised or hurt.’ Those letters changed Hank, but they didn’t stop him.”

As a player, Aaron was known for power, but he compiled an excellent batting average. He was a .305 hitter over his career and led the league in batting twice, collecting 200 hits three times. He ranks third in hits with 3,771. Among the most intriguing of all his remarkable statistics, he made a record 25 All-Star teams in 23 years (in four of these seasons there were two All-Star games).

“You think of Hank, you think of home runs,” said Joe Torre, the Hall of Fame manager who played alongside Aaron for nine years with the Braves, “but you sort of forget about everything else he could do. He was a great base runner, and he stole a lot of bases, but only when it meant something to the team.” 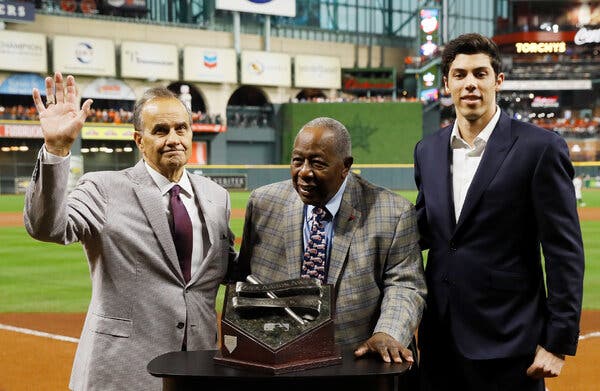 The Most Valuable Player Award is named after Aaron, who participated in presenting it to Christian Yelich of the Milwaukee Brewers in 2019.Credit…Pool photo by Matt Slocum

Selig, whose friendship with Aaron dates to 1958 when they both lived in Milwaukee during Aaron’s years with the Braves there, said Aaron was the best he ever saw.

“Look, I’m partial,” Selig said. “I understand Willie Mays was phenomenal, but I am partial because we were so close, and if you saw Henry play as often as I did, oh my goodness. Just look at his lifetime stats. Wow. I’m just so sad today.”

Ken Singleton, the Yankee broadcaster, played against Aaron for five years in the National League from 1970 to 1974 and two more in the American League after Selig brought Aaron back to Milwaukee with the Brewers to finish his career there in 1975 and 1976. As a young Black player coming up, Singleton said Aaron was always gracious, approachable and supportive.

“When he came onto the field you noticed,” Singleton said. “there was a regal feeling about him. If you just turned on the TV and saw someone rounding the bases after a home run, you would know it was him. He just went around like it was another day at the park, and for him, it really was.”

Singleton marveled at how seldom Aaron struck out — always fewer than 100 times in a season. From his perch in the outfield, Singleton used to study the swings of right-handed batters and he said Aaron’s bat speed was different, even toward the end of his career.

“The last six inches of his swing were just a blur,” he said. “I never saw that from anyone else.”

After he retired, Aaron returned to the Braves to become their farm director and later worked for the team in many capacities. He still had an office at the stadium and worked out in the training room.

“He basically is the Braves,” said Derek Schiller, the president and chief executive of the club. He added, “I know there are a lot of guys who wore the uniform, but none like Hank.”

Chipper Jones, the Braves Hall of Fame third baseman, called Aaron a mentor and said that many of Jones’s contemporaries, including superstars, would ask him to introduce them to Aaron. But despite their reverence, they did not fully appreciate Aaron’s unique place in baseball lore.

“No, they don’t know how good a baseball player he was, “Jones said. “He played for the Galactic All-Stars. We were just mere earthlings.”