CAIRO — The last guest had checked out, leaving Ahmed Taha sitting on an unmade bed in a deserted room amid rumpled sheets and half-drunk coffee cups, contemplating his future.

The pandemic was the final blow to his hostel in central Cairo, a jaunty little place on Tahrir Square offering $35 rooms and panoramic views of the elegant Egyptian Museum across the street. First the foreigners vanished, then the Egyptian overnighters, he said. Now just the thrum of traffic, seeping through an open window, filled the silence.

But the transformation of Tahrir Square, he said, started long before Egypt’s first case of Covid-19.

He pointed to the area where, a decade ago this month, hundreds of thousands of Egyptians massed to oust their autocratic ruler, Hosni Mubarak, in a howl of revolt, the zenith of a surge of uprisings across the region that became known as the Arab Spring.

Now he hardly recognized the place. The grassy circle where euphoric revolutionaries once partied has been smothered in concrete. In its place rose a grandiose monument — the centerpiece of a $6 million renovation intended to spruce up shabby Tahrir in the style of the stately plazas of Europe.

At the heart of the square, an ancient obelisk mounted on a plinth was guarded by four ram-headed Sphinxes, recently transported from the ancient temple at Karnak, still hidden in their boxes. Behind it, a long line of buildings had been repainted in khaki. Fancy new lights studded granite steps. Security guards roamed the sidewalks.

The effect was of a fancier yet more impersonal Tahrir, both militaristic and pharaonic — exactly what President Abdel Fattah el-Sisi, who ordered the changes, surely wanted.

Tahrir Square — a throbbing tangle of traffic, staging ground for revolutions, and, in recent years, a field of broken dreams — has long occupied a special place in Egypt’s culture and history. Since it was carved from a patch of swampy land by the Nile more than 150 years ago, the sprawling plaza has been both a totem and a threat for Egypt’s rulers. 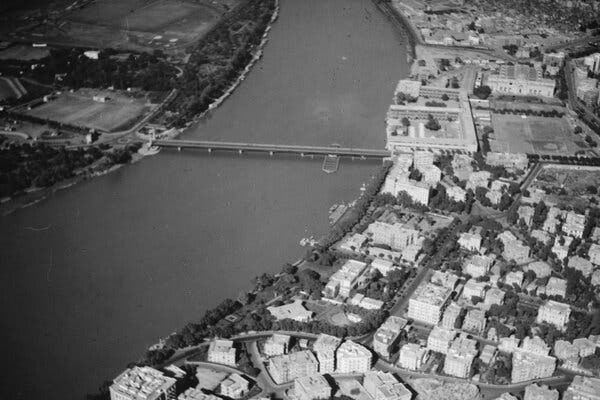 Tahrir Square in 1941, when Egypt was a British protectorate.Credit…Bettmann/Corbis

For some, the roar of the Tahrir crowd vaulted them to power. For others, like Mr. Mubarak, it was their Waterloo: where they confronted the rage of the people, and met their downfall.

“Tahrir is sacred land,” says a demonstrator in “The Square,” an Oscar-nominated documentary about the 2011 uprising and its tumultuous aftermath. “If you control it, you have power. It pulls people to you.”

Tahrir was born of the whim of a vainglorious ruler. In the mid-19th century, the Ottoman viceroy, Khedive Ismail Pasha, built a network of elegant boulevards, imitating Paris, that converged on a space that was named, at first, after himself: Ismailia Square.

After the British took over, in 1882, Tahrir was at the heart of the colonial project, home to a large military barracks where a young officer named T.E. Lawrence — Lawrence of Arabia — proposed his first expeditions across the Middle East. But Tahrir turned against the colonists in 1919 when a countrywide revolt swept Egypt, hastening Britain’s exit.

It was renamed Tahrir, or Liberation, Square after the 1952 Free Officers’ revolution, when Egypt’s swaggering new military ruler, Gamal Abdel Nasser, razed the British barracks and replaced it with the headquarters of the Arab League — a nod to the swelling tide of Arab nationalism.

Tahrir also became a symbol of the Egyptian state, where citizens trudged through the labyrinthine corridors of the Mugamma, a hulking office block that squatted in one corner, to plea for stamps and permits from bribe-seeking bureaucrats.

But Nasser and his successors discovered that the power of Tahrir could be turned against them, too.

A memorial service for King George V of Britain in 1936 at the Kasr el Nil barracks in Tahrir Square.Credit…Wellcome Library
Egyptians took to Tahrir Square in 1953 to celebrate the first anniversary of the coup that deposed King Farouk.Credit…Ronald Startup/Hulton Archive, via Getty Images

Shawki Akl, a left-wing student who circulated in the downtown cafes around Tahrir in the 1970s, periodically took to Tahrir to protest Egypt’s sorrows and humiliations. He raged against Egypt’s failure to recapture Sinai from Israel in 1973 and, four years later, was on the front line of deadly bread riots that rattled President Anwar Sadat’s authority.

“Tahrir has the two faces of Egypt,” Mr. Akl said. “It is the face of the bureaucratic state, and it is the place where people make revolutions. They complement each other — maybe.”

Now in his 70s, Mr. Akl runs a business, lives in a nice house in a plush suburb and, like any Egyptian with a keen sense of self-preservation, tends to steer clear of politics. Even so, he could not hide his disdain for Tahrir’s new look.

“El-Sisi has made the square into a military camp, with a flag that we are supposed to salute every day,” he said. “For what? This is not Egypt.”

Once in power, though, he moved briskly to erase every trace of the revolution. Graffiti was scrubbed from the walls, and murals were painted over. Security officials and snitches flooded the square. Protests were outlawed.

The last step was to change the face of Tahrir. Even as the pandemic tightened its grip this summer, work continued on Mr. el-Sisi’s revamp. But while many Egyptians admired the changes, few dared to linger there.

The new Tahrir Square, with the obelisk of Ramses II in its center and buildings repainted in kahki, gives off a militaristic and pharaonic air.Credit…Khaled Desouki/Agence France-Presse — Getty Images
Protests by supporters of Gen. Abdel Fattah el-Sisi at Tahrir Square in 2013 helped lead to the ouster of Egypt’s first democratically elected president, Mohamed Morsi, and paved the way for General el-Sisi to become president.Credit… Khaled Desouki/Agence France-Presse — Getty Images

Walking through Tahrir one evening, I stopped to rest on a new bench outside the Mugamma, which had also been smartened up. A security guard appeared. “Keep moving,” he told me.

But the Mugamma is moving, too. Under an ambitious plan to radically reshape Cairo, Mr. el-Sisi has ordered the Parliament and government ministries to move from the city center to a $60 billion administrative capital under construction in the desert, 25 miles away.

Mr. el-Sisi insists the new capital will ease the pressure on Cairo, a bulging megalopolis of 20 million people. His critics discern a less noble motive: to drain Tahrir of its relevance by shifting the locus of power to a remote location, where few Egyptians will be able to gather and make their voices heard.

What remains in Tahrir, then, are the ghosts of 2011, as well as a space where the defiant and the desperate still come to mount quixotic stands against the government.

In 2019, a 35-year-old man named Ahmed Mohey walked into Tahrir holding a sign that read “Step Down Sisi” to register his anger over a devastating train crash that he blamed on corruption and incompetence. Within minutes he was bundled into a police van.

We’re in a banana republic! he shouted, before vanishing into a maximum-security prison.

Days later, a young American made a similar stand. Mohamed Amashah, 24, from Jersey City, N.J., held a sign calling for the release of the tens of thousands of political detainees in Egypt’s crowded prisons. He quickly became one of them.

“You think you’re a hero now?” a security official sneered as Mr. Amashah was led away.

A rare rash of antigovernment protests swept through Tahrir last year. They were quickly crushed by the authorities, who arrested 4,000 people but were visibly worried by the sudden explosion of fury.

Now they were taking no chances on a repeat.

When I visited one afternoon last fall, athletic young security officials, pistols hanging from their belts, were perched on bridges over the Nile and stopping pedestrians on Tahrir, searching their backpacks and scrolling through their cellphones. Armored vans filled with riot police circled endlessly around Mr. el-Sisi’s grand new monument.

I ducked into the Egyptian Museum, where I was less likely to be detained. I had the place to myself. But the museum was changing too — its most famous treasures, including Tutankhamen’s gold mask, were being moved out to the Grand Egyptian Museum, a gleaming $1.1 billion project, near the pyramids, that Mr. el-Sisi hopes to open with lavish ceremonies in June.

Mr. el-Sisi appears to be trying to strip Tahrir Square of its power, including by moving government buildings to a new capital being built in the desert 25 miles away.Credit…Khaled Desouki/Agence France-Presse — Getty Images
The most famous treasures of the century-old Egyptian Museum on Tahrir Square are being moved to a new museum near the pyramids of Giza.Credit…Khaled Desouki/Agence France-Presse — Getty Images

An elderly guide, lounging by the entrance, offered an impromptu tour. We meandered through the exhibits to Egypt’s ancient rulers  — once-powerful pharaohs, now trapped inside granite sarcophagi and alabaster jars filled with their mummified guts.

The exhibits spoke to enduring truths about the nature of power in Egypt — hubristic tales of ambition and recklessness, triumph and disaster. Now, though, those leaders were ranked by their placement in the century-old museum.

Those who left great legacies — pyramids, treasure, art — were highlighted in prominent displays. The pharoahs who failed, victims of bad luck or their own misjudgment, had been relegated to dusty corners, forgotten by time.

Where Mr. el-Sisi, whose security officials prowled the square outside, might rank is hard to say. Ruling Egypt is an unpredictable business, as Mr. Mubarak could testify.

In any event Mr. Taha, the hotelier, wasn’t waiting to find out.

A man was coming in a few hours later to snap up his beds and air-conditioning units. Then he would be off, he said, leaving with his family for Tunisia to try their luck there.

He sighed. He didn’t want to go, he said. Despite the troubling changes, his heart remained in Cairo.

But for now, he felt, there was no choice.