Annabel Yao is a fresh-faced college graduate with big dreams. She wants to be an entertainer and is putting in the work to make it happen.

She is also a member of China’s rarefied elite, the youngest daughter of the billionaire founder and chairman of the telecommunications giant Huawei who proclaimed her debut at a time when China seems to have turned on its many high-flying tycoons.

So when Ms. Yao, 23, launched a highly polished publicity blitz last week — including a 17-minute “making of” documentary, a magazine cover and a music video — the response was savage.

Ms. Yao’s tone — opining about her social status, her struggles, her up-by-the-bootstrap pluck — seemed to strike a nerve in a country that is still emerging from a public health crisis and an economy that has left millions out of work, even as the country itself broadly recovers.

The blitz ignited outrage online about privilege and decorum, and fueled the sort of populist resentment about once-unthinkable wealth that the Communist Party tries to keep in check.

She was ridiculed as self-indulgent, insincere and insensitive. At one point in the documentary about her professional journey, she asks why her older half sister seemed more likable to the public.

To the masses on the Chinese internet, Ms. Yao seemed oblivious to the fact her sibling, Meng Wanzhou, is the chief financial officer of their father’s company. She also happens to be under house arrest in Canada awaiting possible extradition to the United States, which many described as a greater hardship than the entertainment business. 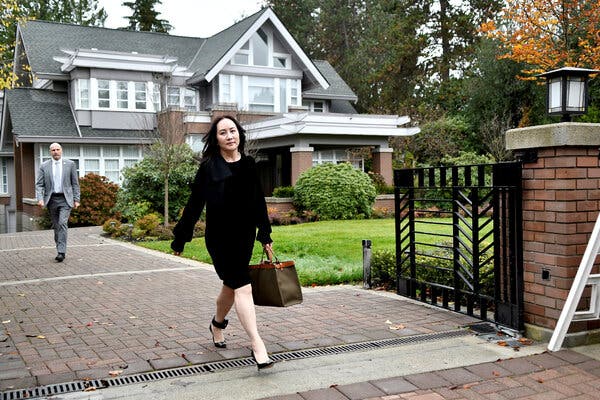 Meng Wanzhou, the chief financial officer of Huawei, and Ms. Yao’s sister is under house arrest in Canada. Credit…Jennifer Gauthier/Reuters

“People work for the capitalists during the day and have to be forced to watch their ugly children at night,” one person wrote on Weibo, the social media site, where Ms. Yao posted her music video. The song, sung in a mix of Chinese and English, is called “Backfire.”

There was a time not long ago when China’s newly rich — and their scions, known as fuerdai, or “second generation rich” — flaunted their wealth and status. In the go-go 1990s and 2000s, when the country opened up and let its economy blossom, the rest of society looked on in awe as these princelings posted videos of burning money or posing next to the family Lamborghini.

In today’s China, though, the mood seems to be shifting. The pandemic has left the wealthiest even better off, in China as elsewhere, widening an already yawning gap between the haves and have-nots. (The list of China’s wealthiest families added $1.5 trillion to their personal wealth over 2020, according to the Hurun Report, which tracks them.)

China’s increasingly powerful leader, Xi Jinping, has waged a campaign against corruption, jailing businessmen and officials who deviated from the Communist Party’s vision, which he has repeatedly urged everyone to embrace. Not even Jack Ma, China’s most famous and, until recently, richest entrepreneur, has been spared the government’s scorn.

Discretion, not ostentation, has now become the norm when it comes to wealth. And judging from the public reaction, Ms. Yao’s media blitz was anything but discreet.

China’s billionaire class, including Jack Ma, the co-founder of Alibaba, has come under increased scrutiny. Credit…China Stringer Network, via Reuters

“I think she’s a lightweight compared to her sister,” said Hung Huang, a cultural critic and publisher whose mother once worked as Mao Zedong’s translator and English tutor.

With the documentary, Ms. Hung added, Ms. Yao wanted to fashion herself as a kind of Chinese Kardashian, embodying beauty and celebrity, entertainment and entrepreneurship as she launched a career that seemed at this point still vaguely designed.

“I don’t think she will influence society,” Ms. Hung said in a telephone interview. “I think she’s way more influenced by Chinese society, especially the internet world. She just confirmed what the Chinese public expects out of rich kids in China.”

Ms. Yao is the youngest of three children of Ren Zhengfei, the hard-charging leader of Huawei, who has been compared to Steve Jobs for his role in building a company prized in China for its ability to compete with big multinational telecommunications companies like Cisco, Nokia and Ericsson.

Ms. Meng and a half brother, Ren Ping, are the children of Mr. Ren’s first marriage. The son is the president of Huawei subsidiaries that own hotels and import food and wine.

Huawei has become the focal point of a geopolitical battle between China and the United States as the Trump administration has sought to curtail the country’s technological advances. Ms. Meng, who was for years the public face of the company, was detained in Canada in 2018 on an arrest warrant from the United States, where she faces charges of financial fraud related to evading sanctions against Iran.

Ms. Meng’s fate throughout what has turned into a long extradition process has soured views toward the United States. Chinese officials have portrayed her as an innocent victim of a highly politicized case to damage the company.

Public sympathy for the Huawei dynasty, however, slipped badly after a company employee was jailed for 251 days; he had sued the company for a bonus and was jailed for disclosing commercial secrets, though the charges were eventually dropped. It was a story that brought to the fore the concerns of a middle class increasingly facing economic hardship for the first time after decades of explosive economic growth.

Ms. Yao, the daughter from Mr. Ren’s second marriage, unquestionably grew up in privilege, perhaps more than her older half-siblings. She traveled widely, living in Shanghai, Hong Kong and Britain, according to her own biographical descriptions. Her globe-trotting was such that she recently had to fend off the Chinese news media’s questions about her nationality, saying she was born in Kunming, a city in southern China and carries a Chinese passport.

In an interview in 2019, her tycoon father described his admiration for her demanding schedule with studies and ballet lessons — as many as 15 hours a week in middle school. “They have high demands on themselves,” he said of his children.

Ms. Yao, who graduated from Harvard seven months ago, studied computer science and danced with the Harvard Ballet Company. In the documentary, she said she “kept trying different things” after feeling lost following graduation before devoting herself to this career path. She has since signed with TH Entertainment, a promotion company based in Beijing.

Ms. Yao at a Dior Fashion show in Paris in 2020. Credit…Francois Durand/Getty Images

Her media blitz was timed with her 23rd birthday, which was last Thursday, and has already landed her a fashion shoot in the Chinese edition of Harper’s Bazaar, a cover of OK and an appearance in an advertisement for Great Wall Motors. (Neither Ms. Yao nor TH Entertainment responded to requests for comment.)

Ms. Yao seemed to anticipate a backlash because of her background. “I have some questions about the word princess,” she says at one point in the documentary, which include vignettes of dance and voice lessons, gym workouts and meetings about developing her brand. “People on the internet might call me a princess or something, but will it cause some negative emotions if I call myself a princess?”

In the end, they called the documentary, “Exceptional Princess.”

In a publicity poster for it, she sits with her arms folded and her lips slightly pursed in a pout. She wears black, thigh-high boots, digging a stiletto heel into an ornate crown at her feet.